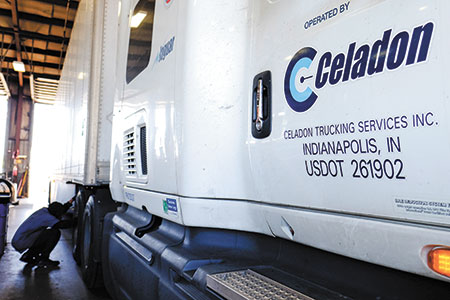 Federal prosecutors in late April accused the Indianapolis-based trucking company Celadon Group Inc. of engineering a sweeping accounting fraud that hid losses in the tens of millions of dollars, and they announced a felony charge against one of the company’s former executives.

But if the fraud was so sweeping, why did prosecutors charge just one person—Danny Williams, the president of Celadon’s truck-leasing subsidiary, Quality Cos.—and spare other former top executives (at least so far)?

U.S. Attorney Josh Minkler declined to comment on any aspect of the case. But the Justice Department’s April 25 press release—which announced Celadon had admitted to the fraud and agreed to pay $42 million in restitution—closes by noting that the investigation is ongoing.

And in that settlement with the company, prosecutors are crystal clear that they did not think Williams acted as a rogue executive.

“Multiple members of Celadon’s management … falsely represented” to the company’s outside auditor, the accounting firm, BKD LLP, the nature of the transactions that hid losses, the settlement said.

And in a plea agreement signed by Williams, prosecutors say that, after BKD began scrutinizing the fraudulent transactions, an unnamed Celadon executive instructed Williams to delete certain incriminating emails.

The criminal case revolves around Quality Cos., a Celadon subsidiary that owned trucks and leased them to drivers. Celadon grew the division at a torrid rate from 2013 to 2016, with its tractor fleet swelling from 750 to more than 11,000.

That year, Quality began to struggle because of a slowdown in the trucking market. Another problem was that it owned a significant quantity of a model of truck known to have major mechanical problems, making it unappealing to lease.

By 2016, many of Quality’s trucks were idle, unleased and overvalued on company books by tens of millions of dollars, according to prosecutors.

They charge that, instead of owning up to the fact that Quality was stuck with more than $70 million in trucks it was unable to lease, it engaged in four truck-swap transactions with an Indianapolis truck dealer that masked the losses.

The dealer is not identified in court records, beyond stating that it is headquartered in Iowa. However, the description matches up with Stoops Freightliner, part of Iowa-based Truck Country.

The invoices the parties created overstated the trade-in value for the 900 trucks Celadon disposed of—wiping out the need for Celadon to record a loss. The dealer then tacked on the amount of that overstatement to the price of the 650 newer used trucks Celadon bought, according to prosecutors.

BKD’s scrutiny of the transaction intensified after a December 2016 post by investor Jay Yoon on the website Seeking Alpha questioned the propriety of the trades. Yoon asserted that he’d been tipped off to the transactions, which he said were with Stoops, and that he’d filed a whistleblower complaint with the Securities and Exchange Commission.

In an attempt to put those questions to rest, in February 2017 CEO Paul Will and Chief Financial Officer Bobby Peavler signed a letter to BKD stating that, “The … sales and purchases transactions were conducted at arm’s length and the prices at which the company bought and sold vehicles reflect fair market values at the time of the transactions.

“Each transaction was [discrete] in nature, and none were interdependent. There were no undisclosed side agreements related to these transactions.”

That same month, the Public Company Accounting Oversight Board, which scrutinizes financials to ensure investors’ interests are protected, requested documents related to the truck trades.

In connection with that inquiry, BKD held a series of meetings with Celadon brass, including one on April 5, 2017, attended by Will, Peavler, Williams and President Eric Meek.

At that meeting, the executives falsely represented that the transactions were legitimate, according to prosecutors.

Even so, BKD lost faith. On April 25, it notified Celadon that investors no longer should rely on the company’s financial statements for the fiscal year that ended in June 2016 or the following two quarters.

Mike Wolfe, BKD’s chief risk officer, declined to comment on disclosures in court records, saying in an email that the firm believes “the DOJ’s allegations speak for themselves.”

All the senior executives identified by prosecutors are no longer with Celadon.

Will, who on LinkedIn calls himself a transportation and logistics consultant, and Peavler, who describes himself as an experienced financial professional, did not respond to requests for comment.

Until recently, Meek was CEO and Williams was chief operating officer of Freightrover, an Indianapolis-based logistics software business Meek bought from Celadon after leaving the company in 2017.

The names of Meek and Williams have been removed from the leadership team page of the Freightrover website. Asked to clarify their status, Freightrover President Scott Prince declined to comment.

Greg McCoy, CEO of the Truck Country dealerships, said in a statement: "Stoops has cooperated fully in the government’s investigation, and will continue to cooperate with the appropriate agencies.”•