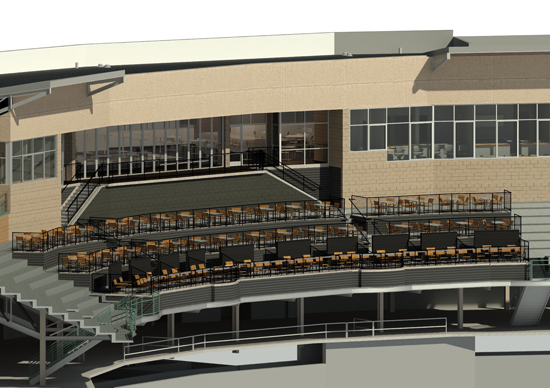 Plans for $8.3 million in upgrades to Victory Field are moving forward after getting approval from the city board that owns the stadium.

The Capital Improvement Board approved more than $6.5 million in contracts for changes to the 23-year-old baseball stadium that's home to the Indianapolis Indians. The upgrades include an expansion of the Indians' administrative offices and the creation of a 4,500-square-foot Home Plate Club, which will replace four suites behind home plate. The club will also require the relocation of the stadium's press box and radio and control rooms.

The indoor-outdoor club is expected to include amenities like beverage rails, televisions, movable seating, and a full bar, along with outdoor seating on three levels, giving more than 200 fans per game a more social viewing experience than what’s generally offered with traditional seats. (See below for a rendering of the interior.)

Charlie Henry, a spokesperson for the Indians, said the club will provide “not only the best vantage point to watch baseball, but arguably the best view of downtown Indianapolis.” 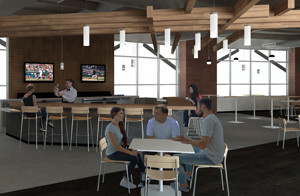 The project will also add about 3,000 square feet of office space for the Indians’ front office operations, which has more than doubled since the team moved to Victory Field in 1996.

The Indians are paying for most of the renovation—about $6.3 million—while the CIB is kicking in $2 million to complete its commitments from a 2015 lease extension, which included $6 million in improvements to Victory Field over four years. IBJ first reported the Home Plate Club plans in April, but at the time the cost had not been finalized.

The first two phases of improvements spelled out in the 2015 lease extension included an upgraded audio system and new video boards before the 2017 season and extensive improvements to the suite level before last season.

The Indians themselves have invested an estimated $6 million in the venue since it opened. That investment has funded Wi-Fi upgrades, new terraces, a restaurant and other improvements. The team and CIB split the $18 million it cost to build the stadium.

The CIB approved 11 contracts related to the project during its monthly board meeting last week:

—Geiger & Peters Inc., Indianapolis, more than $1.4 million for structural and other steel;

Contracts totaling about $1.8 million for the general contractor, Hunt Construction Group, and architect, Browning Day Mullins Dierdorf, were approved in 2018.

The project will begin in September, after the Indians’ 2019 season concludes. The expected completion for the renovation is spring 2020, before the team’s home opener.