By reviving a 106-year-old building to accommodate small-business owners, apartment dwellers and working artists, siblings Phil and Joel Kirk want to be part of the commercial comeback of the Garfield Park neighborhood southwest of Fountain Square.

Abandoned storefronts are common along the neighborhood’s Shelby Street corridor, including more than one empty spot on the first floor of the 10,000-square-foot building purchased last year by the Kirk brothers.

Elsewhere on Shelby Street, positive momentum is evident. David O’Rourke, who recently completed his term as president of Garfield Park Neighbors Association, pointed to Garfield Brewery, which opened in 2018, and Helm Coffee Co., open since September, as difference makers.

“It’s been incredible how much life has been brought back to Shelby Street,” O’Rourke said. “I think [the building being rehabbed by the Kirks] would further the progress that’s already happened around there.”

The Kirks’ building, at 2602 Shelby St., occupies an important place in Garfield Park’s history and geography.

Charles Yoke built the mixed-use structure in 1916 near the corner of Shelby and Southern Avenue, across from the park that gave the neighborhood its name. His grandfather Allen Yoke was an early Indianapolis resident who purchased a 160-acre farm in 1842. Twenty-five acres of Yoke’s farm became the southern end of the 128-acre Garfield Park in 1913.

The Shelby Street building has been renamed Yoke Pavilion by Phil Kirk, lead at Kirk Realty Team, and Joel Kirk, CEO and founder of Discovering Broadway Inc. The next chapter in the building begins this month when the Serendipity Plants shop is scheduled to open on the first floor.

Level, a combination cafe and coworking space, is planned for about half of Yoke Pavilion’s first floor, opening next spring. Kirk Realty Team will establish its headquarters in one of the storefronts, and the Garfield Park Barber Shop—which opened in the Yoke building in 2009—will continue to serve customers at its original location.

“As much as people love the park, until recently this corridor has lacked some development and opportunities for small businesses to keep people here when they visit the park,” he said.

In 2017, Big Car began acquiring vacant houses along Cruft Street and Nelson Avenue, renovating the buildings for affordable housing for artists and others engaged in creative occupations. More than a dozen dwelling spaces are now part of Big Car’s Affordable Artist Housing Program.

Phil Kirk credits Big Car with launching a transformation in the area.

“We’re taking cues from them on what they’ve been able to accomplish,” Kirk said. “We hope to further enrich the Garfield Park neighborhood.”

Beyond first-floor storefronts and second-floor apartments, Yoke Pavilion will feature a courtyard between the building and next-door neighbor The Umbrella Center, an autism services company that opened this year in the former Garfield Park Baptist Church location.

The courtyard, which Kirk said will resemble an overgrown secret garden, will be accented by a wall mural.

In the basement of Yoke Pavilion, the brothers want to open an art gallery in one room and a small-scale performance venue for musicians and comedians in a second room.

They envision First Friday foot traffic in which visitors stop by Level, pause in the courtyard, check out art and entertainment in the basement, then head to events at Listen Hear and Tube Factory.

“Hopefully, we can create some cross-pollination,” Kirk said.

The leases for Serendipity Plants and Garfield Park Barber Shop are “on the low end” of what businesses pay for commercial spaces in Indianapolis, he said. “The goal is to try to maintain attainability and affordability for small businesses that are emerging from [within] Garfield Park.”

O’Rourke, the former Garfield Park Neighbors Association president, said that’s a smart approach in an area known for a reasonable cost of living.

“I think we have a good community of people who are pretty active and use the park but also bike and use the bus to get to work,” he said. “These are people who want to be near downtown but are still looking for affordable housing. I would hate to see [Yoke Pavilion] be something that was unattainable for people who already live there.”

Niche.com, a ranking and review website for schools and neighborhoods, lists Garfield Park as a neighborhood of 5,020 residents and median household income of $47,641. It lists the median home value at $101,263, although the houses closest to the park have been selling for significantly more.

Niche lists nearby Fountain Square as a neighborhood of 5,506 residents and a median household income of $56,984. It says the median home price in Fountain Square is $182,750, although prices are higher near the heart of the commercial district.

The Kirks paid $390,000 for Yoke Pavilion last spring. Depending on the amount of investment needed to prepare the basement spaces, they estimate another $500,000 will be spent on rehabilitating the building. To date, plumbing, gas lines and electric wiring have been overhauled.

In his work as a real estate agent, Phil Kirk renovates houses that have fallen into disrepair and sells them. He said the practice of flipping houses has its positives and negatives.

“You can’t deny the fact that a lot of what we’re involved in can result in the displacement of people,” he said.

At the same time, Kirk said, he relishes opportunities to assist first-time homeowners.

“I love Indianapolis neighborhoods,” he said. “I love the idea of giving someone a pathway to what I think is one of the greatest wealth-building tools for them.”

“It’s a lot harder, but there are pathways to profitability through attainable housing,” he said. “We obviously leave money on the table that we could otherwise capture if we were doing half-a-million-dollar flips. But at the end of the day, the reward is worth it for me.”

The idea to pursue a commercial building such as Yoke Pavilion originated with Kirk’s interest in having an enduring, larger-scale impact on a neighborhood. 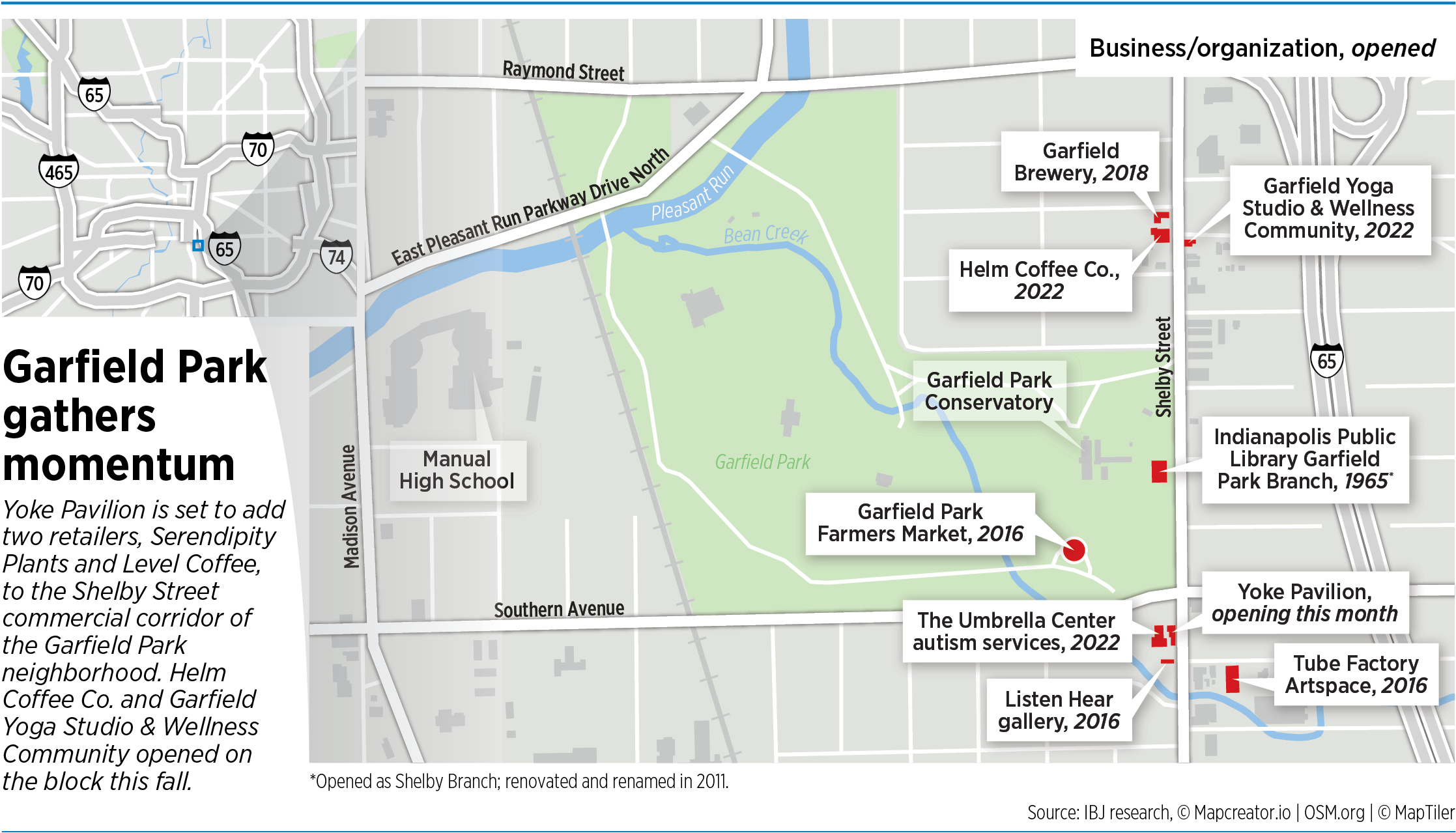 She specializes in hoyas, a tropical plant in the dogbane family.

“I’m going to focus on the rare, hard-to-find houseplants,” Thompson said. “We’ll have some commons in there, too, and some small plant-related gift items.”

Echoing the philosophies of the Kirk brothers and Big Car Collaborative, northwestern Indiana native Thompson said she’s interested in hosting community-based programs such as re-potting classes at her shop.

“I love the park, I love the community,” said Thompson, who’s lived in Fountain Square for about a decade. “I really wanted to be more involved in the community and find my place.”

Barbershop owner Mae Quintana is planning a trip to her home country of South Korea this month, during which the Kirks will spruce up her place of business with new paint and flooring.

The brothers said the complimentary improvements are a way of thanking Quintana for years of being a tenant in the building.

Quintana said she’s impressed by what “Pastor Tim” is accomplishing as part of the team rehabbing Yoke Pavilion.

“Their father, Tim, is an unbelievable man,” Quintana said. “He works early in the morning until late at night, every day. Where does he get this energy?”

“It was pretty run-down, and it got worse as time went on,” said Quintana, who’s cut hair at her shop for 13 years.

Quintana said she stayed because her rent never increased, and the prospect of moving her business was unrealistic.

Level, the future cafe and coworking space, will replace Able Rentals at Yoke Pavilion. Phil Kirk will be a co-owner of Level with Billy Ratthahao, a member of the Kirk Realty Team.

Kirk, who earned a theater-directing degree from Ball State University, oversees a production company in New York City. With Discovering Broadway, a not-for-profit launched in 2019, he brings creative teams and cast members to central Indiana to work on musicals that aim for a shot on Broadway.

“All it takes to make a show is space, your team and time,” Kirk said of incubating productions in the Midwest rather than on the East Coast. “In New York, I see people working in rooms all the time. Those are just people in rooms, and the rooms and people can be anywhere.”

The apartments at Yoke Pavilion, he said, can serve as short-term lodging for writers, actors and choreographers.

In 2021, a musical adaptation of “The Devil Wears Prada’ was fine-tuned at Carmel’s Hotel Carmichael as part of Discovering Broadway. The show, featuring music by Elton John, was presented in previews this summer in Chicago.

Kirk is working on a musical adaptation of “Hamlet.” And Discovering Broadway helped to facilitate “Five Points”—a Civil War-era story focused on Black and Irish cultures in Manhattan.

On Feb. 10, music from “Five Points” will premiere during a concert at the Madam Walker Legacy Center.

“Discovering Broadway is this crossroads of New York community and Indianapolis community and how special it is when you put people in the room together and they’re sharing something intimate and cultural,” Kirk said.

When Discovering Broadway visitors aren’t staying in Yoke Pavilion’s apartments, Kirk said, artists in residence could be musicians and comedians working on material to present in the basement venue.

The Kirks had to remove “five feet of garbage” in the basement, so the art gallery and performance spot might not be ready for the building’s official opening next spring.

“Unlike theater, where you feel the changes that are made to a show in development, you see the changes made to a building,” Joel Kirk said.•