Home » All my takeout has delivered a mountain of trash. So I asked experts how to minimize it. 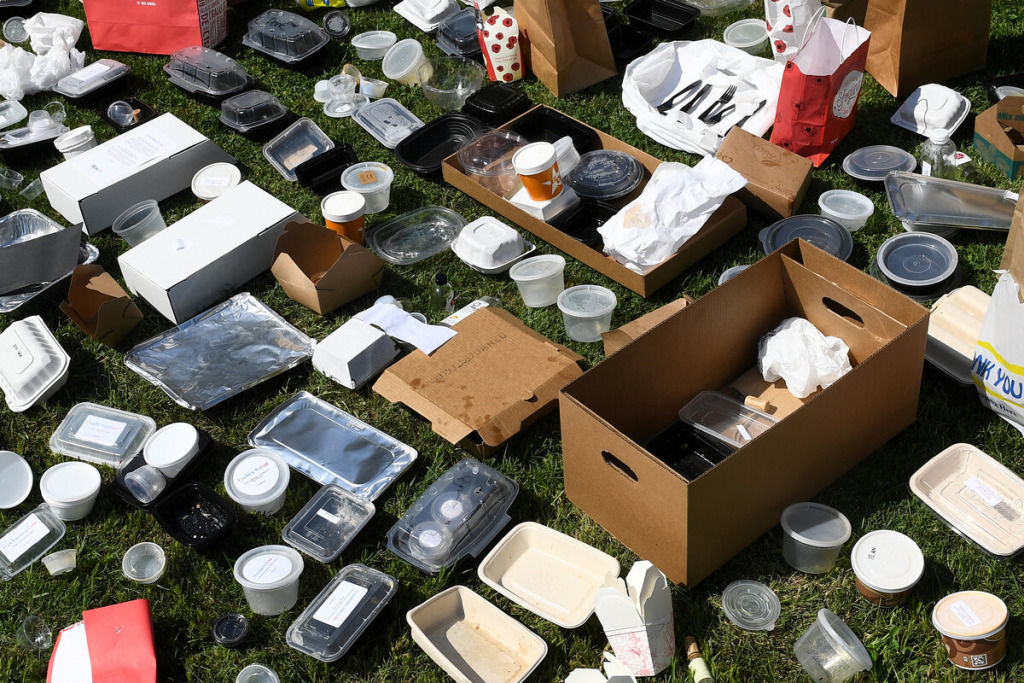 Until March, I could count on one hand the number of times I ordered takeout or delivery this year. Food critics tend to eat away from home a lot—in my case, 10 or so meals a week, give or take a salad night off.

What a difference a pandemic makes. Since March, I’ve ordered more takeout than Anthony Fauci has corrected official statements. Want to see my trash?

For three weeks this summer, I saved every scrap of takeout packaging, including the tiny containers of chutney from Vegz and the yard-long cardboard box holding two nights’ worth of dinners from Rose’s at Home. The stream of paper, plastic, aluminum and glass that came through my door from roughly 30 orders shocked and depressed me. I accumulated enough waste to fill two recycling containers—nearly 100 gallons of space—not to mention a torrent of guilt.

My fellow Americans, my problem is our problem. National Geographic last year spelled it out alarming terms: The United States uses more than 36 billion disposable utensils a year. Laid end to end, they could wrap around the globe 139 times.

Blame the global health crisis for our Godzilla-size appetite for takeout. Few of us are equipped or inclined to cook three meals a day for ourselves, and takeout and delivery have come to our rescue on a colossal scale. Market research company NPD Group reports that for the second quarter, covering the full impact of shelter-in-place and mandated dine-in closures, digital orders spiked by 127% compared with the same time last year. Grubhub, one of many players in the delivery game, ended its second quarter with 27.5 million active diners, up 35% year over year.

The cups from cold-brew breaks and the cartons from sushi and burrito runs that used to be tossed out at the office and forgotten about are now our responsibility, up close and personal—in our faces. The problem is literally knocking at our door. We have to answer it.

“Disposable is convenient” but inefficient and “ripe for disruption,” says Matt Prindiville, CEO of Upstream, a not-for-profit organization dedicated to closing the chapter on our single-use culture. The inexpensive cost of disposable utensils is “cheap not to whales and sea lions,” he says, referring to plastic and other materials that have hurt ocean life.

Because most plastic isn’t biodegradable, it sticks around. “Almost 80% of plastic ever produced is entombed in landfills, strewn across the world’s landscapes or drifting in the seas,” Bloomberg reported in March. The same story said that China, a major importer of used plastic until two years ago, stopping taking it, partly because much of it was contaminated.

Consider this a call to ditch plastic utensils and use your own cutlery when you get takeout.

Restaurants account for 78% of all disposable packaging, including an estimated 282 billion napkins, says David Henkes, senior principal at Technomic, a market research firm. “But once it leaves the restaurant, the operator has lost control of it.”

About three-quarters of consumers say they’re concerned about the environmental impact of packaging, although the number dropped slightly during the pandemic, according to Technomic. “Health and safety trump everything” right now, Henkes says. During a recent visit to a fast-food establishment, he was bothered but not surprised when the cup, straw and lid for his order came in their own bag. To show they’re safe, “restaurants overcompensate.” Given that “takeout and off-premises business is here to stay,” for fast-food providers and Michelin-starred dining operations alike, he sees opportunity for restaurants to radically rethink their packaging.

Sylvia Casares, the owner of Sylvia’s Enchilada Kitchen in Houston, switched from styrofoam to recyclable polypropylene containers this spring. The new packaging has separate compartments for the beans and rice and tight lids for clean transportation. Casares pays a dollar a carton—twice what she did before—but says the extra cost is worth it. “I want the experience to be as close to what it is in the restaurant,” the chef says. “Food that’s cooled off or has spilled doesn’t reflect that.” At home, she’s a collector of containers. “If you can get two or more uses, great,” she says. To that end, she has considered asking customers to return containers from her two restaurants for reuse.

Darby Hoover is nodding her approval in San Francisco. “It’s a pipe dream of mine, to return containers” to restaurants from which she orders consistently, says the senior resource specialist at the Natural Resources Defense Council. She’s in a good place to see that happen. Upstream Solutions is already working with a company in the Bay Area, Dishcraft, to ramp up the sanitization and delivery of eco-friendly, reusable dishware.

Regardless of where consumers live, there’s plenty we can do to cut back on food packaging waste, starting with a Just Say No campaign reimagined for 2020 and beyond. “Do you need napkins, utensils, condiments?” asks Hoover, who appreciates restaurants whose online ordering forms give customers the option to decline the extras. “Do you need a bag?” she says. You might not have a choice, but a single bag is probably sufficient. “Modest measures add up.”

The goal is to use the fewest resources possible. By ordering, say, several meals that might cover a few days, perhaps with a group of like-minded eaters, “each trip is maximized” to use less energy, says Hoover, who also repurposes restaurant containers at home. She encourages consumers to ask restaurants whether their packaging is recyclable or compostable. “Let them know you want the option.”

The best choices rely on the fewest chemicals, such as fluorine, that might leach into your food or the environment after they’re used.

“Reuse always wins for the environment,” says Prindiville of Upstream. Last month, Rose’s at Home in Washington switched from using cardboard boxes to insulated nylon bags. A note with the food delivery asks customers to reuse or recycle that and other packaging. One of the smartest ideas I’ve encountered during seven months of takeout is the metal pan used to convey paella from Jaleo, also in the District. I’m keeping the implement, but I’d get $10 off my next meal at the Spanish restaurant if I were to return it.

Cheers for restaurants that have the greater good in mind when it comes to packaging. D.C. chef Rob Rubba says the pandemic that pushed back the launch of his mostly plant-based new restaurant, Oyster Oyster, also gave him time to locate packaging that conformed to the business’s green philosophy. “Our ethos: We don’t even use plastic wrap in the kitchen,” says Rubba, who stores items like cheese in paper that’s not coated in plastic or oil.

He’s all about small carbon food prints. Relatively easy to recycle, glass was selected for the mignonette accompanying takeout oysters. Rubba hopes the 5-ounce jars are attractive enough for people to reuse at home. The chef was excited to find compostable food packaging made from sugar cane, until he discovered it was produced in China. Subsequently, Rubba sourced similar containers made in the United States. “I’m paying a little more,” he says, but “we’re building that into the cost of the dish.”

The containers aren’t perfect, nor are they designed for everything he makes. “Soups are tricky,” he says. Piping hot liquid tends to warp the sugar cane container.

On the bright side, says the chef, “It’s a reminder it will cycle back into life, whereas plastic will be there forever.”

My conscience, and recycling crews, thank him.

Tom Sietsema is a food critic for The Washington Post.