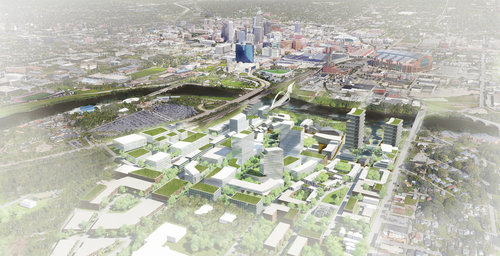 Local developer Ambrose Property Group has leveled new allegations against the city of Indianapolis in a lawsuit it filed Tuesday in the ongoing fight over the company’s decision not to develop the former GM stamping plant site on the western edge of downtown.

The company said in its 28-page complaint that Mayor Joe Hogsett’s administration had threatened to take the site through eminent domain in 2017—for a campus for tech giant Infosys—two years before its latest threat to use the legal maneuver to buy the land.

Ambrose said the previous dispute, which the company said ended when Infosys took a site at the Indianapolis International Airport, led it to add a clause in its project agreement with the city meant to prohibit the Hogsett administration from pursuing eminent domain in the future.

But now the city is threatening to take the property through eminent domain again—and the lawsuit alleges it could be part of an effort to provide space for Indy Eleven’s proposed soccer stadium development. An Indy Eleven spokesman told IBJ the site is not under consideration.

The suit, filed against the city and Department of Metropolitan Development in Marion Superior Court, also repeats previous allegations that the city’s eminent domain threat has cost Ambrose—which is now trying to sell 91 acres of stamping plant land—millions of dollars and set back its sale of the property.

“We are disappointed it has come to this, but the city’s illegal threats and actions have left us with no option but to protect our rights through a lawsuit,” Ambrose said in a written statement.

Ambrose also filed a petition requesting a preliminary injunction to stop the city’s efforts to take the land through eminent domain. That petition included additional details about the dispute.

But city officials say they have tried to negotiate a better outcome but that Ambrose walked away from the talks.

“The city’s stance has been clear and unwavering: If Ambrose is unwilling or unable to develop this important piece of property, the city should have a role in ensuring that what comes next is in keeping with the needs and ambitions of the surrounding neighborhood,” Taylor Schaffer, a deputy chief of staff in the Mayor’s Office.

She added that, “While we are prepared to correct the facts surrounding this matter, and defend the city’s rights under the law, our main goal continues to be pursuing an outcome that is in the best interests of our near-Westside residents.”

The city has not actually filed a lawsuit seeking to take the Ambrose property by eminent domain—although it has taken some initial steps—and the city’s chief corporation counsel, Donnie Morgan, did not indicate Tuesday whether the city plans to do so.

The Ambrose lawsuit is likely to deepen the rift with the city that began in September, when Ambrose announced it would not pursue a $1.4 billion development at the stamping plant, which it had named Waterside. The company initially said it was refocusing on e-commerce and industrial projects and away from mixed-use developments. Later, it said the move was spurred by the city’s decision not to award additional incentives to the Waterside project, which Ambrose had expanded.

Throughout its filing, Ambrose maintained the city acted inappropriately in asserting it could use eminent domain to take control of the land—in part because of the language in the February 2018 project agreement that explicitly states the city could not take the land by force. Ambrose said the threat was a violation of the Indiana Constitution.

But Indiana law recognizes eminent domain as a sovereign right, giving the city extensive latitude in such cases.

The company’s litigation comes four weeks after the company filed a tort claim notice  (a precursor to lawsuits) against the city, in which it made allegations of fraud and slander—though neither of those claims are in the actual lawsuit.

“Unfortunately, Waterside will remain a vacant, unused lot until this Court confirms that the City’s plan to take Waterside is unlawful and violates the City’s contract with Ambrose and that Ambrose (or another developer) is therefore free to move forward with bringing Waterside to life,” the lawsuit reads.

Ambrose alleges in the suit that the city had tried to take over part of the stamping plant site in 2017, when Infosys expressed interest in building its expansive new campus on the property.

Ambrose said the city threatened to take at least half the land through eminent domain—after the company rejected the city’s offer of $36.75 million for about 55 acres, citing neighbors’ concerns over the Infosys project.

“The City … intended to cut Ambrose out of any deal with Infosys,” the lawsuit alleges. “The City intended for Browning Investments to handle development of the campus and did not want Ambrose to have any role” in the project.

The suit indicates the city ultimately backed off, after RACER Trust—the entity that sold the land to Ambrose after an extensive bid process that involved the city—and other entities put pressure on local officials to find a different site for the development. Infosys ultimately settled on the airport site, where construction is now under way.

Ambrose said it asked for the provision forbidding eminent domain because of the Infosys situation.

“That provision was in the contract because the City had previously threatened to take the property, and we needed assurance the City would not try to take it again,” the company’s statement said. “Accordingly, the contract protected us from the City trying to take the land.  Based on that promise, we invested millions in the redevelopment of the property.”

The company said it also learned through a public records request that the city is in negotiations with the Indy Eleven to take over the stamping plant site, though it is not indicated in those records that the specific site being discussed is the stamping plant property.

IBJ has also requested documents related to those discussions, but has not received the information.

Indy Eleven earlier this year announced it planned to build a 20,000 seat soccer stadium as part of a $550 million mixed-use project known as Eleven Park.

The franchise has not yet said where that development is expected to go, though several sites around Indianapolis are thought to be under consideration.

Ambrose owner Aasif Bade said in the injunction filing that he was told by Indy Eleven owner Ersal Ozdemir that the franchise “had been approached by government officials about Indy Eleven using Waterside.”

The city met with team officials Nov. 12 at the City-County Building to discuss the project, according to records included in the lawsuit.

In a statement, an Indy Eleven spokesman said, “Indy Eleven has been approached about countless sites around Marion County, but we are not in any negotiations with the city whatsoever about the GM site, nor is it under any consideration.”

Jay Napoleon, president of The Valley Neighborhood Association, in which the stamping plant site is located, said he is disappointed, but not surprised that the fight between the city and Ambrose has escalated to a lawsuit. He added he remains hopeful the parties will be able to reach a solution out-of-court.

But Napoleon also said he has concerns over rumors and speculation the Indy Eleven’s stadium may be located at the site, since the Valley neighborhood has not been engaged discussions about that possibility.

“For us that would be a giant red flag,” Napolean said. “That’s not something that could just be sprung upon us that we would support without some conversation.”

Ambrose has continued to push back against the city’s interest in acquiring the site, which came to a head when Ambrose officials said the city offered $6 million for the property.

The company said in the suit that a recent appraisal of the property valued the land “at a conservative $50 million.” But the company has declined to release the appraisal or provide other documents backing up that valuation.

The company said the figure is based solely on the property’s value as-is, not including other outside factors like the agreement with the city, which is worth at least $26.8 million in public infrastructure funding and could be transferred to a new owner.

Ambrose has previously stated it believes the land has fair-market value ranging from $65 million to $100 million, although it has not been willing to provide documentation proving those figures, either.

In late October, the city met with Ambrose officials at the company’s Monument Circle office and floated $6 million for the property, which Ambrose said it rejected.

The company said it has “lost millions in investments that it had secured for the development of Waterside, as well as the millions it would have earned managing those investments,” though the company has not shared specifically how much it has spent to-date on site work or other costs associated with the stalled out project.

Ambrose said any progress on the development has stopped amid confusion and the contentious dispute between the company and city officials.

“The city’s unlawful threats have thus frozen all activity at the site because no developer will invest in the property until the city’s threats are removed,” the statement said, in part. “The sooner this dispute is resolved, the sooner our community can begin to reap the benefits of the property’s development. We look forward to a resolution of this matter.”