Home » Apartments added to hotel proposal on south side of downtown 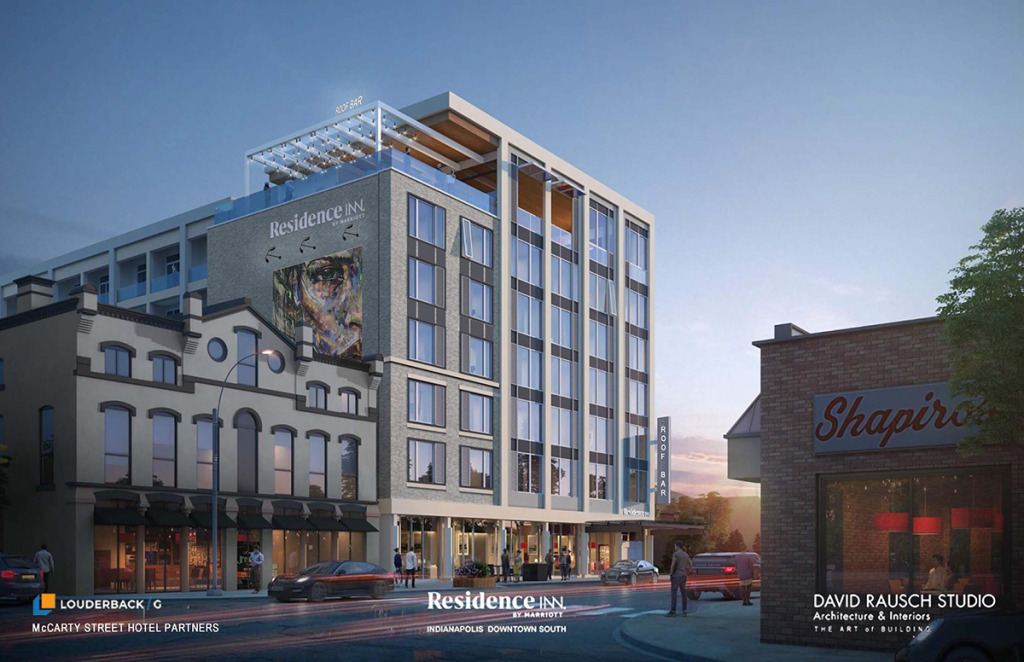 The hotel project also will include about 60 apartments on its upper floors. (Image courtesy of David Rausch Studio)

The development team behind a hotel planned for a parcel across from Shapiro’s Delicatessen in downtown Indianapolis is adding apartments to the mix.

Deli owner Brian Shapiro and partners The Louderback Group and Dora Hospitality Group plan to include about 60 apartments in their seven-story project at the southeast corner of Meridian and Sycamore streets, which already included a 135-room Residence Inn hotel.

The group is set to present the changes to the now-$50 million project during the city’s Regional City Hearing Examiner on Thursday. The group last year told IBJ it would adopt the Marriott-owned Residence Inn flag, in a move away from its original concept—an InterContinental Hotels Group-branded Even Hotel that was announced in 2019.

At that time, it also shared plans for a rooftop bar space featuring locally sourced graffiti artwork and a menu from Indianapolis restaurateur Steve Oakley. The plans, which still include Oakley’s involvement, now also call for a restaurant that would be able to seat about 140 people.

Shapiro said the decision to add apartments stems from a desire to increase density on the property. Most units would be what he called “micro-apartments”—studios—on the sixth and seventh floors, but the mix would also include a few one- and two-bedroom units.

“As we saw rising costs, we said, we need to maximize the amount of density on this property,” Shapiro said. The group opted for apartments rather than more hotel rooms because “the property is walking distance to Eli Lilly and other amenities. … We think the future is extremely strong on the south side.”

Initially the project had been expected to cost $25 million, but that figure inflated to $35 million with its new flag and bar addition last year. Shapiro said inflation and construction prices, along with a new seventh floor, are driving the costs even higher.

The project will require city approvals for a rezoning of the property to allow for apartments, with final approval potentially coming sometime in June. Construction would begin by this fall, with an opening by summer 2024.

David Rausch & Associates is the architectural firm on the development.