Home » More students return to college, but not as many as the state hoped 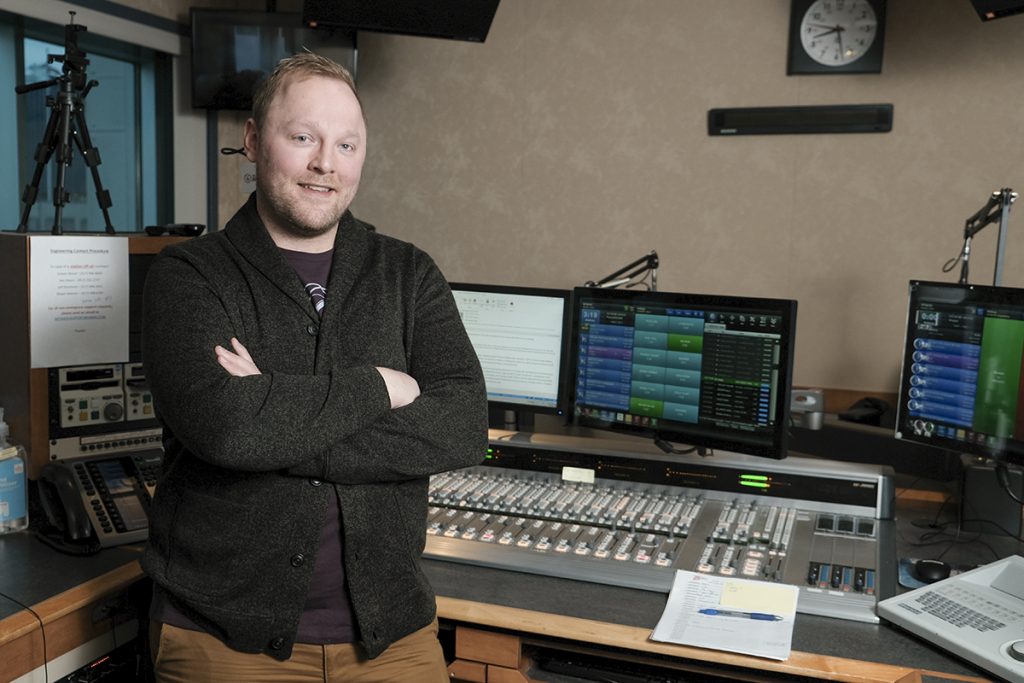 Sean Copeland went back to school in 2016, after leaving earlier to take a full-time gig. (IBJ photo/Eric Learned)

Sean Copeland was about two years into a bachelor’s degree when he was offered a full-time gig at a radio station.

He was studying education, and the salary he was offered to work as a radio personality was higher than what he’d get paid as a first-year teacher. So, he dropped out of school, opting to launch a radio career over earning a degree.

It worked out for him. Today, Copeland has been working in radio for more than a dozen years.

Still, he wanted to finish what he started. And having a Plan B—especially in media—can’t hurt.

About a decade after dropping out of college, Copeland went back to school in 2016. Instead of pursuing a degree in social studies education, he chose to study business management. He enrolled at Western Governors University Indiana and completed a four-year degree in 1-1/2 years. In 2018, after he finished his classes, he received a promotion.

Before going back, Copeland was among the roughly 750,000 adult Hoosiers who started a degree but never finished it, leaving school for a variety of reasons. And he’s a success story for the Indiana Commission for Higher Education, which in 2016 launched an initiative called “You Can. Go Back.”

The campaign aims to shore up the number of Hoosier adults with either a college degree or a high-quality training certificate. In 2015, the commission set a lofty goal for the campaign: It wanted to see 200,000 adults with some post-secondary education go back to school and earn a degree by 2020.

Today, more than 19,000 Hoosier adults have re-enrolled in some sort of post-secondary education. More than 11,000 of them have finished degrees.

And while that’s a far cry from state officials’ goal, they say they’re making progress, despite headwinds that often stand in the way of adults earning a degree. And they’re not taking their foot off the pedal.

“You Can. Go Back.” plays into a larger goal set by Indianapolis-based Lumina Foundation, which aims to ensure that at least 60% of adults nationwide hold a credential beyond high school by 2025. Indiana also adopted that goal and currently stands at about 43%. By helping 200,000 Hoosiers with some post-secondary education earn a degree or certificate, the state would reach that 60% mark.

Across the country, some 36 million Americans have some college credits but no degree, according to a 2019 report by the National Student Clearinghouse. That report found that over the past five years, 3.8 million people across the nation returned to college, and 940,000 of them have completed a degree. More than 1 million are still enrolled and taking classes.

Indiana ranks among the 15 states with the highest number of students currently enrolled that previously had some college credit but no degree. It falls behind neighbors Illinois, Ohio and Michigan but ahead of Kentucky.

Teresa Lubbers, Indiana’s higher education commissioner, told IBJ that many people have viewed the commission’s goal to re-enroll past attendees as low-hanging fruit. But she said getting adults to go back to school is hard.

Many of them have families and full-time jobs that make earning a degree difficult. They are certainly unlikely to enroll full-time at one of the state’s traditional four-year colleges. And even with online courses, finding the time to do the work can be difficult, she said.

Finances can stand in their way, as well as issues, such as poor grades or unpaid tuition, that may have led them to withdraw in the first place.

That’s why it’s important for colleges to make it easier for adult learners to earn a degree, she said.

Legislation passed in 2015 helped launch the initiative and required public universities to begin reaching out to former students who hadn’t graduated. The schools could handle that outreach on their own or hand it over to the commission. Many chose the latter option, Lubbers said.

So, in spring 2016, the commission launched a marketing strategy to reach students who had earned at least 25% of their credits before leaving school. They targeted students who had dropped out within the last decade, as they were deemed most likely to return.

The commission worked with the universities to find email or mail addresses for students and began reaching out via digital mail, post cards and even outdoor signage. That outreach delivered a simple message to former students: A lot has changed and so have you. You can go back.

Lubbers said the commission tried to individualize the messages to have the most profound impact. The marketing depicted single moms and men who had recently lost their jobs. Altogether, the commission sent out 270,000 targeted emails and 120,000 direct postcards.

It also offered $7.5 million in adult student grants to make returning to school more affordable. Students were eligible for $2,000 in grants, and the commission encouraged institutions to offer additional financial aid, such as tuition discounts.

The commission also encouraged schools to offer forgiveness for academic and financial holds that might prohibit a student from returning. For example, if students previously failed to meet satisfactory academic progress to stay in school, but it has been two years since they left, the commission recommends they be readmitted.

And the commission recommended schools do what they can to make returning possible, from offering online or flexible courses to extending the time staff are on campus to help students.

Schools have since launched programs targeting adult learners or beefed up programs that already existed. Ivy Tech Community College and Vincennes University, for example, work with the state as providers of the workforce ready grant, which pays for students to earn a certificate in a high-value industry.

Now called Purdue Global, the online school has awarded more than 700 credentials to Hoosiers since 2018. Those credentials run the gamut, from certificates to doctorate degrees.

Betty Vandenbosch, chancellor of Purdue Global, told IBJ that 91% of Hoosiers enrolled in Purdue Global had some post-secondary education coming in. And 63% of them are 30 or older.

“We really cater to people who got started, didn’t finish for some reason or another and came back,” she said. “We make sure that students first of all have an experience that fits adults.

“We also make sure that they get credits for everything they already know,” she said. “I think that’s really important because an adult doesn’t have time to relearn composition if they’ve already learned composition.”

Because students at Purdue Global get credit for courses they’ve already completed, many can finish a bachelor’s degree in less than two years, she said. And the courses are online, meaning students can work when their schedules allow.

“Our whole mission is to help our students get in, learn what they need to learn and move on to the career they deserve,” she said. “We have to reach those students where they are today and help them move forward in a way that’s practical given their current circumstances.”

Copeland, the morning host and program director at WYXB-FM 105.7, had a similar experience at WGU.

He was able to finish his bachelor’s degree in about 18 months. That’s because WGU allows students to take courses at their own pace, and they can take final exams early if they feel prepared.

Copeland finished a marketing class in a day and a half, for example. His managerial accounting class, however, took longer—eight weeks.

He said in many traditional university settings, it often feels like work experience and academia are at war, but at WGU they co-existed. “I can’t imagine anything being more flexible,” he told IBJ.

Now, Copeland is taking graduate classes at IUPUI to become a therapist, a degree he hopes to finish in August. He plans to continue to be a morning radio host in the morning and take therapy clients in the afternoon.

“It’s a great accomplishment,” Copeland said of finally finishing his bachelor’s degree and beginning his master’s. “Working in media and journalism, you know that industry is constantly changing. It’s good to have a plan B. It’s good to have a side hustle, if you will.”

Copeland’s story is exactly what the commission wants to see.

The legislation that created the initiative is set to sunset, although the commission plans to continue the program and lawmakers might extend it. Coming soon, the commission expects to launch new ways to reach former students and answer their questions and is working with a marketing company to bring more sophisticated digital tools online.

“We’re not stopping at 2025,” Lubbers told IBJ, saying that Hoosiers are going to need to continue to be skilled up to meet future job demands. Education is no longer something that’s completed at one time, she said. Instead, it’s turning into a lifelong process, where students can return for certificates, training and credentials.

“It’s safe to say the efforts that are underway now will be continuing.”•