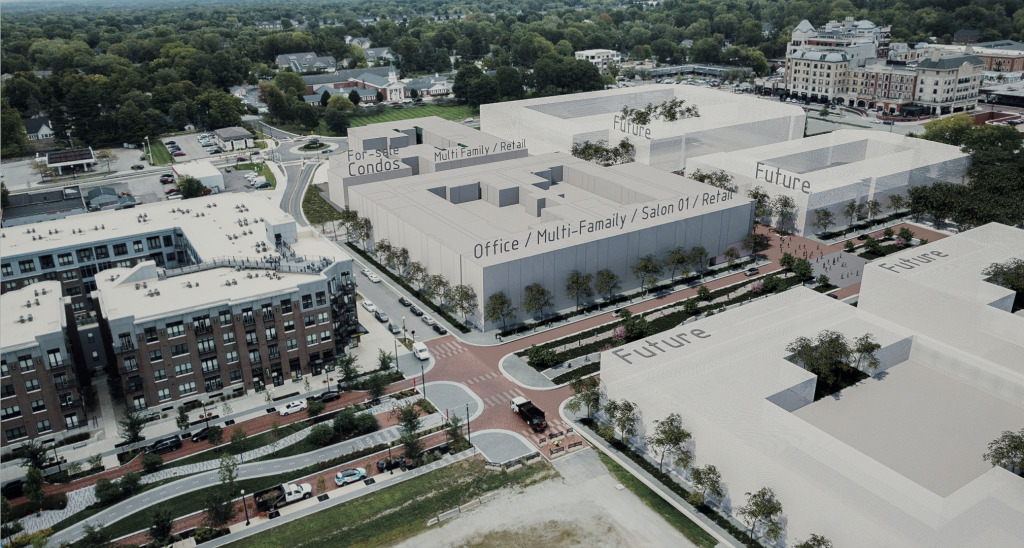 Carmel is planning to redevelop the site of the Monon Square Shopping Center. The project would include housing, office and retail space, restaurants, and parking garages. (Rendering courtesy of the city of Carmel)

Carmel announced plans on Monday for a $100 million first phase of redevelopment at the site of the former Monon Square Shopping Center.

“It’s the last piece of the puzzle,” he said.

A $70 million project on the northwest quadrant of the site would include 21,000 square feet of office and retail space. Salon 01, a hair salon and spa currently owned by Stirsman at 200 City Center Drive, would move to the development.

The northwest quadrant would also include 249 multifamily units and a 390-space public parking garage.

Plans also call for a $30 million northeast quadrant that would have 122 multifamily units, retail and restaurant space, for-sale condos, and a 79-space parking garage.

The project would also have a solar component. The city plans to develop the east and south areas of the site in the future.

The city consulted with urban planner Jeff Speck, who worked on the design for Midtown, to rebuild the street grid in the area from scratch, Mestetsky said.

The Carmel City Council will consider an ordinance on Monday night for about $18 million in developer-backed tax-increment-financing bonds.

The city purchased the Monon Square Shopping Center in 2018 for $15 million. The 8.7-acre property at 620 S. Rangeline Road had about 75,000 square feet of leasable space.

Tenants at Monon Square included Union Brewing Co., Ristorante Roma and Antique Emporium. The shopping center is set to be demolished early next month, and Mestetsky said Monon Square businesses have moved to other areas in Carmel’s downtown core.

Construction on Monon Square North is expected to begin sometime next year and last 18 to 24 months.

“We have worked to transition most businesses to new locations, and everyone has known about the coming demo since 2018,” Mestetsky said. “Tenants have been month-to-month.”