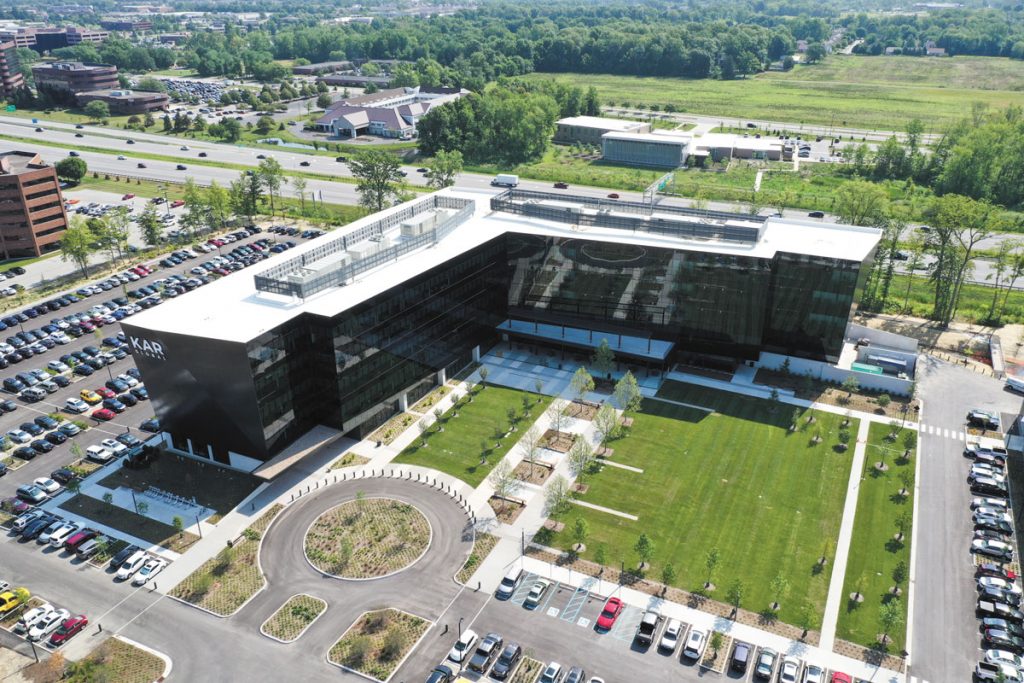 The deal includes all of ADESA’s auction sales, operations and staff at 56 ADESA logistics centers in the U.S.—including one in Plainfield—as well as the exclusive use of the ADESA.com marketplace in the U.S.

About 4,500 employees of ADESA and KAR would move to Carvana as part of the sale, which is expected to close in the second quarter. That’s just under 50% of the company’s total head count, CEO Peter Kelly said in a statement.

But the company did not say how many of the employees who would be moving to Carvana are based in Indiana. According to IBJ research, KAR has about 9,600 employees worldwide and 1,150 employees in Indiana.

KAR, which opened its headquarters at 11299 N Illinois St. in 2019, ranked 18th on IBJ’s list of Indiana public companies based on 2020 revenue. IBJ won’t publish a list based on 2021 revenue until later this year.

A KAR spokeswoman declined to answer questions about the acquisition and its impact on Indiana operations. KAR executives will host an analyst and investor call at 8:30 a.m. Friday where they intend to share more information, she said.

The company said it plans to use proceeds of the sale to reduce KAR’s corporate debt.

The move would be KAR’s latest—and largest—push to transform into a digital company, focusing on online wholesale used car auctions as well as dealer-to-dealer sales and digital dealer services.

In the past few years, the company has made significant acquisitions designed to boost its digital presence and the technology it uses to facilitate car sales.

Last fall, KAR completed a $450 million acquisition of Carwave Holdings LLC, a dealer-to-dealer digital auto auction company that does business primarily in the West. In September 2020, it announced a $425 million acquisition of BacklotCars Inc., a fast-growing Kansas City, Missouri-based firm that uses artificial intelligence and machine learning to provide dealers with personalized recommendations for purchases.

“KAR has always been a leader in the digital transformation of remarketing, and this transaction firmly positions us as the premier digital marketplace provider for wholesale used vehicles,” Kelly said. “While off-premise sales have increased over the past decade and represent over 50% of our vehicle sales today, we believe we are still in the early stages of this industry evolution, and the trends are rapidly gaining momentum.”

He called digital vehicle marketplaces “higher growth and higher margin.” And he said selling the ADESA unit will enable KAR to have a “leaner, more nimble operating model and faster long-term growth rate.”

The deal calls for KAR to serve as a technology partner to Carvana, supporting the ADESA.com digital marketplace and the Simulcast and Simulcast+ technology that KAR created for in-lane virtual sales.

KAR would continue to operate its Openlane platform that supports more than 40 private-label auction programs that represent approximately 80% of the sales of previously leased vehicles in North America.

KAR said it would also continue operating its growing digital dealer-to-dealer businesses—BacklotCars and Carwave in the U.S. and TradeRev in Canada, all of which experienced double-digit growth in 2021. In addition, the company said it would retain its ADESA Canada, ADESA U.K. and ADESA Europe businesses as well as its affiliated inspections, transportation and other services brands.

ADESA was founded in Indianapolis as Auto Dealers Exchange Services of America Corp. in 1992 by auto auction executive Mike Hockett and Gary Pedigo, president and co-owner of Indianapolis Auto Auction.

Jim Hallett joined the company in 1993 as president of ADESA Canada. He became CEO of ADESA in 1996 and led the company’s initial public offering in 2004.

Under Hallett, KAR completed the acquisition of more than 50 wholesale auctions and other businesses, expanding the company across North America and Europe and growing annual sales to nearly 6 million vehicles in 2018.

Hallett stepped down as CEO on April 1, 2021, and the KAR board promoted Kelly from the role of president to CEO. Kelly joined KAR in 2011 when the company acquired Openlane, which he cofounded and led as CEO.

On Wednesday, KAR reported better-than-expected fourth-quarter earnings and full-year results that were much better than the previous year’s.

Revenue for the used and salvaged vehicle auctioneer was $529.6 million, a year-over-year increase of 4%. That beat analyst forecasts of $521.7 million.

KAR said in news release that the transaction is expected to reduce the company’s 2022 earnings before interest, taxes, depreciation, and amortization by about $100 million on an annualized basis—after expenses related to the transaction have been accounted for.