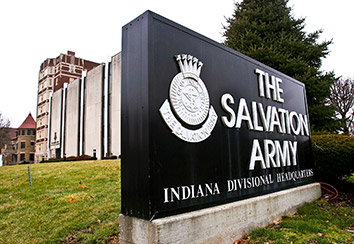 The Children’s Museum of Indianapolis on Tuesday said it plans to demolish a pair of neighboring structures along North Meridian Street—including a 91-year-old apartment building—as the museum looks to increase its parking and boost its programs.

But the city of Indianapolis said Wednesday the museum will need a zoning change to pursue those plans.

The Drake apartment building at 3060 N. Meridian St. and the former Indiana divisional headquarters of the Salvation Army at 3100 N. Meridian St. both will be torn down in coming months, the museum said. Both properties are expected to be turned into surface lots in the near term, as the museum decides how they will be used down the road.

“We know that this is going to be disappointing to a lot of our neighbors, but this is not something we decided to do quickly or lightly,” said Brian Statz, vice president of operations for the Children’s Museum.

He said planning for the properties will be focused on new programming for the museum, rather than creating permanent parking on the parcels—although he noted the parking in the short-term will provide “much-needed relief” to residents of the surrounding neighborhood and to visitors who often compete for parking spaces.

The Drake, built in 1928, and the former Whitestone apartment property—which was demolished in 2015—were purchased for $1 million each by the museum’s real estate arm, TRex Enterprises LLC, in October 2012.

The Drake was originally developed by Arthur Baynham and designed by local architect Henry Ziegler Dietz, who teamed up on several significant local apartment projects in the 1920s. The building is not protected by local, state or national laws that govern use of historic properties.

The Salvation Army building, constructed in 1960, was bought by the museum for around $2 million in June 2018, after the not-for-profit moved its operations to the north side.

The Children’s Museum vacated residents from the Drake building in 2016, after the firm that managed it withdrew due to its continued deterioration.

The museum determined that the building would need several million dollars in repairs, including a new electrical system, new plumbing, new windows and new elevators, along with exterior aesthetic and structural work.

The building would need to be fully gutted to make it inhabitable again. Statz said several good leads from Indianapolis-based preservation not-for-profit Indiana Landmarks on potential developers “didn’t pan out.”

The museum earlier this year sent out a request for proposals, asking for redevelopment ideas for the building, including the possibility it could be a hotel. It only received one response, the finances of which were not on solid footing, said Marsh Davis, president of Indiana Landmarks.

“Despite consulting with a number of different companies … we never found anybody who could do it without us risking millions of dollars with no reasonable expectation that we’d see that money back,” Statz said. “At that point, we decided it was a better use of our funds to put it into programs that will help our visitors and neighbors, rather than maintaining these buildings.”

The Children’s Museum has a dedicated annual fund of about $200,000 for the Drake and the Salvation Army properties, which is used to pay taxes, insurance, utilities and maintenance.

Davis of Indiana Landmarks said the group is “obviously disappointed” the Drake building could not be saved, but noted despite the best efforts of both Landmarks and the Indiana Children’s Museum, “it just didn’t happen.”

He also said an 11th-hour rush to save the property isn’t expected, nor is it necessarily warranted.

“You can save anything if the money is there,” Davis said. “In this case, the money just wasn’t there and there’s no economically viable alternative.”

The city said no demolition application has been filed for the properties.

“The first time we heard of the Children’s Museum plans was when the IBJ contacted us,” Emily Mack, director for the Department of Metropolitan Development, said Wednesday in a written statement. “Based on what the IBJ reported, the installation of surface parking will necessitate a zoning change, which would require a public hearing before the Metropolitan Development Commission. Both DMD staff and the MDC value transit-oriented development, which is a significant collaborative priority for the city of Indianapolis, Metropolitan Planning Organization, and IndyGo.”

The Children’s Museum owns all the property on the west side of Meridian between 30th and 32nd streets, including the Stutz house at the northernmost end of the stretch and the Schnull-Rauch House immediately north of the museum building.

Statz said the museum must go through “a long process” to determine what will replace the demolished buildings, including whether it will expand its 7.5-acre Riley Children’s Health Sports Legends Experience or add other experiential options.

“We’re not ruling anything out,” he said.

He said the museum hopes to add elements that would be beneficial for both the museum’s visitors and the neighborhoods nearest its operations. Those living in the six neighborhoods surrounding the museum will have free parking on the site until it is redeveloped by the museum for programming.

“For now, we have the ability to take the money that we were putting into these buildings and devote it  instead to programs that will benefit visitors and our neighbors,” Statz said. “I hope that is some consolation.”