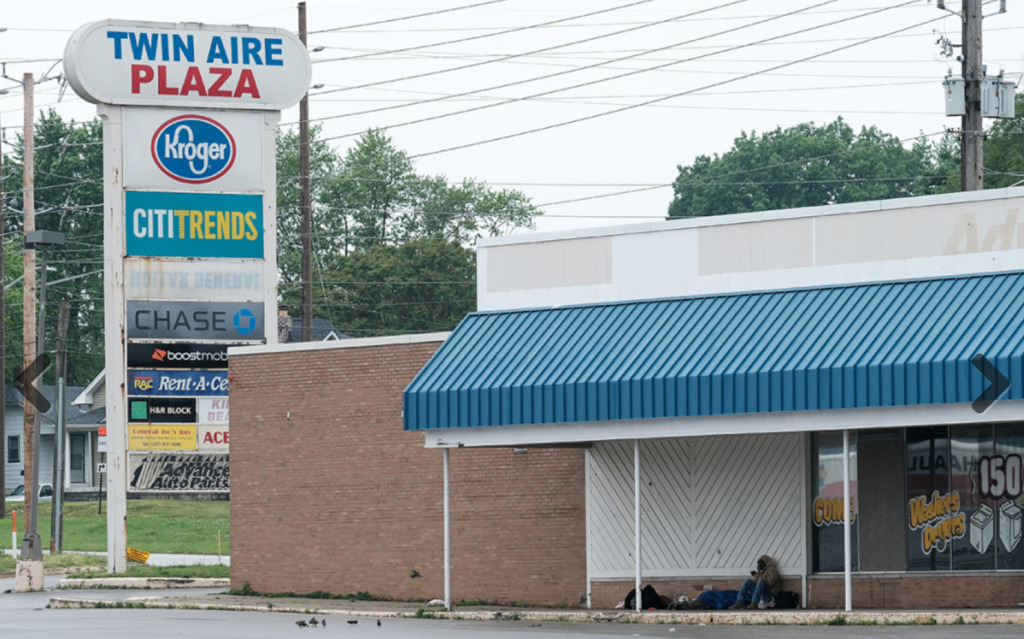 Most of the leases in the Twin Aire Shopping Plaza are set to expire by the end of 2024. (IBJ photo/Eric Learned)

Indianapolis officials are asking developers to offer ideas for the redevelopment of more than 40 acres near the Community Justice Campus southeast of downtown, as part of an ongoing effort to revitalize the Twin Aire neighborhood.

The Department of Metropolitan Development and the Health and Hospital Corporation of Marion County last Friday issued a request for information tied to the Twin Aire Drive-In and Twin Aire Shopping Plaza properties, which they respectively own. It’s the first concerted step in the city’s effort to redevelop the parcels as part of improvements to the area surrounding the CJC.

The shopping center, which is anchored by a Kroger grocery store and has been owned by the Health and Hospital Corp. since September 2021, occupies about 12.7 acres at the southwestern corner of East Pleasant Run Parkway North Drive and Southeastern Avenue.

The properties have long figured in the city’s plans to build on the momentum from the community justice campus.

“It was always our vision to put those two together as part of [the CJC] strategy,” said Scarlett Andrews, director of the Department of Metropolitan Development. “Now that the Community Justice Campus is open and operational, this seems like a great opportunity to now introduce what had always been in our plans, in terms of a neighborhood redevelopment strategy.”

Andrews said the request for information is likely to garner suggestions that include mixed-use developments, apartments, and community spaces, as well as facilities for not-for-profits.

The 16-page document identifies residential space—a mix of market-rate and affordable housing—as well as commercial space as possible uses, with an emphasis on expanding food access and dining. Those uses would be in line with community planning processes that have occurred in the Twin Aire neighborhood in recent years, Andrews said.

“They’ve outlined some of their high-level goals for the site, which includes green space, community space, maintaining the grocery store and … community-based retail. Maintaining that type of retail is important to the community,” she said. “We’ve also talked a lot about housing as a potential use for the site.”

The RFI asks respondents to offer information about what types of redevelopment can be supported by the site, as well as how the sites could be reconfigured to be integrated and connecting with the neighborhood. It also asks how the development can meet community priorities and whether market-rate development can support spaces for government, not-for-profit and community service organizations.

Paul Babcock, president and CEO of the Health and Hospital Corp., said he thinks it’s too soon to know what the long-term future of the shopping plaza might be, but said the owner is open to all options.

“That’s what we’re looking for from the RFI—to get those types of possibilities,” he said. “[We] want to send it out and see what kind of creative things people come back with. Obviously, we want to make sure we have anchor tenants to provide things that fit within our mission, such as Kroger.”

Kroger is the only long-term leaseholder in the shopping center—it’s been there since 1982—occupying about 35,000 square feet. Its current term expires on Jan. 31, 2024, although the grocer has two five-year renewal options that it may exercise, as well as an additional 15-year term. Exercising those terms could extend its lease through January 2049.

As part of the ground lease on the property, the landowner isn’t permitted to modify the Twin Aire Shopping Plaza property—such as adding or demolishing buildings—without Kroger’s approval.

The remainder of the leases on the property are expected to expire by the end of 2024. Those include Cititrends clothing, General Tso’s Inn Chinese restaurant, Ace Hardware, Rent-A-Center, Boost Mobile, Happy’s Tire Shop, H&R Block, Chase Bank and Kings Beauty.

The RFI itself will not result in a development partnership, but rather determine the best potential uses for the property as part of a future request for proposals process. Responses to the RFI are due to the city by Nov. 11.