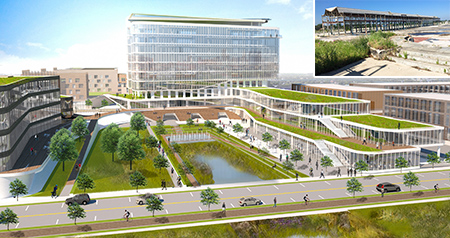 The city of Indianapolis told Ambrose Property Group on Wednesday that it will use eminent domain if necessary to take ownership of the GM stamping plant property Ambrose had planned to turn into a $1.4 billion, mixed-use development called Waterside “to ensure necessary redevelopment” still occurs there.

But Mayor Joe Hogsett’s administration also encouraged Ambrose to negotiate a deal with the city to avoid the legal process.

“We have set in motion the required steps under state law and will be in touch as the eminent-domain process continues,” said the letter to Ambrose CEO Aasif Bade, which was signed by Donald Morgan, the city’s corporation counsel. The letter came one day after IBJ learned Ambrose had already sold a piece of the property to the Indianapolis Zoo.

Bade did not respond to a message seeking comment.

Ambrose announced on Friday it was dropping plans to redevelop the former GM stamping plant on the west edge of downtown into Waterside, which was to include 1,350 residential units, 620 hotel rooms, 2.75 million square feet of office space and 100,000 square feet of retail space.

Ambrose said that it would instead sell the 103 acres it had acquired for $3 million from RACER Trust, an organization set up to handle abandoned GM properties. It has enlisted JLL to look for buyers.

But the city has had other ideas since it learned on Thursday evening that Ambrose planned to abandon the project. “We’ve been clear with them in our early conversations that the city had an interest in purchasing the property,” said Hogsett’s chief of staff, Thomas Cook.

Cook said eminent domain has been a consideration from the start, but that officials decided Wednesday morning it was time to send a letter to Ambrose to try to compel the firm to the table for negotiations.

As of Wednesday afternoon, the city had not yet received a response to the letter from Ambrose,  but Cook said the city hopes to sit down with Ambrose soon to determine what “a reasonable offer for what the price would be to acquire the property.”

“We have had a very productive working relationship with Ambrose over the last two or three years,” he said. “We are hopeful that they will come to the table in that same spirit and that we can quickly resolve the question of this property. That’s how we hope it plays out over the next couple of weeks.”

Although Ambrose actually bought the property from RACER, it signed a project agreement with the city last year, in which the Hogsett administration agreed to contribute $26.8 million to the first phase of Waterside, primarily for infrastructure and utility work. Cook told IBJ the city has spent hundreds of thousands of dollars on those efforts so far based on that agreement. He said the city is working to calculate a precise figure.

Cook also said that agreement and the spending commitments would not carry over to another developer—unless the city acted to formally transfer them.

“The project agreement essentially says these obligations to develop the site—at least the first phase of development—are Ambrose’s alone, and those rights cannot be transferred to another developer without the city’s involvement and, ultimately, its consent,” he said.

However, there is nothing in the project agreement with the city that would prevent Ambrose from profiting on the sale of the land. So the city is acting to gain control of it quickly, even though Cook said officials have not talked with any developers who have expressed an interest in the site. He said any such conversations will likely be delayed until the ownership matter is resolved, though he acknowledged the city may be interested in reengaging with the other developers that participated in the RACER bid process in 2017.

Eminent domain is a legal process under which a government can force the sale of private property that is deemed to be in the public interest. The goal, Cook said, is for the city and Ambrose to agree on a price for the property. If that doesn’t happen, the decision will be left to a court-supervised appraisal process that averages the value determined by at least two appraisers.

The city rarely uses eminent domain to take control of private property. The most recent—and high profile example—in recent years came when the Department of Metropolitan Development filed to take control of Oaktree Apartments, a blighted apartment community on the east side whose owner was tax delinquent and failed to maintain the property. That legal battle ended in September, with the city winning rights to buy the site.

The city is seeking to avoid that kind of legal battle in this case. Morgan wrote in the letter to Ambrose that “to avoid the delay and expense of a court process, we would welcome the opportunity to begin negotiation acquisition of the property immediately.”

“Given Ambrose’s oft-repeated commitment to the community and the redevelopment of this site in a manner compatible with the surrounding neighborhood, we are optimistic that it will elect this latter option,” Morgan wrote. “If not, we will pursue the eminent domain process to its conclusion.”

The city also asked Ambrose to provide it with a copy of its purchase agreement with the RACER Trust and a log of the expenses it has spent on improvements at the site.

“I’m happy the city is taking a proactive and aggressive stance to try to move this property back in the direction of being developed,” he told IBJ. “This is the right way to ensure the vision [for the site] moves forward and a responsible developer can work on the property.”

Moed said the action shows the city is committed to the economic development plan created by city leaders and the neighborhoods surrounding the GM stamping plant over the past several years, and that “Ambrose can’t be trusted to do what’s in the best interest of the city and neighborhood.”

But Jefferson Shreve, whose City-County Council District 16 includes the stamping plant site, urged caution. He said that while he is “frustrated by the lack of communication from the principals at Ambrose that they were considering jumping out and putting up for sale,” he thinks the city should take a slower approach to its efforts to take control of the site.

He said those involved—from Ambrose, to the city, to neighbors and the public—should have an opportunity to “figure this all out” and determine what the best path forward is for all the development cohesively.

“Do I think that the city should run headstrong into an eminent domain action? No, because I have no idea what that means from the standpoint of the commitment of public dollars to take that down,” Shreve said.

On Tuesday, the Indianapolis Zoo—which sits just to the north of the former GM property—said it had acquired more than 28 acres of land from Ambrose to expand its parking and free up space for additional exhibits.

The zoo secured the two parcels—one that was part of the former GM stamping plant site and one that is adjacent—as part of an agreement with Ambrose made two years ago.

Moed said the city should take into account Ambrose’s recent transfer of land to the zoo—which included about 12 acres from the GM stamping plant property that it sold to the zoo for $3 million. Moed said the sale of that land—and the fact it is equal to what Ambrose paid for the entire GM property—should be considered when the city decides how much it would offer Ambrose to take control of the remaining 91 acres.

“I would hope that [the sale] would be considered in eminent domain procedures, since they’ve already recouped their expenses for the site,” he said.

Officials at RACER Trust declined Wednesday to comment on the city’s move, but they said last that week that they were willing to help city officials as they sought to find a new development for the property.