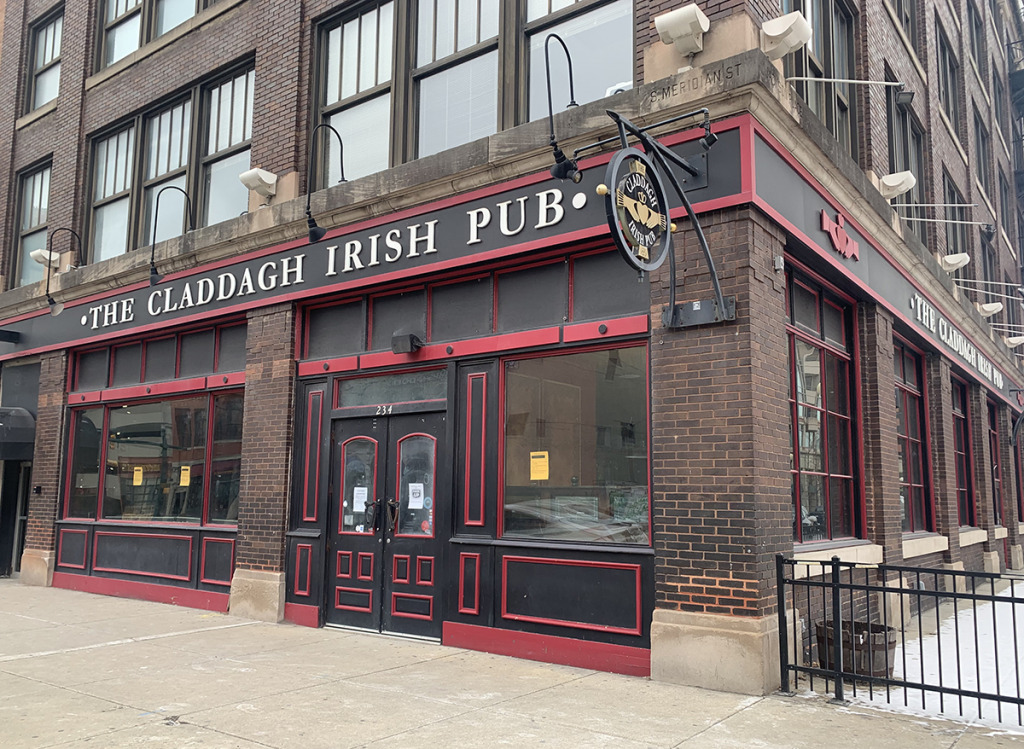 The contents of the Claddagh Irish Pub at 234 S. Meridian St. will be auctioned on Feb. 13-14. (IBJ photo/Lesley Weidenbener)

After establishing a presence in the Indianapolis area in 2000, Claddagh Irish Pub & Restaurant has corked its local taps for good.

The two remaining locations of the Celtic-themed chain in central Indiana have closed permanently, following decisions to temporarily cease operations at the beginning of the pandemic.

A sign posted in the window of the downtown Claddagh Irish Pub at 234 S. Meridian St. says that the contents of the restaurant will be auctioned on Feb. 13-14.

The downtown Claddagh opened in 2000 and was the first location in a chain that at one time numbered as many as 17 locations around the Midwest.

The phone number downtown is inactive, and the restaurant’s Facebook page hasn’t been updated since an announcement on March 18 that it would close temporarily due to the pandemic.

In March, the Facebook page forwarded customers to the Claddagh restaurant in The Shops at Perry Crossing in Plainfield. That location also closed temporarily in March, and a representative of the shopping center’s management company told IBJ on Monday that the restaurant closed permanently near the end of last year.

Likewise, its phone number no longer works, and its Facebook page hasn’t been updated in nearly a year.

Most if not all of the chain’s restaurants have closed in recent years.

Its north-side location at 3835 E. 96th St. closed in October 2018. Justin O’Driscoll, director of operations for CDG Acquisition LLC, told IBJ at the time that road work for a nearby roundabout project had quashed traffic at the restaurant.

The firm had received offers for the property, so it decided the best business decision was to close the restaurant and sell the land, O’Driscoll said in 2018.

The Columbus location closed later that same month as Claddagh declined to renew its lease, according to Columbus Business First.

The five other restaurants outside of the Indianapolis area also have permanently closed, IBJ determined through a web search of press reports in their respective cities.