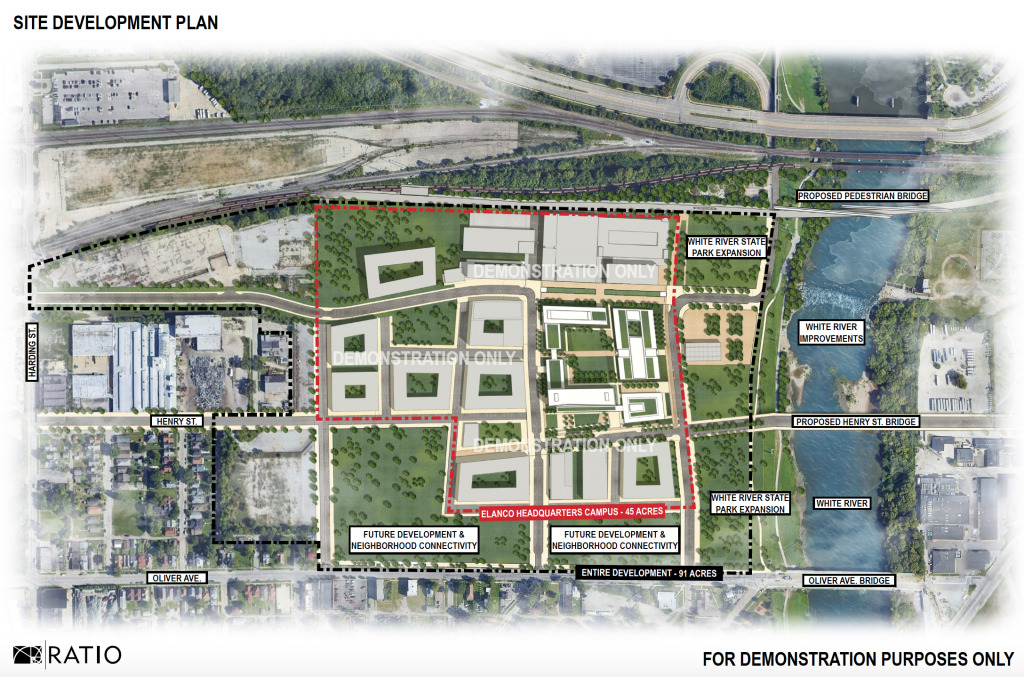 Elanco released this site map of the GM stamping plant property, where it plans to build a $100 million campus. (Provided by Elanco)

The Indianapolis City-County Council on Monday approved $135 million in tax-increment financing bonds that will be used to pave the way for Elanco Animal Health Inc. to build its new headquarters on the former General Motors stamping plant property west of downtown.

The council passed the measure 23-1, with one abstention.

About $64 million of the TIF package will go to Greenfield-based Elanco via a project fund, $51 million will go toward public infrastructure improvements and $20 million will be used for financing and debt. Approval comes more than two years after a late-2018 dinner at the Governor’s Residence sparked Indiana’s bid to keep Elanco in the state.

Elanco will build on 45 of the site’s 91 acres, which Indianapolis acquired in December 2020. It plans to spend $100 million on the project.

“On June 24, 2011, I waited outside the GM Stamping Plant as my husband, Donny, became one of the final GM employees to clock out from that facility,” said council member Kristin Jones. “The plant’s closure left an emptiness in both the lives of its employees and their families and in the life of The Valley and West Indy neighborhoods. I’m thrilled that the decade-long journey to fill that emptiness has ended this evening with approval of the financing needed to bring Elanco to the site.”

Elanco hopes to break ground on the project in late 2021, with the goal of completing and occupying the facilities in late 2023 or early 2024, said Dave Kinard, executive vice president of human resources, corporate affairs and administration, at a June committee meeting.

“We intend to be part of building out an epicenter for animal health and for the community,” Kinard said. “This is not just finding a place where we can drive in and set up shop. We want to be connected.”

The company anticipates about 1,000 employees will work at the site, with an average salary of $145,000, according to Kinard. Most of the jobs are in lab work and research and development.

Meanwhile, the city and Indiana are planning a mixed-used development on the rest of the land that would include affordable housing, neighborhood-oriented amenities and infrastructure to connect the site to downtown and the rest of the west side, according to Department of Metropolitan Development director Scarlett Martin.

“It’s reconnecting that neighborhood back to downtown,” said Council Jared Evans, who grew up near the former GM stamping plant. “… This is finally a good project for this neighborhood, on the west side of Indianapolis.”

Councilors also voted 24-0 to take the site out of the downtown TIF and make the land its own financing district. Now, Indianapolis will be able to finance the debt over the 25-year maximum set out by state law, instead of the 21 years left on the downtown TIF.