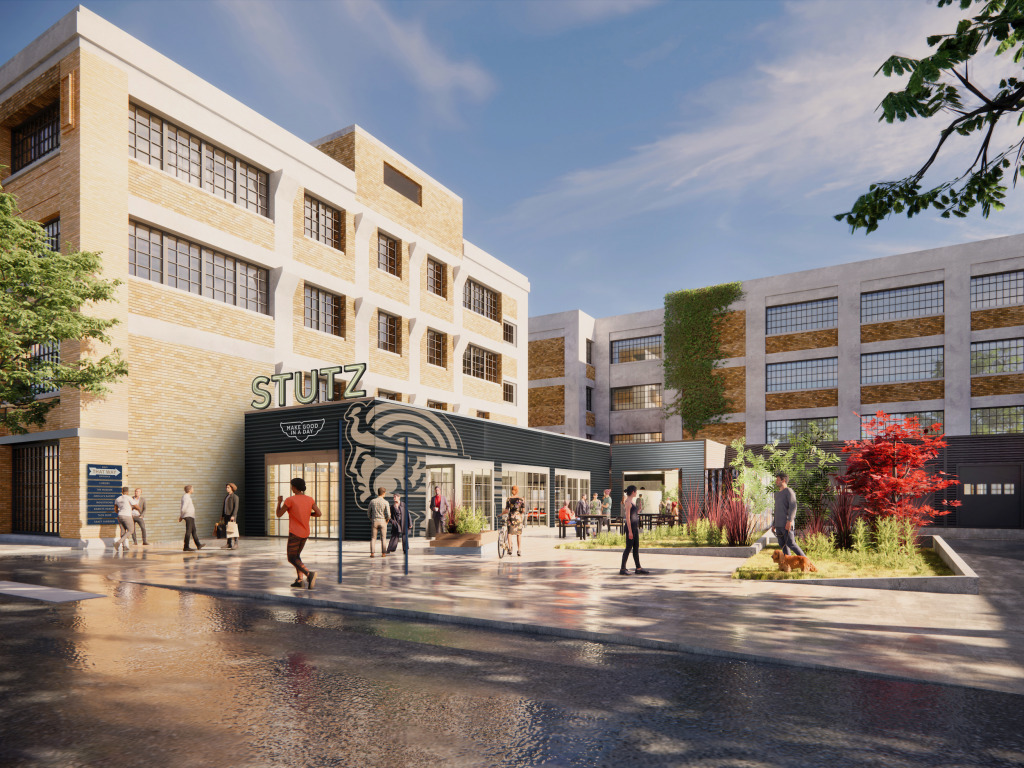 This rendering shows a future entrance to the Stutz on 11th Street between Senate and Capitol avenues. (Image provided by SomeraRoad)

A New York City-based co-working space operator is shoring up plans for a new location in downtown Indianapolis.

Industrious plans to take about 26,700 square feet in Buildings B and C of The Stutz at 1060 N. Capitol Ave., offering 350 total seats in private offices and shared workspaces and conference rooms. It plans to open the location—its third in central Indiana—in January.

““Our latest expansion across the Midwest is a reflection of the growing demand for flexible workplace offerings across key markets,” Doug Feinberg, senior director of real estate at Industrious, said in written remarks. “We’re seeing a redevelopment of Indianapolis thanks to being in close proximity to [IUPUI], and we’re happy Industrious The Stutz can serve this lively neighborhood and provide residents with access to flexible workplace solutions.”

IBJ first reported on Industrious’ plans in August. The company’s other locations are on Mass Ave in downtown Indianapolis and at City Center in Carmel.

“This is more of a mixed-use dynamic, differently amenitized area—a little more artsy in some ways, with everything they are doing with the artists in residence there,” Feinberg told IBJ. “ We’ve moved somewhat away from the traditional central business district growth and we’re really excited about these locations where people have some lifestyle options or a shorter commute … We’re really excited about projects like this and think they’ll be quite successful.”

The Stutz is undergoing a massive, $65 million redevelopment that includes a rethink of many of its uses, with owner SomeraRoad taking a mixed-use village approach to the property that includes new retail and restaurant uses, an emphasis on office space, new event areas and artist studios.

“Industrious provides a creative and collaborative workplace amenity for small businesses at the Stutz,” Basel Bataineh, a principal at SomeraRoad, said in a statement. “SomeraRoad believes that co-working is vital for small business incubation and hopes to support future growth for local Indianapolis startups.”