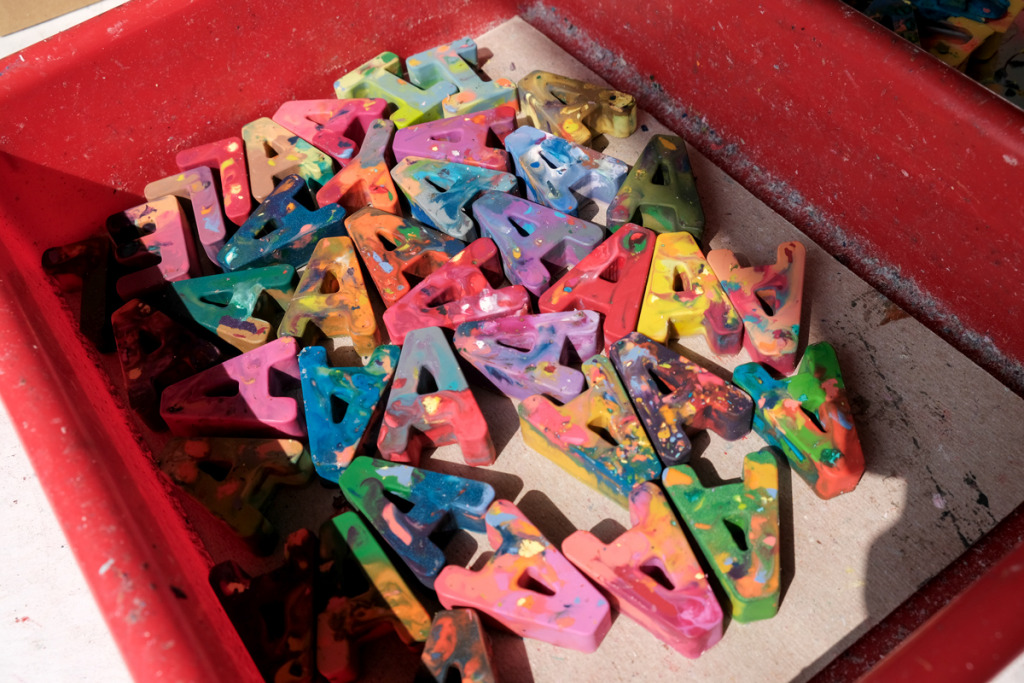 Thirteen years ago, Nicole Lewis was working as an art teacher, splitting her time between two elementary schools.

They were overcrowded. Underfunded. Lewis had a cart she took from classroom to classroom and was doing her best, but sometimes felt discouraged, as she tried to teach students to create art the way she enjoyed so much as a child.

One day, Lewis taught her students how to make molds to create their own crayons. “The crayons looked terrible to me, but the kids loved them,” she said.

That childhood joy for custom-made crayons became the basis for Lewis’ startup, Art2theextreme, which opened in 2007 on Etsy as its first shop to sell handmade crayons.

Copycats later sprung up on Etsy, but Lewis said her shop outsells them all, reinforcing its first-to-market position with the trademark “The Original Rainbow Crayon.” Since its launch, Art2theextreme has made more than 32,000 sales, and nearly 10,000 Etsy customers have named Art2theextreme one of their favorite stores on the platform.

She and her husband, Eric, either slice crayons by hand or with a machine that was engineered by Lewis’ brother in-law, Jason. After the crayons’ wrappings are peeled by hand and the crayons are sorted into lights and darks, they’re broken and set either in molds or melting pods. Then the molds are put in a crayon oven, and some crayons are hand-carved once cooled to add a finishing touch.

Lewis makes crayons in swirls of colors, sizes and themes for multiple occasions. Individual alphabet crayons are packaged to spell out a child’s name. Unicorn horns can become stocking stuffers or party favors. Other crayons look like mini-doughnuts or ice pops.

Art2theextreme even makes ElemenTiles, featuring elements from the Periodic Table for tot-sized Marie Curie-wannabes. Lewis makes more than 680 shapes in all.

The business has been featured in such publications as Food Network Magazine, Good Housekeeping and Midwest Living.

All online retailers have received a boost this year from the pandemic’s stay-at-home orders and social distancing. But Art2theextreme’s unusual products might give it a competitive edge, said Kyle J. Anderson, a clinical assistant professor of business economics at Indiana University’s Kelley School of Business at IUPUI.

“On a platform like Etsy, I think there are a few things that are really important-–one is finding a successful niche,” he said. “It needs to be something a little unique and not selling things other people would make.”

But the path to becoming a successful business owner wasn’t instant or easy for Lewis. She even was laid off from the school where she first made crayons with her students. 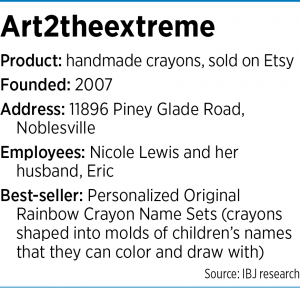 After being called back to teach, she moved from school to school in the district until she and Eric had their first child. School officials wanted her to come back after her pregnancy leave, but she declined.

Instead, she started making crayons, first as a hobby.

Lewis grew up in the Castleton area before attending Ball State University, where she received a degree in art education.

The daughter of a small-business owner and a nurse, she settled on a career path at a young age. “I wanted to do something with arts. I watched my dad grow his own independent business,” she said, referring to Robert Hanley’s Home Video Studio, a video production services company.

Her mother, Denise Hanley, wanted her daughter to achieve that dream. She brainstormed with Lewis about how to launch a career as a small-business owner.

“Hey, have you heard of this Etsy platform?” Hanley asked. Lewis hadn’t, but she soon did.

The platform allows entrepreneurs to launch businesses without the sometimes-steep upfront costs faced by brick-and-mortar startups.

“One of the greatest things about Etsy is that it only takes 20 cents and an idea to open a shop,” said Dayna Isom Johnson, an Etsy trend expert. That pays for the initial listing. Etsy takes a percentage of each sale after that, and sellers also can opt to pay Etsy for advertising or to use its payment system.

While it’s easy to start, Lewis acknowledged, it takes time and expertise to become successful. She’s witnessed competitors come and go, with many not realizing the dedication it takes to sustain a shop.

“You really have to understand e-commerce and customer service,” she said. Visuals are important, too. “My customers come to my Etsy shop and they see professional photos, bright photos. Everything looks like it goes together.”

In a nod to that attention to detail, Etsy in September named Art2theextreme one of 10 finalists in the “kids” category for the 2020 Etsy Design Awards. It is one of a total of 100 finalists in 10 categories.

Etsy plans to announce the category winners (each will receive $5,000) and a grand prize winner ($15,000) by the end of the month. Winners are based on the number of times Etsy users “favorited” an item by tapping on a heart from Sept. 22 to Oct. 7.

As Art2theextreme continues growing, Lewis wants to take some of the load off her and her husband by hiring additional staff who share her business philosophy.

She also is running out of space operating out of her garage in Noblesville and is contemplating opening a studio outside her home or lining up additional warehouse space.

“I need some work/life balance,” she said. “I can’t keep up with production as is.”

The pace will likely continue to quicken, especially if Art2theextreme’s talks with a big-box retailer yield a deal.

Despite all the demands brought by expansion, Lewis said she still enjoys her work.

“I’m just happy that I’m able to make something that makes people happy,” she said.•