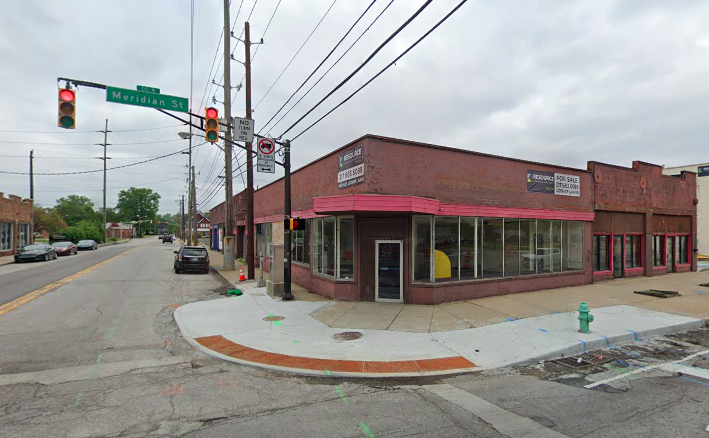 INHP acquired properties at the northwest corner of 22nd and Meridian Streets to encourage creation of affordable housing units there. (IBJ photo/Mason King)

A local developer plans to demolish a pair of vacant office buildings along Meridian Street in the near northside to make way for a $21 million apartment and retail project.

Crestline Development LLC plans to build the four-story building on 1.4 acres at the northwest corner of Meridian and 22nd Streets.

The land was acquired in July for $150,000 by the Indianapolis Neighborhood Housing Partnership in hopes of finding a developer for affordable housing. The property was previously occupied by the headquarters of retail developer Sandor Development Co., which moved to Carmel in 2010.

The project will feature up to 111 units, an enclosed parking garage with up to 90 spaces, and 3,500 square feet of street-level retail space. It will be located adjacent to a stop along IndyGo’s Red Line route at the same intersection.

Allie Rosenbarger, development manager for Crestline, said the company first explored redeveloping the property a little over a year ago. That was before it learned that INHP had plans to buy the property through a dedicated transit-oriented development fund it launched in February 2019.

Crestline submitted a proposal for developing the site after it was bought by INHP.

“We’ve been working in Indianapolis’s different neighborhoods for several years now, but we’ve been really interested in following opportunities along the Red Line,” she said.

She said that although they are not technically partners in the project, Crestline is working closely with INHP on design and other considerations.

Specifics for the project—including total number of units (between 104 and 111)—are still in flux, she said.

Crestline has historically focused on affordable housing, with most of its projects boosted by federal  9% low-income housing tax credits. It has done work in several other Indiana markets, including Logansport, Kokomo and Evansville.

The project will feature studios, and one- and two-bedroom units, along with an amenities center for residents. The retail space will face the Red Line stop along Meridian Street.

Rosenbarger said the building will feature a concrete podium on the first level and wood framing on the upper three levels. Parking will be contained within the apartment and retail structure.

On Jan. 23, Crestline received approval from the Metropolitan Development Commission’s Hearing Examiner to rezone the property from C-4, commercial, to MU-2, for a mixed-use development.

The rezoning must still be approved by the Regional Center Hearing Examiner and the Metropolitan Development Commission.

Rosenbarger said Crestline hopes to demolish the Sandor building and begin construction on the new project this summer.

The developer plans to seek city incentives for the project, likely in the form of tax-increment financing.

Indianapolis-based Blackline Studios is the designer on the project.