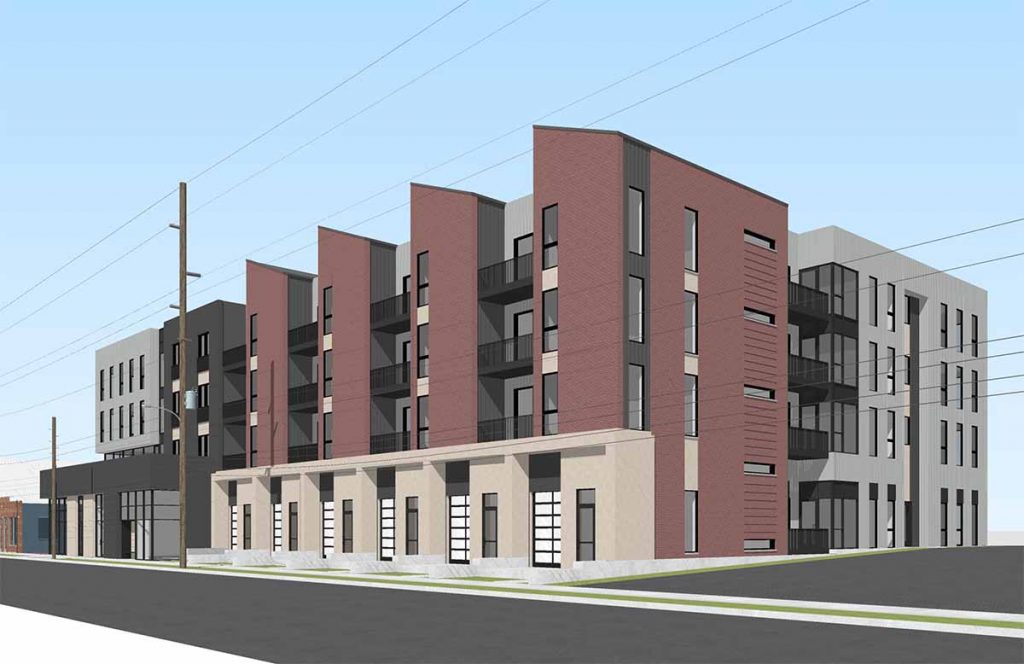 A rendering of the proposed Fountain Square Union project. (Image courtesy of Holladay Properties and Blackline)

Two Indiana-based developers are partnering on a 66-unit apartment project in Fountain Square that would take the place of the hulking Teamsters Local Union No. 135 headquarters on Shelby Street.

The developers hope to break ground later this year.

Tentatively named Union, the project is expected to go before the Indianapolis Historic Preservation Commission in May for preliminary review, meaning no voting is expected—only feedback on the proposed development. The developers would return later for a vote.

Developing the project would entail demolishing the two-story, 30,000-square-foot Teamsters building at 1233 Shelby St. With the address of 1145 Shelby St., Union would sit on the same property and extend a bit farther to the south.

Holladay developer Chase Smith said all of the properties required for the project are under contract. He declined to disclose the expected purchase price. Local Teamsters officials declined to comment on the pending purchase.

The development also would include renovations to a 2,700-square-foot historic building at 1143 Shelby St., which would be reserved for commercial tenants.

The development also would include the even-numbered addresses from 1202 to 1226 Olive St., which are east of the planned apartment building on the other side of the block. The land currently is used for parking and would remain so.

More parking would be available for residents on the east side of the main building.

Smith said Holladay views the project as an opportunity to capitalize on the growth of the Fountain Square neighborhood.

“This is an appealing project for Holladay because it is right in our backyard—our office is on College Avenue in the old Milano Inn—and because it is a chance for us to contribute to the enduring vibrancy of the Fountain Square area,” he said in written remarks.

Holladay moved to the Milano Inn property, 231 S. College Ave., in April 2019. It paid $2.3 million for that and an adjacent property.

Smith said proximity to the Red Line—a stop is about two-tenths of a mile away—was also a factor.

“[We] expect Union to appeal to a diverse selection of renters who want to be downtown and part of the Fountain Square community,” he said.

Pending approval of the project, construction is expected to be completed by late 2021.

Indianapolis-based Blackline Studio is the architect on the project.