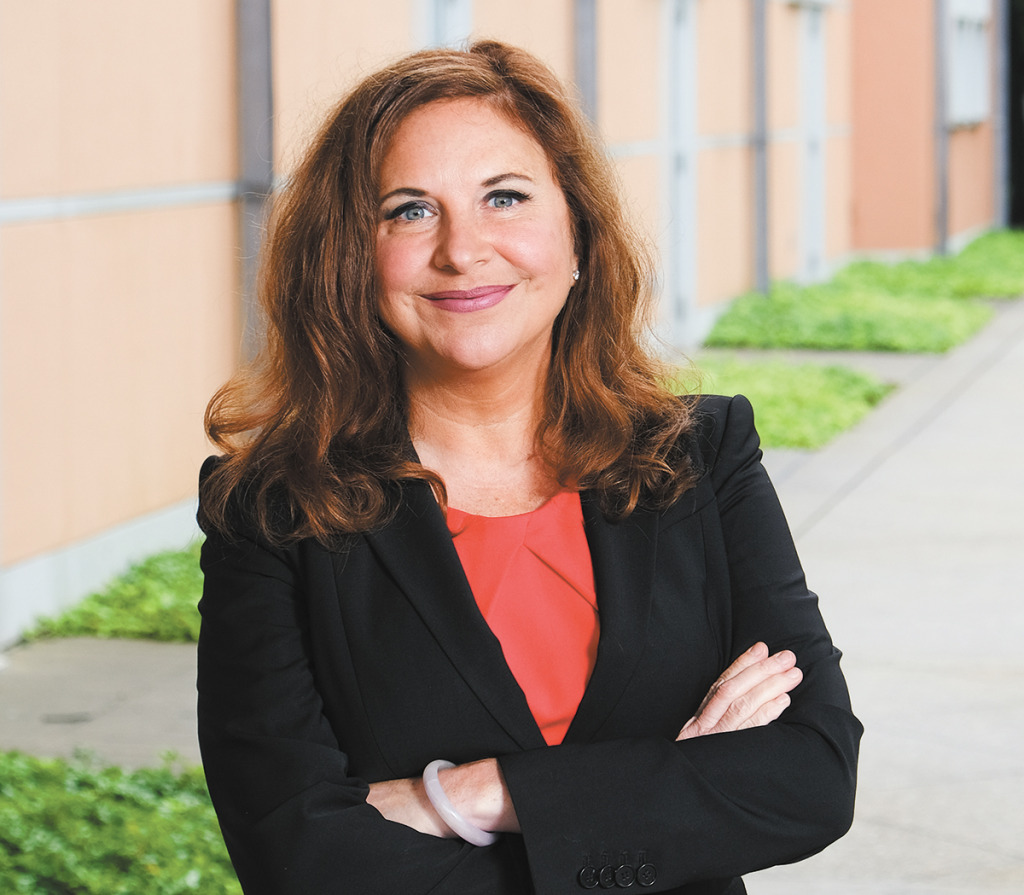 Christina Hale says she wants to pay forward the assistance she received as a young, single mother. (IBJ photo/Eric Learned)

When Christina Hale worked in then-Gov. Frank O’Bannon’s office, she was responsible for identifying individuals to appoint to 300 or so state boards and commissions.

At its heart, her job was to connect people—to find the right person for each board, to build a diverse mix of individuals and to know who would (and would not) work well together.

In every other role Hale has had over the years, she has continued connecting people, especially women, to opportunities for growth and success.

She championed Carey Hamilton during her run for House District 87, which Hale was vacating to run on the John Gregg gubernatorial ticket in 2016.

Even during an interview, after hearing about how a reporter used to speak Italian, she recommended connecting with a local group that meets to cook and speak the language.

That’s not to say Hale isn’t deeply focused on her own career—and when she wants to pursue something, she’s not afraid to go after it. But her mission in life has been elevating other women and families.

“She is first and foremost a promoter of women’s success,” Levander said. “It’s very important for her to see other women succeed and encourage them to succeed.”

It’s Hale’s way of paying it forward and doing what she watched other women do for years. If Hale is taking a step forward, she wants others coming along with her.

“She’s not just about Christina,” said Hamilton, who won that election to replace Hale. “She’s about supporting people that are doing good for our community.”

That started when Hale was young and watched her mom, who was fluent in Spanish, welcome immigrants to Indiana and teach them English. The experience made Hale realize the difficulties her grandmother, who came to the United States from Cuba, must have faced.

And when Hale unexpectedly became a single mother at 19, she quickly learned firsthand about the struggles facing working families.

But Hale had help, and she knows her life would have been completely different if a couple of women hadn’t supported her.

She credits the Michigan Child Care Consortium—started by Janice Englander Katz and Deborah Chubb—as the lynchpin in her adulthood. That program allowed her son, Owen, to get a strong early education while she pursued her degree at Purdue University Northwest and worked.

Before that, she traded babysitting with another woman in the community, but the arrangement was far from ideal. “It was all I could afford,” Hale said. “And, really, the whole life I was putting together could have collapsed, because he was not getting quality care.”

Hale knew it was important for Owen to learn his colors in a classroom, not from “Power Rangers,” as much as she needed to earn her degree.

She also knew any life partner of hers would have to be career-driven and family-oriented as well.

Early in her relationship with her now-husband, Christopher McElwee, the couple attended a speaker series that featured a Chinese woman sharing details about her experience as a political prisoner and talking about standing up for freedom.

Afterward, the two ate pizza, and McElwee—who had attended high school with Hale and had known her for years—said he wanted to seriously date her. Hale said “OK,” but only if he agreed to her list of demands, which required him to quit smoking and focus his career trajectory.

He obliged. He stopped smoking and eventually moved to Indianapolis, where he enrolled in law school. He is now a partner at Monday McElwee Albright in Broad Ripple.

Hale, meanwhile, wasn’t quite sure where her career would take her, but she knew she wanted to help people.

She moved to Indianapolis in 1999, initially working in a variety of state government roles, focusing on community and economic development in addition to her time researching and recommending board appointments. In 2004, she took a job with Kiwanis International and again put her focus on women and families, helping with a vaccination project aimed at making it safer to give birth in other countries.

“I always knew I wanted to be part of finding those really foundational, pivotal solutions for people that can help them to be successful,” Hale said. “Because that was my ticket. [Owen] being able to go to preschool meant that was my ticket. I could get myself to Purdue. I could find that job and bring home a paycheck, but that was the piece that was so significant to make it all go.”

When Democrats were looking for someone to challenge Republican Cindy Noe in House District 87 in 2012, Hale’s name came up.

Former Indiana Democratic Party Chairman Kip Tew, who had known Hale for years because his wife worked with her in O’Bannon’s office, invited Hale over for dinner to float the idea.

Hale had never run for public office, and Tew said she had never expressed an interest in doing so. He was certain she’d say no.

“To my surprise, she said this was something she’d think seriously about,” Tew said.

He also didn’t know if she could win.

“It was a district at the time that had always been Republican,” Tew said. “But we sensed, with the right candidate, it could be competitive.”

Hale proved to be that right candidate and won by 51 votes.

Levander credited Hale’s ability to connect with voters and listen to their concerns as a primary reason.

“She has empathy and compassion for people,” Levander said. “People want elected officials who care.”

Hale ran on a platform of improving the lives of women and children, such as addressing infant mortality or sexual assault rates. But once she got to the Statehouse in 2013, one of the first bills Hale worked on involved cash-for-gold stores.

She said a lot of residents during the campaign talked about home invasions. The stolen goods were being taken to cash-for-gold stores, which at the time were not subject to statewide regulations. Legislation she co-authored changed that. 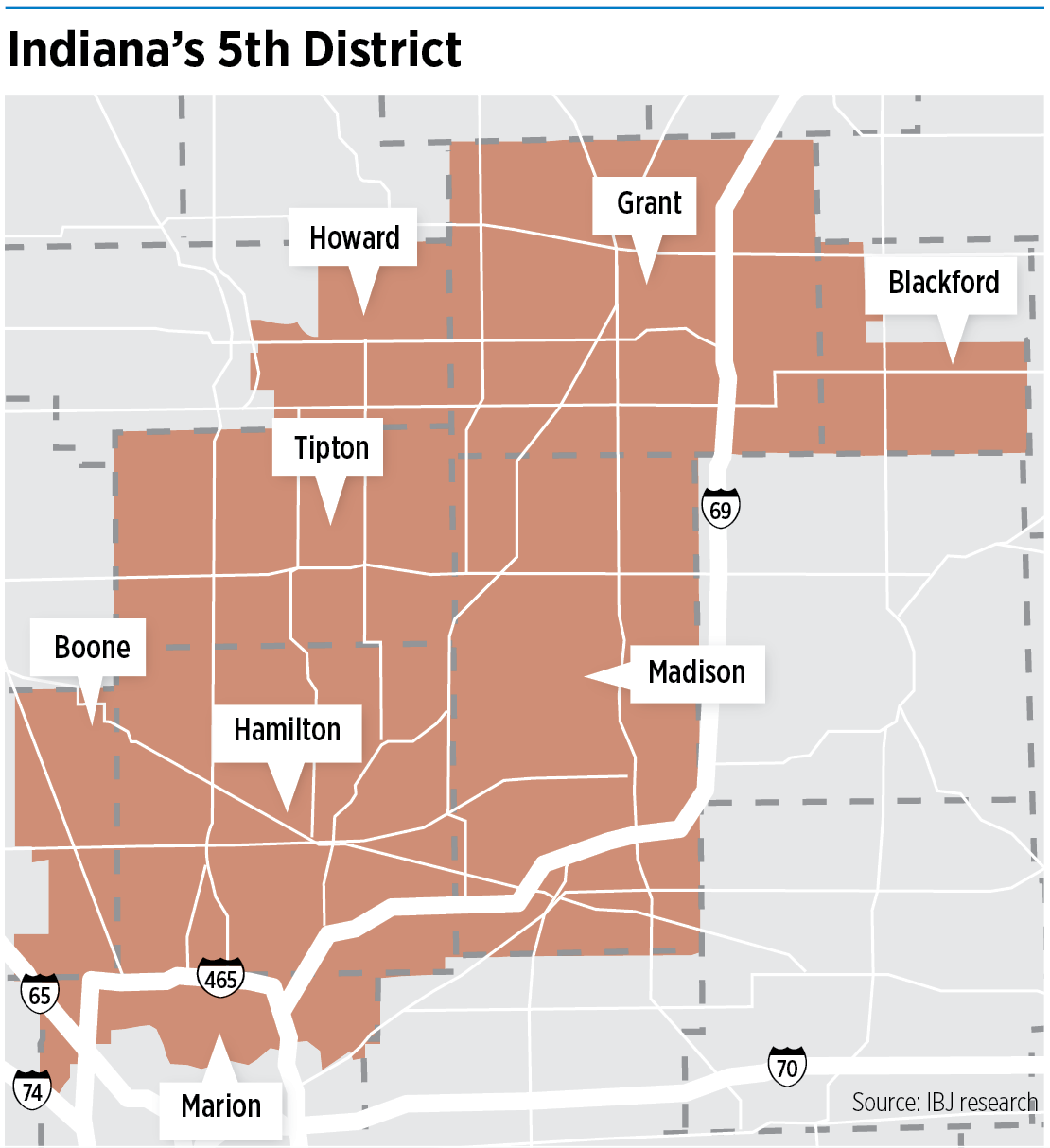 But throughout her two terms, Hale earned a reputation for focusing on women’s issues. She co-authored and co-sponsored bills that dealt with human trafficking and sex crimes.

In all, Hale had her name on some 60 bills that became law—a fact she touts in her first television ad. But in almost all of those cases, she was a co-author or co-sponsor, meaning she wasn’t the primary driver of the legislation. That’s not unusual for a lawmaker who served in the minority party throughout her legislative career.

Hale was the primary author of one bill that became law and provided more privacy rights to sexual assault and domestic violence victims on college campuses.

“Those are not things people necessarily want to talk about,” Levander said. Hale “really pushed the Legislature to acknowledge and recognize there’s a problem here that needed to be addressed.”

In 2016, she spoke in favor of language to make tampons and diapers exempt from sales tax—and started her remarks by acknowledging that her fellow House members were used to her talking about women’s issues.

Her proposed amendments to the bill that made gold bullion tax-exempt failed to pass in the Republican-controlled chamber, but she did earn bipartisan respect.

Mayfield shook Hale’s hand and hugged her on the House floor, just before voting against the amendment.

Hale became well-known for working with Republicans—a necessity for any Democrat in the Indiana Statehouse, where the GOP maintains supermajorities in both chambers.

State Sen. Jim Merritt, R-Indianapolis, said Hale negotiated well and knew how to work the system. He described her as a friend.

“She has some real deep feelings about harm to women, and I supported that,” Merritt said.

In 2016, Hale had an opportunity to elevate her passionate conversations about women and families to a statewide platform.

It meant vacating a safe reelection bid for an uncertain path to the Lieutenant Governor’s Office, but when Gregg—then the Democratic nominee for governor—named Hale his running mate, she took the opportunity and ran with it.

“I really wanted to get out there and call attention to these issues that sometimes get short-shrifted in a statewide campaign,” Hale said. 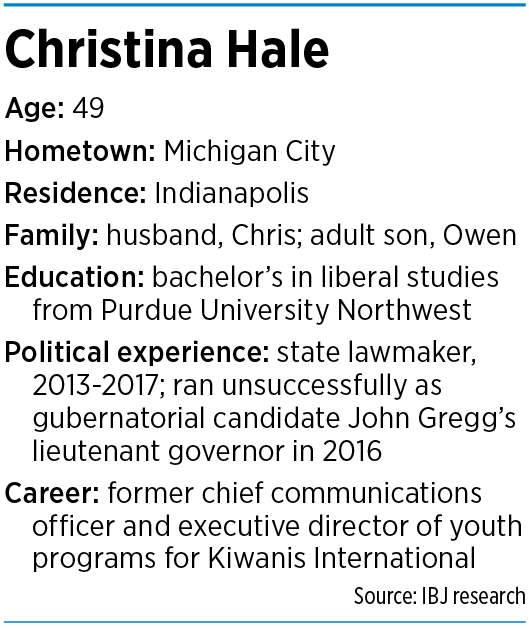 “She could walk into any type of crowd and connect with them,” Gregg said.

But ultimately, he said, he chose Hale because he believed she could govern, should something happen to him.

“You’ve got to have someone who can attract talent, who’s willing to let that talent work,” Gregg said. “She had done that at Kiwanis, so I knew that, if something happened to me, she could put together her own team and govern. … That was the number one question for me.”

They were rarely together on the campaign trail until the final few days, and Gregg said Hale was willing to go wherever the campaign needed her—and event organizers across the state were requesting her.

On long, stressful days, Hale would remind Gregg: “Florida, baby, Florida” as a nod to where both of them enjoyed vacationing and were hoping to get away to after Election Day.

“She was a trooper,” Gregg said.

But she didn’t stay long. She announced her plans to run for Indiana’s 5th Congressional District in July 2019 and left Kiwanis in January to campaign full time. She passed the torch at Kiwanis to Study-Campbell, whom Hale had initially hired in 2019 to fill the new role of director of youth protection.

“Christina was a really fantastic boss,” Study-Campbell said. “She knew when to let me go, but she was certainly there when I needed support.”

On the campaign trail, Hale surrounded herself with a mostly female team.

In Congress, she sees the opportunity to help women and working families on issues like child care, health care and education on a broader scale.

Gregg said he encouraged Hale to run for governor, but he wasn’t surprised to see her run for Congress instead.