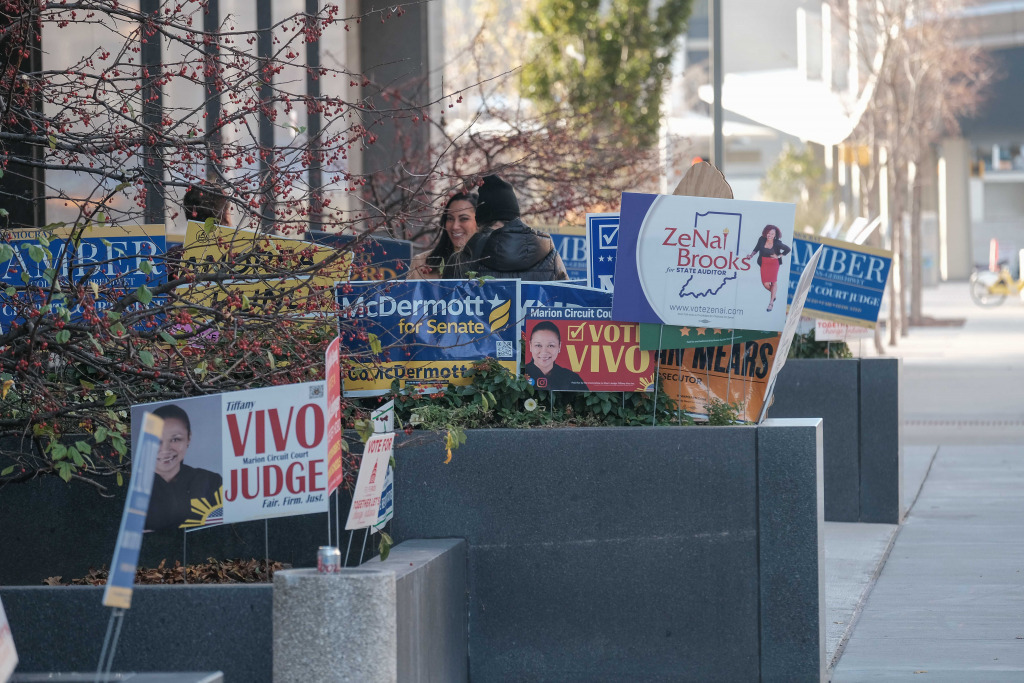 The intensifying Republican dominance of statewide politics and heightened Democrat popularity in Indianapolis raise questions about how or when the opposing party can ever win a statewide or citywide seat.

Meanwhile, the tight battle for control of the U.S. Senate has left some wondering whether Republican leadership will try to persuade Indiana’s Sen. Mike Braun to seek re-election in 2024 or whether the pull of a potential bid for an open governor’s seat will be too great for him to pass up.

What is the way forward for Indiana Democrats?

Democrats performed better than expected nationally, but the midterms were a sobering reminder for Indiana stalwarts of the state party’s limited influence outside Marion County.

Sen. Todd Young (58.7%) handily defeated Tom McDermott (37.9%) by a 21-point margin, and Republican candidates also won races for state treasurer, secretary of state and auditor. Tuesday’s election results extended Democrats’ failure to capture a statewide election to at least 12 years, with their next opportunity coming in 2024.

For Democrats, the most disappointing loss came when Diego Morales (54%) defeated Destiny Wells (40%) in the secretary of state race despite the many controversies that followed Morales throughout his campaign. (Libertarian candidate Jeff Maurer earned nearly 6%.)

The party also failed to make a significant dent in the Republican supermajority in the state legislature and may lose a Senate seat if current results hold, though several House races remain too close to call.

In the House, Republican Kyle Pierce unseated incumbent Democrat Rep. Terri Austin in District 36 in Anderson by a margin of less than 400 votes. In District 32, Democrat Victoria Garcia Wilburn leads her opponent Republican Fred Glynn by a difference of 232 votes, and Democrat Rita Fleming in District 71 has a 225-vote lead over Republican Scott Hawkins in a race that may come down to a recount.

If those results hold, Democrats will have grown their minority caucus in the House from 29 to 30 members.

On the Senate side, Democrat Sen. Michael Griffin appears to have lost his seat to Republican Daniel Dernulc in District 1 in Lake County, increasing the Republican supermajority in the Senate from 39 to 40 members.

“We have more work to do to rebuild our party so we can be more competitive, “ state party chair Mike Schmuhl said. “Next year’s municipal races are good opportunities for us to elect and reelect more Democratic community leaders across the state–and we continue to build on our approach of going everywhere and talking with everyone.”

During this year’s election cycle, the party held 160 events in 70 counties to talk with voters, a strategy that hasn’t delivered the results party leaders hoped for.

But there were some bright spots for the party: incumbent Frank Mrvan was able to stave off a well-funded challenge from Republican Jennifer Ruth-Green in the 1st Congressional District in northwest Indiana. But the fact that the seat was strongly contested in a historically Democratic district was still cause for concern among party leaders.

“It will be tough for Democrats looking forward to 2024,” said Chad Kinsella, associate professor of political science and director of the Bowen Center for Public Affairs at Ball State University. “Any potential candidate saw what happened this year and will be hard pressed to make a jump into a race that will be very difficult to win.”

In 2024, Democrats may be better off focusing more resources on a gubernatorial candidate, according to Andy Downs, professor emeritus of the Mike Downs Center for Indiana Politics at Purdue University Fort Wayne.

What is the way forward for Marion County Republicans?

Marion County Republicans made it no secret that they had high hopes for prosecutor candidate Cyndi Carrasco. But when she conceded defeat to incumbent Democrat Ryan Mears Tuesday night, those hopes were crushed.

Carrasco was well-supported by her former boss Gov. Eric Holcomb, GOP donors, and funds from a national PAC. But she came up short by almost 10 percentage points.

Like Republicans on the national level, the Marion County GOP is having trouble connecting with urban voters and minorities, said Kinsella, the Ball State professor.

“Moving forward, it will be a hard sell to recruit candidates there,” he told IBJ.

Despite the loss, Marion County Republican Party Chair Joe Elsener is optimistic. He said new candidates and potential candidates have come out of the push for Carrasco, though he said he’s not prepared to name any of them yet.

There’s also a chance Democrats could have a contested primary for mayor, visibly raising issues that Republicans could seize on.

State Rep. Robin Shackleford announced her candidacy for mayor on Thursday, setting up a potential Democratic primary contest against incumbent Mayor Joe Hogsett. Hogsett has yet to say whether he plans to seek a third term.

Elsener pointed to Shackleford’s campaign announcement speech, where she discussed concerns about crime, as proof that Marion County voters on both sides of the aisle are unhappy about current approaches to the issue.

“She pointed out that Indianapolis is a tale of two cities, that folks are having pothole- ridden streets and residents struggle to get enough to eat and at any moment, a stray bullet can travel through their wall and strike their child,” Elsener said.

In some ways, Republicans in Indianapolis have more reason to be optimistic than statewide Democrats, Downs said.

There are still Republican legislators representing Indianapolis at the Statehouse and former Republican Mayor Greg Ballard just left office in 2015. The state party also has money to dole out to Marion County candidates, Downs said.

Also, one Republican at least came close this year to flipping a Democrat-held Indianapolis seat at the Statehouse. Republican City-County Councilor Michael-Paul Hart lost by less than 300 votes to incumbent Democratic State Rep. Mitch Gore in District 89, which encompasses parts of Beech Grove and Cumberland.

Jim Merritt, a former Republican state senator who ran unsuccessfully for mayor in 2019, said Carrasco benefitted from the financial support of established Republicans across the state but ran into a “blue brick wall.”

“It might look bleak a couple of days after this election,” Merritt told IBJ. But, he still thinks the right candidate for mayor could turn Marion County “from blue to purple.”

This candidate would likely need to already be well-known and preferably be able to fund their own campaign, he said.

Merritt re-upped his support for Abdul-Hakim Shabazz, political commentator at IndyPolitics.org, to run for Indianapolis mayor. Shabazz told IBJ he is looking at the results of the prosecutor’s race as he continues to consider a run.

Much of the hope for Marion County GOP candidates lies in Decatur, Franklin and Perry townships, where Republicans have stronger support. Shabazz and Merrittt said they would likely analyze votes in those townships to better gauge how Republicans performed there on Tuesday.

“Is our base—meaning the three townships on the south end of the county—did they show up? Do they come out to vote?” Merritt said.

Hart hopes this breakdown will help show what kind of messaging helps to elect Republicans.

What will Braun do?

We’ll likely know in a few weeks whether U.S. Sen. Mike Braun will seek another six-year term or throw his hat into the 2024 gubernatorial race.

“It’s either/or,” Braun told WTHR on Thursday. “I’m going to do something in 2024. And I’ll be making that decision public sooner rather than later.”

Braun’s office did not respond to IBJ’s request for comment. His choice will be whether to try to stay in the U.S. Senate to help Republicans secure a majority in 2024 or stay closer to home by running for governor, which will be an open seat in 2024 because incumbent GOP Gov. Eric Holcomb is term-limited.

Speculation about who might run to replace him in the Senate already is rampant.

Among the Republican contenders floated to replace Braun is Rep. Victoria Spartz, the Ukrainian-born Fifth District congresswoman who reportedly told colleagues that she would run for the seat.

Another potential candidate could include Rep. Trey Hollingsworth, who isn’t running for re-election in 2024.