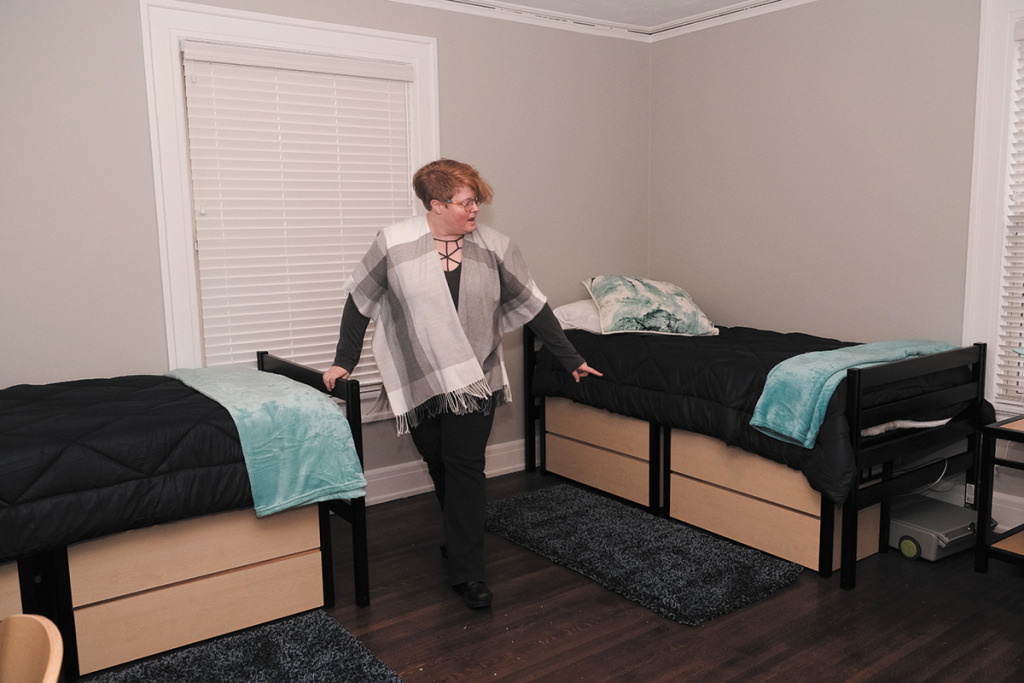 Trinity Haven Executive Director Jenni White says the house can accommodate up to 10 people at a time once social distancing is not necessary. (IBJ photo/Eric Learned)

The state’s first dedicated residential facility for homeless young adults who identify as LGBTQ will open its doors this year in Indianapolis, providing services that advocates say are desperately needed.

The initiative is years in the making. Trinity Haven, now an independent not-for-profit, started as a project of Trinity Episcopal Church in 2016 as the church sought suggestions for how to use a vacant house it owned.

Leigh Ann Hirschman, Trinity Haven’s board president and a member of the church, said leaders talked to local not-for-profits, including the Indiana Youth Group, which serves youth ages 12 to 20 who identify as LGBTQ. They learned that those young people often experience homelessness and have few places to go.

About a quarter of young adults in Indiana who come out as lesbian, gay, bisexual, transgender or queer are kicked out of their homes, said Chris Paulsen, CEO of the Indiana Youth Group.

“A lot of times they’ve been rejected by their families.” she said. “That’s most often the cause of their homelessness.”

Nationally, an estimated 40% of all homeless youth identify as LGBTQ.

And in Indianapolis, Paulsen said, finding help can be complicated, in part because all of the city’s homeless shelters are faith-based and not always welcoming to LGBTQ individuals.

“The existing services just weren’t designed for them,” Hirschman said. “Many of these 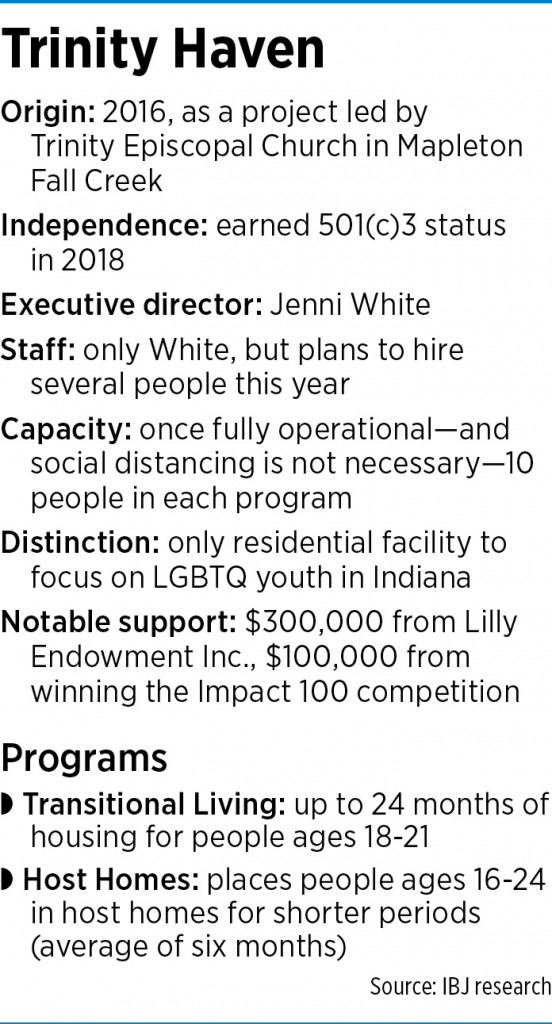 Trinity Haven became its own not-for-profit in 2018. By the end of 2019, it had raised $1.5 million and completed renovations on a house that will be used for one of two programs the organization is launching this year.

That house will be the state’s only residential facility focused on LGBTQ youth.

“Every challenge that we’ve faced has been an incredible opportunity for learning,” said Jenni White, executive director of Trinity Haven. “I’m excited for what’s next.”

The initial house the church planned to use for the transitional housing programs for LGBTQ youth did not work out, but in 2018, the church purchased a different house nearby in the Mapleton-Fall Creek neighborhood.

That same year, momentum for the project took off. The Lilly Endowment awarded a $300,000 grant to the effort, and Trinity Haven won $100,000 from Impact 100 Greater Indianapolis, an organization of women who donate collectively to not-for-profits.

By April 2019, when the board of directors hired White as the organization’s first executive director, Trinity had raised $900,000 and then reached its $1.5 million goal by the end of that year. That’s fairly fast for a new not-for-profit, experts say.

“It would be unusual to raise that much money in that time period without relationships,” Stanczykiewicz said.

The $300,000 gift from the Lilly Endowment—a well-established private foundation—likely gave the organization credibility to attract other donors, Stanczykiewicz said.

The same year Trinity received that gift, foundations across the country gave a record amount of money to LGBTQ causes. That was a 13% increase over 2017, according to a report from New York-based Funders for LGBTQ Issues.

Trinity Haven plans to start hiring a staff and open its doors this year to young adults age 18 to 21, offering them a place to stay for up to two years. The Transitional Housing Program is meant to teach individuals how to live on their own.

A second initiative, the Host Homes Program, will also launch this year and place individuals age 16 to 24 in the home of a community volunteer for an average of six months. “It helps get a young person out of the unstable situation they’re in and in a place where they can feel safe and supported and work very closely with a case manager to determine what the next steps are,” White said.

White said Trinity initially planned only the Transitional Housing Program for this year, then to slowly launch the Host Homes Program later.

But in 2019, the city received $3.88 million in federal funding for youth homelessness and intervention and awarded Trinity Haven about $250,000. So White bumped up the timeline.

“Quite honestly, [the host homes program] was meant to be three to five years down the road, after the house was up and running and we were well established as a young nonprofit,” White said. “We took a leap of faith … now we are on a fast track.”

Each program will be able to serve up to 10 people once fully operational and once social distancing is not necessary. To start, White said, the Transitional Housing Program will have fewer occupants to allow residents to have their own rooms. She expects demand will be high enough to hit full capacity and start a waiting list.

Chelsea Haring-Cozzi, executive director of the Coalition for Homelessness Intervention and Prevention, said Trinity Haven will be “critical” for the community.

“It provides space for LGBTQ+ youth and young adults to be seen, heard and connected in a way that is grounded in trauma-informed care, positive development and inclusivity,” Haring-Cozzi said in an email.

“It is absolutely heartbreaking to know that one reason young people experience homelessness is because their family is unaccepting of who they are and who they love,” she said. “This makes an organization like Trinity Haven that much more important—it’s a place for people to be their authentic selves as they get on a pathway to housing stability.”

Leaders of Trinity Haven stress that it is not a religious organization, even though its roots came from a church.

Hirschman said the church wanted to get involved in supporting the LGBTQ community, because, while it is an affirming church that welcomes everyone today, that was not always the case.

“We understood that the church had some repair work to do,” Hirschman said. “And this was one way to kind of mend a tear in the community with no strings attached.”

Paulsen, who serves as a board member for Trinity Haven, said project leaders made it clear from the beginning that religion would not be required as part of the programs.

“Trinity Haven is not a faith-based organization, but it is supported by faithful people,” Paulsen said.•