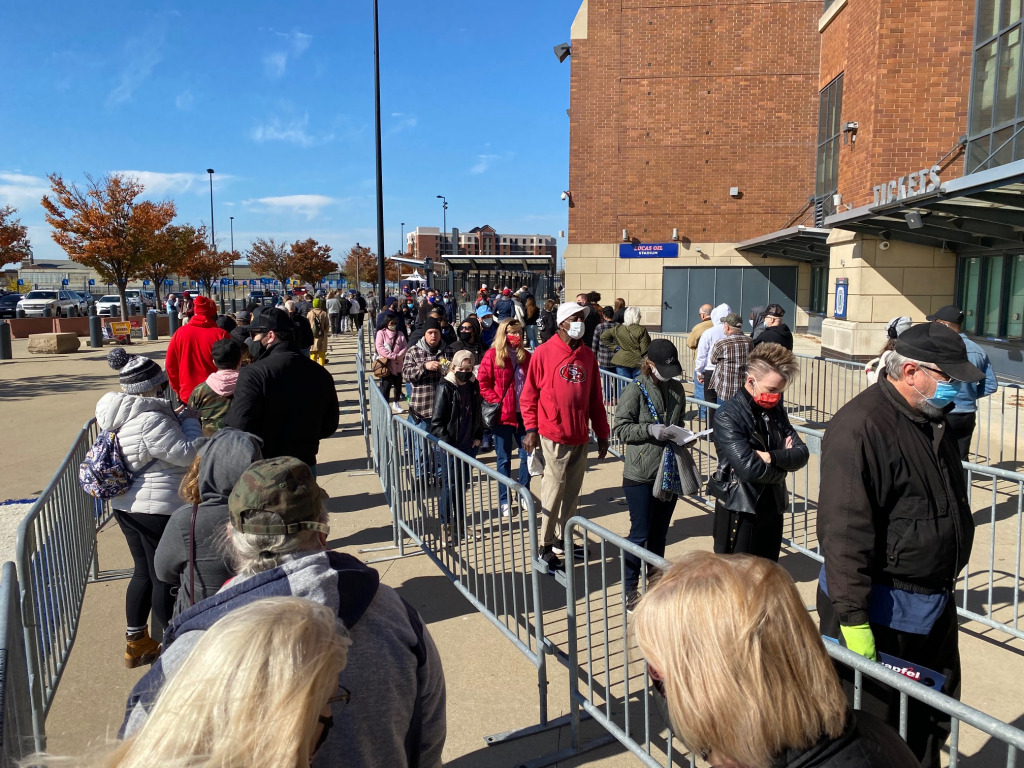 The flood of Indiana voters choosing mail-in ballots or heading to early voting sites has kept up as the final votes are being cast in this year’s election.

With more than 1.5 million votes cast heading into the weekend, Indiana is on its way to doubling the number of early votes cast during the 2016 presidential election and has already tallied more than half of the 2.8 million total votes cast that year.

That follows the national trend of voters looking to avoid possibly crowded Election Day polling places on Tuesday amid the coronavirus pandemic or wanting to make sure there’s no doubt about getting their ballot in.

“I’m not alone in this, but I’m very aware of how historic this election is … with Donald Trump, the coronavirus, a notably divided country—it’s all so critical,” said Brenda Kirkham, 54, who waited more than three hours to cast her vote on the north side of Indianapolis on Friday afternoon. “I’ll be darned if I don’t weigh in and get my ballot in, and I might as well do it early.”

The Indiana secretary of state’s office, which oversees state election policy, said 1,515,641 voters have cast ballots by mail or in-person at an early voting location as of Friday morning. More than 560,000 mail-in ballots were requested by the Oct. 22 deadline, although not all have been returned to county election offices yet.

In the 2020 primary election, 640,225 Hoosiers voted absentee in-person or by mail. In 2016, during the entire period of absentee voting for both in person and by mail, 977,239 ballots were submitted.

Besides the Donald Trump-Joe Biden presidential race, Indiana voters are deciding whether Republicans will continue their political dominance of the state or reward Democrats with some victories as they try clawing back to greater relevance.

Republican Gov. Eric Holcomb has been able to keep up a front-runner campaign for a second four-year term with large advantages of name identification, fundraising and organization over his two challengers, Democrat Woody Myers and Libertarian Donald Rainwater.

Democrats have concentrated much of their fall campaign on capturing the state attorney general’s office and a central Indiana congressional seat that’s competitive after decades as a Republican bastion.

“I would like to see the state’s attorney general stay Republican, but I did something I didn’t think I would do and split my ticket for the 5th District seat,” said 61-year-old Barry Richardson of Carmel, who voted early on Friday. “I’d like to see more done at the federal level on health care, especially with this pandemic still being so serious. I don’t think a lot will get done if we keep a Republican in as our representative.”

Early voting continued through the weekend across Indiana and ends Monday at noon local time. Mail-in ballots must arrive in county election offices by noon Tuesday in order to be counted. A federal appeals court rejected a lawsuit from a voting-rights group to extend that deadline.

The last chance to vote will be at in-person voting sites that are open 6 a.m.-6 p.m. local time Tuesday.

The sheer volume of early votes—43% more than four years ago—has election officials warning it could take more than one day to tally them all, possibly delaying determination of some winners.

“The increased number of absentee ballots could cause a delay in reporting results on Election Night,” said secretary of state Connie Lawson said Friday. “Please be patient and know that election administrators across the state are working tirelessly to calculate results.”

Holcomb said during a news conference Wednesday that all qualifying ballots are guaranteed to be counted, but noted that timelines for getting final tallies will likely vary across Indiana’s 92 counties.

“The sooner the better, but you can’t sacrifice the quality of the job. And you need to be thorough, and it needs to be accurate,” Holcomb said. “That gives Hoosiers the confidence that their voice was not just expressed, but that it was taken into account.”

In Marion County, “a large volume of absentee votes” will take days to get counted once that process begins on Tuesday, said Russell Hollis, deputy director of the Marion County Clerk’s Office. As a result, key races are not expected be decided on Election Night.

“It will definitely take more than one day to count all of the absentees,” Hollis said. “It may take through the end of the week to count all the absentee ballots, depending on the number of ballots we receive.”

More than 211,260 people had cast early ballots in Marion County through Sunday, according to the county clerk’s office. That’s almost three times the total number of early votes in 2016, when only 72,707 people voted absentee by-mail or in-person.

The Marion County Election Board voted Friday to open Lucas Oil Stadium this weekend for early voting. The decision was prompted by hours-long lines at the six early voting sites around Indianapolis in the days before the election.

Hollis said about 7,500 people voted at the stadium over the weekend.