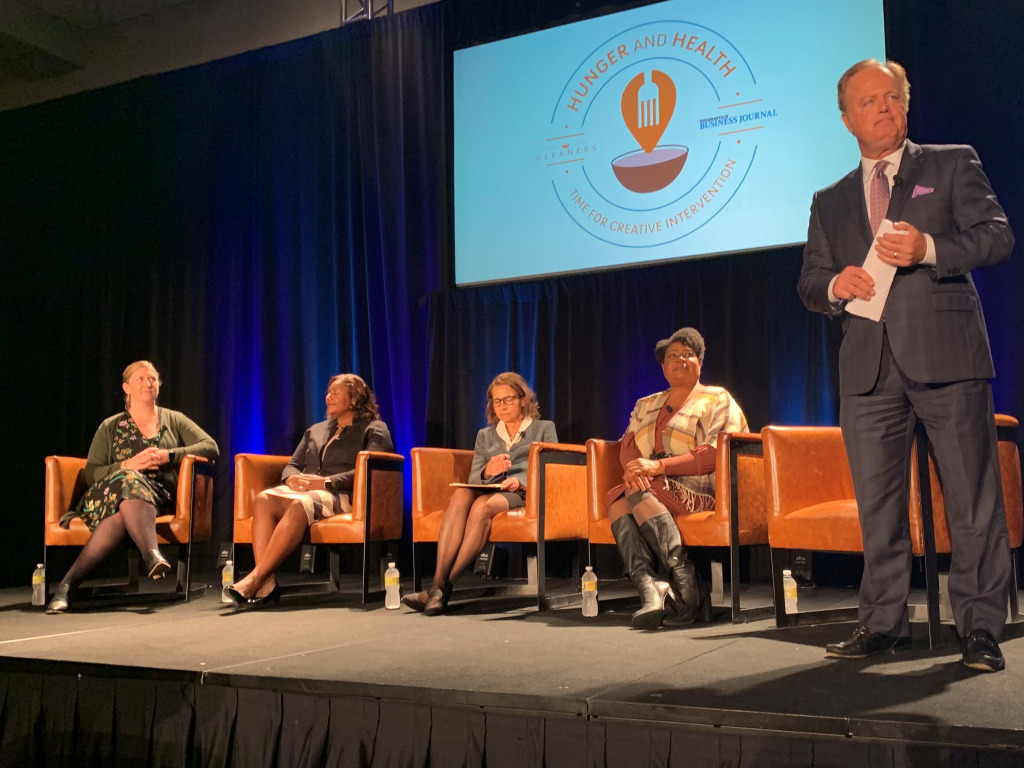 When the new CEO of Gleaners Food Bank of Indiana, Fred Glass, was traveling to food banks in all 21 counties served by the not-for-profit, he noticed a needlepoint sign at Richmond’s Gateway Hunger Relief Center. It said, “If you feed them, they will come.”

As he was taking a photo of the artwork, the assistant manager asked him if he wanted to take it home. In his opening remarks at breakfast forum at the Indianapolis Marriott Downtown, 350 W. Maryland St., on hunger and health on Monday, Glass said that type of interaction is representative of Gleaners’ values.

“She just took it off the wall and gave it to me, which was so typical of the folks that work in our pantries,” Glass said.

The phrase also encompasses a next step for Gleaners—to not only feed those who need it, but to connect them with wraparound resources at the same time. With a panel of experts moderated by Inside INdiana Business’s Gerry Dick, the event explored creative interventions for hunger and health issues.

Much of the conversation involved partnerships between localities, not-for-profits, and health systems. Dr. Lisa Harris, CEO of Eskenazi Health, said the health system is working to meld resources at its health centers, which are strategically placed in areas of high need.

Eskenazi Health is also working on an initiative to make its Fresh for You Market mobile with the use of a retired IndyGo bus. In partnership with Meals on Wheels and the Ryan White Foundation, Eskenazi is also providing medically-tailored meals to homebound individuals as an initiative for using food as medicine.

Milele Kennedy, director of the Indianapolis division of community nutrition and food policy, said the state has been a key partner in supporting Indianapolis food efforts.

“Our local Indianapolis Community Food Access Coalition has over the past two years been able to work with the state in a way that the city and the state have never been able to do before,” Kennedy said.

In September, the city announced a goal to double the amount of fresh produce consumed in Marion County by 2030 with the help of Partnership for a Healthier America. Kennedy said the collaboration with the state and other partners has helped to make that goal possible.

Dr. Cameual Wright, vice president of CareSource, said food can also be used as medicine to help lower Indiana’s rate of maternal mortality. She said a lack of food contributes to “toxic stress” that can have negative effects on mothers and babies.

Naima Gardner-Rice, SNAP education and nutrition programs director with the Indiana Department of Health, said a maddening part of working in food is that after decades of initiatives and efforts, health outcomes haven’t improved.

“The question is, why, after billions upon billions of dollars being poured into these really downstream issues, why is the needle not moving?” Gardner-Rice said.

She said this has shown her that a focus needs to be on upstream issues, like food production, rather than just on the downstream outcomes of food insecurity.