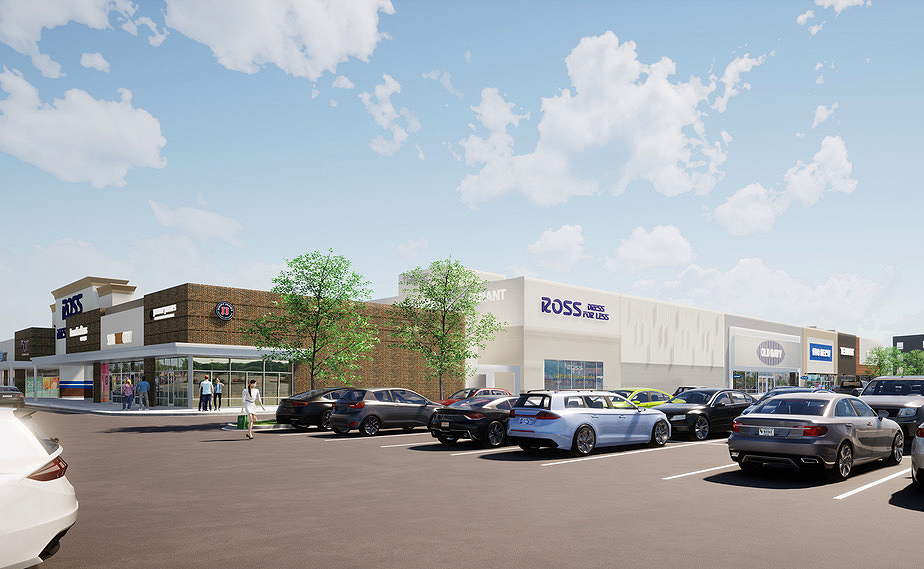 This rendering shows how Ross Dress for Less, Old Navy and other new retailers will be configured in space formerly occupied by Macy's at Glendale Town Center. (Rendering courtesy of Kite Realty Group Trust)

The owner of Glendale Town Center plans to market three new outlots as part of an ongoing renovation to the shopping complex that includes the addition of new tenants to backfill the former Macy’s space.

Indianapolis-based Kite Realty Group Trust plans to lease the parcels—two along 62nd Street and one on Keystone Avenue—with hopes of drawing new retail or restaurant users. The outlot sites are currently used for parking.

In addition, a Kite official said local Culver’s franchisee Jeff Meyer has secured the former O’Charley’s restaurant at 6111 N. Keystone Ave. to build a new Culver’s there. Kite does not own that parcel. Meyer could not be immediately reached for comment.

In written remarks, Tom McGowan, president and chief operating officer of Kite, said the outlots are among several ongoing Glendale initiatives that show “that great real estate will continue to evolve and provide value to the surrounding community.”

The company told IBJ in mid-2019 it planned to spend about $15 million to redevelop the former Macy’s space by splitting at least 53,000 square feet on the second floor—which technically is street level on the south side of the mall that faces Target—into four stores with separate exterior entrances.

So far, Ross Dress for Less, Old Navy and Five Below have signed on as tenants for three of those spaces, occupying a combined 49,000 square feet. A fourth user has not yet been identified. In all, the Macy’s space spans 237,000 square feet.

The updates include a new facade for the south and west sides of the shopping center.

The local real estate investment trust purchased Glendale in 1999 for an estimated $20 million and spent about $45 million on a major renovation completed in 2000. Further renovations over the following eight years converted the mall into an open-air “lifestyle center.”

Glendale will eventually have to backfill the Glendale branch of the Indianapolis Public Library, too, with the branch moving to a new home. The library occupies about 25,000 square feet in a building that also houses a Staples.

A Kite spokesman said plans are still in the works to determine what will be done with the remainder of the vacant space.

“In addition to the announced retailers, we are in active discussions with a variety of concepts for the remaining availability at Glendale Town Center, said Bryan McCarthy, senior vice president of marketing and communications for Kite. “We look forward to sharing additional announcements in the near future.”

The renovation to the Macy’s space and introduction of new outlot opportunities come as Kite and partner Milhaus continue work on a $40 million apartment project at Glendale. The 267-unit, five-building AYR development straddles Rural Street, one block east of Keystone Avenue, which is also being redesigned to add bicycle lanes. The complex is being constructed on land previously used for parking.

The combined apartment and retail projects fetched about $7.1 million in tax-increment financing from the city of Indianapolis, which will supplement the overall development.

DKGR is the architect on the project.