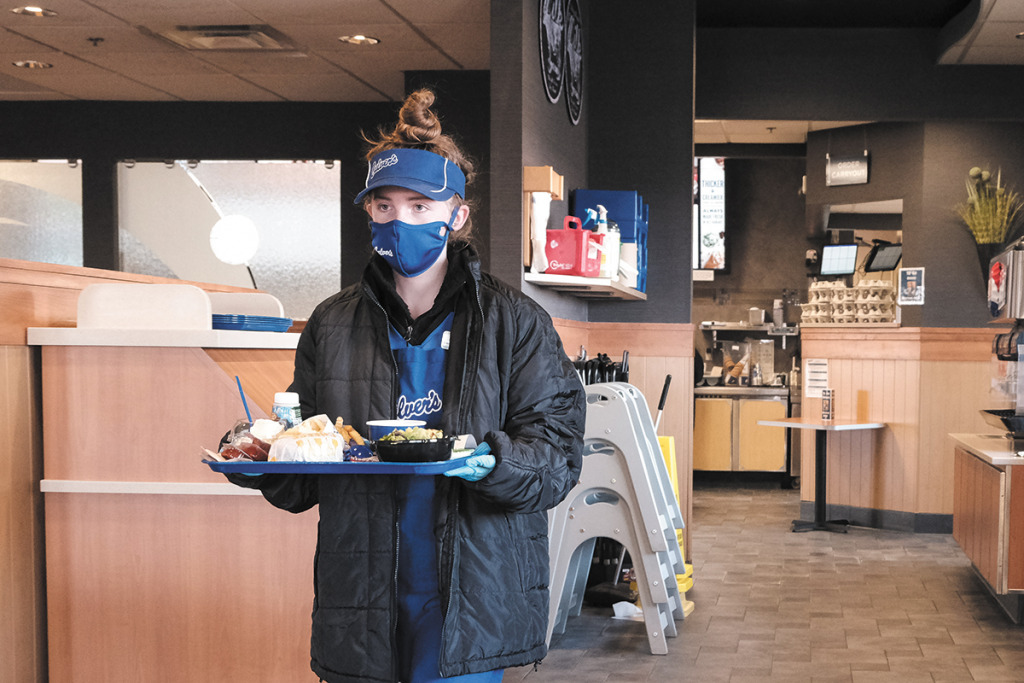 Brylee Dawson, at top, carries an order to customers dining at the Fishers Culver’s on Olio Road. (IBJ photo/Eric Learned)

Culver’s “most-passionate franchisee” is repurposing a downtown Noblesville landmark for his company’s headquarters and preparing to nearly double his restaurants in the next 14 months.

Eventually, he figured he’d learned enough from watching the successful locations operate that he could open his own Golden Arches. But it wasn’t that easy. The market was saturated, and McDonald’s would have required him to leave the state to open a store, he said.

So, instead, he partnered with Culver’s. More than 15 years later, he owns 12 locations in three states. Now, he’s planning to leverage that network to open as many as 10 more in Westfield, Carmel, Indianapolis, Whitestown, Jasper, Seymour, New Castle and beyond by early 2022. He’s already identified seven locations.

He’s also turning the former Noblesville Boys & Girls Club at 1700 Conner St. into his company’s headquarters. And he plans to keep things rolling by opening another eight to 10 stores by the end of 2023.

“It’s exciting to hear he has plans to fill in Indiana,” said Rich Modjeski, vice president of franchise services for Culver’s Franchise System LLC. “To Jeff, there’s no such thing as [staying] content. He has a number of restaurants that are successful now, and there is nothing in his DNA that would allow him to settle and just be.”

Wisconsin-based Culver’s is a privately owned chain, made up almost exclusively of franchised restaurants serving American fare, such as its signature Butterburgers, cheese curds and frozen custard. In 2019, Culver’s sales grew more than 13% and—despite the pandemic—the chain broke its own growth record in 2020 by opening 50 new locations. In total, there are more than 780 Culver’s locations in 25 states.

Modjeski said the company doesn’t push its franchisees to rapidly expand, and it isn’t pressuring Meyer to double or triple his portfolio. But he said Meyer is driven: “I would say he may be our most passionate franchisee.”

Meyer said that drive comes from the “individuals that work for me that want more. … They want to be more successful. They want to give their family more than they’ve ever had.”

The road to Culver’s

Meyer, 47, grew up on a farm in Rushville. While driving a delivery truck for Cincinnati-based Klosterman’s, he’d take note of the size of orders at his McDonald’s customers. He figured: the more buns, the better the business.

“That was my insight on how the restaurant industry operates, what they do and how they do it. By spending time in their stores and watching what they do, I picked up that side of the business,” Meyer said. “I took that knowledge and my father’s entrepreneurial spirit to make a pathway to get started in Culver’s.”

Even though Meyer was approved to open a McDonald’s, the self-proclaimed homebody didn’t want to move out of state. Then, a friend from his bun delivery days reached out.

Meyer said Paul Groen, whose father invented the Filet-O-Fish sandwich for McDonald’s, told him about a restaurant he and his children would visit when they went to the Wisconsin Dells. So, Meyer drove to a Culver’s north of Dayton, Ohio, in the spring of 2004.

“I’ve never met a stranger, but when I went to the corporate office, Craig Culver treated me like a son,” Meyer said. “He was the nicest guy. Somebody of his caliber—as nice as he was, and that he generally cared about my well-being and future—it’s unheard of in today’s industry.”

“Me and my wife opened our first one and, literally, it was down to our last $20. We were all in. But that’s what an entrepreneur does—they lay it all on the table,” Meyer said. “I didn’t take a paycheck for four years. I probably ate more Culver’s than anyone in the history of Culver’s because we just didn’t have the money to continue to go to the grocery store.”

The Meyers took care of their customers while living off one paycheck—until the customers started taking care of them. Meyer said one store led to another 11. Along the way, Meyer’s Bloomington and Richmond locations had the first- and second-largest grand openings in Culver’s history.

‘Not an easy business’

Girish Mallapragada, an associate professor of marketing at the Indiana University Kelley School of Business, said Culver’s has built its success on Midwestern food.

Mallapragada was impressed to hear Meyer not only had 12 locations, but that he was planning to nearly double that number within a year or so.

He said Culver’s has built customer loyalty on its regional appeal, and Meyer seems to have ironed out the sort of operational challenges that sink many franchises. However, that Midwestern focus might just limit the business’s expansion.

“It’s a plus and a minus,” Mallapragada said. “All of the Midwestern states become game, but it becomes a little more tricky when you talk about the bigger markets on the coasts. Burgers are not an easy business to be in.”

He said one aspect that’s helped Culver’s grow in central Indiana is the growing suburban population. In less-dense areas, each Culver’s location has a three-mile buffer zone, to keep restaurants from cannibalizing one another’s customers. That perimeter shrinks in denser cities.

Meyer hasn’t settled on a total number of restaurants he’d like to open. Instead, he said, he’s pacing himself in accordance with his workforce.

“I’ve got the greatest team anyone can ever assemble. I don’t do this growth for myself; I do it for them,” Meyer said. “I don’t have an end game. We could be at 100 stores, 150 stores. I just don’t know. I will only stop when my team says enough is enough.”

Modjeski said Culver’s already has franchisees in Florida, and Meyer just closed on a location in Savannah, Georgia. According to Modjeski, part of the reason Culver’s has been able to spread so far is the breadth of its menu.

“There are guests that come three, four, five, six—and on some occasions seven—days a week,” Modjeski said. “If we offered just cheeseburgers, we wouldn’t see that type of guest. That allows for some variety in our location.”

As part of his expansion, Meyer is moving company headquarters from a 6,000-square-foot office at 3501 Conner St. to the former Boys & Girls Club downtown.

Sarah Reed, Noblesville’s community and economic development director, said Meyer approached her in 2018 to talk about how he might use a portion of that 55,000-square-foot former high school to benefit the community.

In addition to moving his 30 employees into new offices, Meyer said he wants to turn a portion of the 100-year-old building into coworking and event space. He’s got plans for a podcast recording and editing room, a workout and fitness facility with a basketball court for coworking members, and a high-tech auditorium for Culver’s regional marketing meetings or other big events.

Meyer said redeveloping the building will cost more than $3 million, so he’s looking to the city for a 10-year tax abatement. He’s also planning to run the coworking space as if it were a not-for-profit to give budding entrepreneurs the opportunity to succeed.

Reed said she anticipates the city will grant Meyer the abatement, but officials have yet to reach a formal incentive agreement. As for the use, Reed said the city supports Meyer’s idea. She said the coworking space will be unique and within walking distance of many downtown businesses. It will also feature a state-of-the-art auditorium with a digital wall, like the ones used in TED Talks.

Reed said the project also has the advantage of being built after the start of the pandemic, so its design might take into account the limitations the disease places on group work settings.

“There are a lot of aspects to this particular renovation that could benefit Noblesville as a whole, and especially the downtown,” Reed said. “It will be really good for startups and those companies that are reevaluating, either to growth or employee loss, during COVID.”•