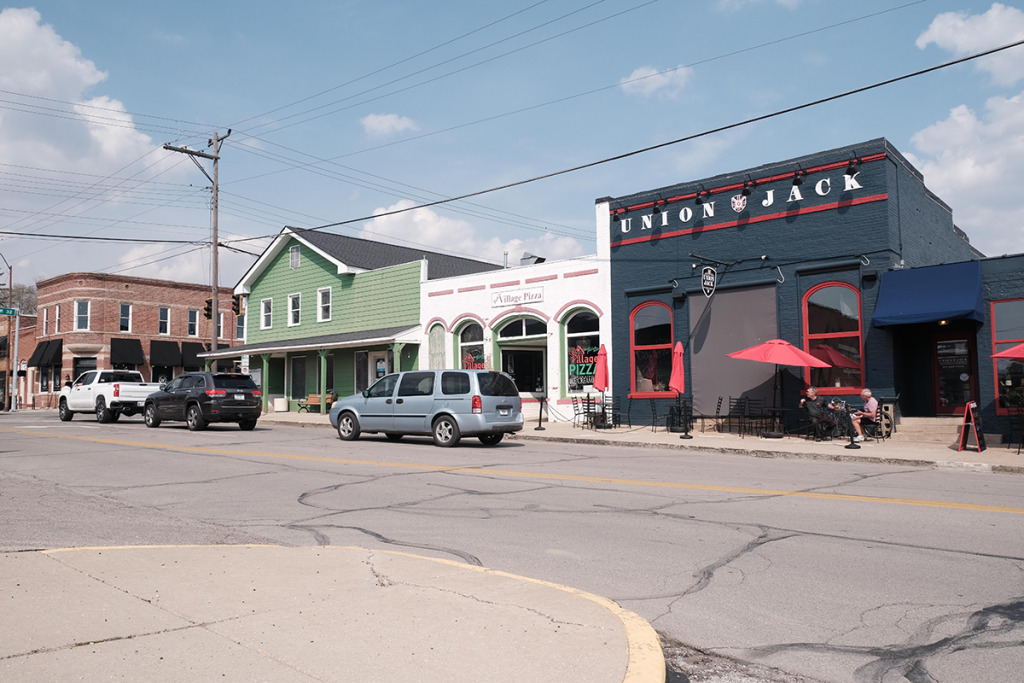 Some residents are concerned about buildings in the Westfield Historic District that are slated to be demolished as part of the road-widening project. (IBJ photo/Eric Learned)

The State Road 32 expansion project in downtown Westfield hit a speed bump Wednesday when the Indiana Historic Preservation Review Board of the Department of Natural Resources voted to prolong the proposed route’s review.

The city of Westfield and the Indiana Department of Transportation have identified a preferred path for their joint State Road 32 widening project that would require four historic downtown buildings to be removed or demolished to allow the road to expand from two lanes to four.

After several hours of discussion and public comment, the six-member historic body voted to postpone the route petition’s review at least 30 days so the concerned preservationists could meet with city officials to refine the petition’s historic mitigation commitments. A specific time, date and location weren’t identified for the special meeting.

Each of those buildings have historic significance. The one-story, brick commercial building at 101 S. Union St. was built in 1924 by Emmet and Chase Mendenhall as a drugstore, complete with a pharmacy and soda fountain.

Much of the public’s concern was focused on the two-story, gable-roof building at 102 S. Union St., which was built around 1860 as Fuderburgh’s grocery store. Recently, it operated as Erika’s Place restaurant before it became Dance Innovations.

Members of the public spoke about the property’s historic significance as the oldest commercial building in the city, and the lack of consideration their proposed alternative road plans were given.

“We need something substantive for the loss of four historic buildings, and possibly for the loss of the Westfield Historic District,” said Mark Dollase, a concerned party and vice president of preservation services for Indiana Landmarks. “I expect, and I think others in the room expect, more substantive action.”

The Westfield Historic District is bounded by Penn Street on the north, Walnut Street on the east, Park Street on the south and Camilla Court on the west. It was listed in the National Register of Historic Places in January 2019. The designation could be threatened by the loss of the four structures in the path of the proposed route.

The route petition outlines commitments the city and INDOT have agreed to as a way of mitigating the project’s impacts on historic properties. In short, those commitments include:

Dollase said he doesn’t believe those and the other commitments, as written, would offset the damage that’s going to occur to the Westfield Historic District in any meaningful way.

“If the city and INDOT are willing to refine that to language that is a little bit firmer, that’s something I can get on board with,” Dollase said. “But, there’s a little bit of a trust gap here at the moment.”

John Nail, Westfield’s city engineer, said delaying the route’s approval puts the project under a time crunch. Such a delay could add cost to the estimated $15.9 million project.

“We’re going to do our darndest to get it here in the next month,” Chris Smith, deputy director of the DNR’s regulatory team and the board’s meeting chair, said.