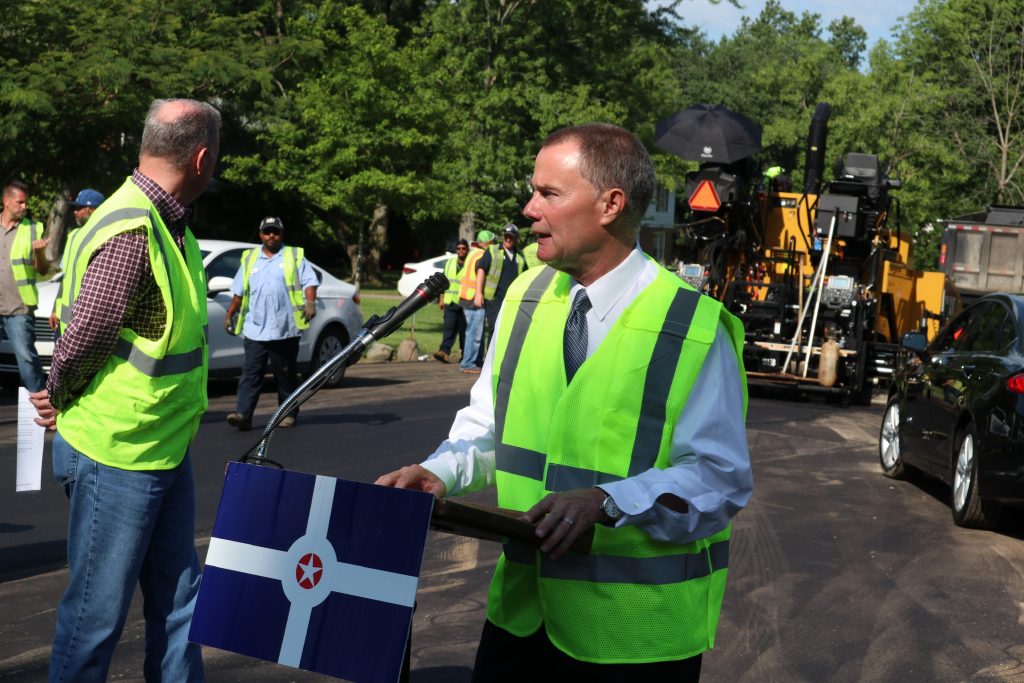 Indianapolis Mayor Joe Hogsett wants the city’s road crews at the Department of Public Works to operate like police officers working their beats.

Hogsett’s 2020 budget proposal for DPW, which has an $8 million, or 4% increase, includes a plan that’s essentially “DPW’s version of community beat policing,” said department director Dan Parker. The proposal, Parker said, will “turn DPW from a reactive force to a proactive force.”

Parker said street operators currently work on one shift, from 7 a.m. to 3:30 p.m. A second shift would run from 4 p.m. until 12:30 a.m., allowing workers to cover more requests at more hours of the day. He said the new hours and realignment would allow the workers to get more familiar with their territories and tackle problems proactively.

Parker said the justification for the proposal is that calls to the Mayor’s Action Center are on the rise. Calls have increased 54% over the past 10 years, and a majority of the calls are for DPW-related issues.

“We need more people,” Parker said. “We need to make sure we’re not burning our people out.”

Steve Quick, union leader for the DPW staff members, said he supported the plan, stating, “this night shift is a long time coming.”

He said DPW staff members are trying to “fit 24 hours of work into an eight-hour day.”

The public works committee also on Thursday unanimously approved a proposal to appropriate $40 million in revenue bonds to fund road and bridge infrastructure. The plan also will need to be voted on by the full council.

The debt will help finance the $118 million worth of Marion County road and bridge repairs planned next year as part of Hogsett’s annual budget proposal.

The City-County Council in 2018 unanimously approved Hogsett’s plan to issue $120 million worth of debt over four years to fix the city’s aging roads and bridges. The city is borrowing against future gas tax revenue increases. The bonds will be the second round of debt issued under that plan.

“We’re piecemealing this out so we can address [projects] as we have the ability to do the work,” Adamson said.

IBJ reported in 2018 that the city’s plan to issue debt to pay for infrastructure projects could harm the city’s credit rating if the road projects don’t have a long shelf life, according to municipal credit ratings experts.

However, Sarah Riordan, director of the Indianapolis Bond Bank, said the projects financed by the debt, including curbs, sidewalks, ADA ramps and bridge rehabilitation, have shelf lives ranging from 30 to 50 years.

“We have to ensure the useful life of the work we’re doing exceeds the number of years we’re paying,” Riordan said.