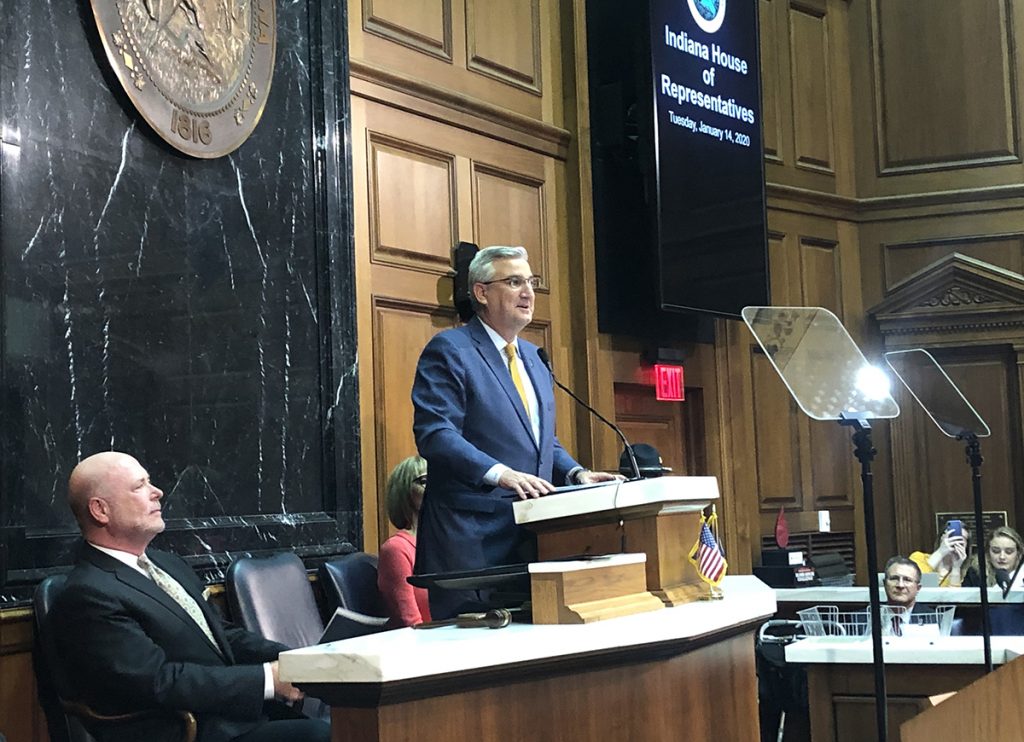 Indiana Gov. Eric Holcomb touted the state’s economic success—including a new $400 million auto-plant investment—at the start of his annual State of the State address Tuesday night and then proposed a roundabout plan to boost teacher pay in future years.

Holcomb said Fiat-Chrysler will invest $400 million in its Kokomo facility and hinted that a second investment announcement will take place on Friday at Toyota in Princeton. The latter is expected to involve a significant number of new jobs and a large investment.

The Indiana Economic Development Corp. said Fiat-Chrysler plans to expand and retool its Indiana Transmission Plant II for production of a new engine—the cylinder GMET4. It will be the first time Fiat-Chrysler has built an engine in Indiana. The IEDC said the production will “require a workforce of more than 1,000 by the end of 2021,” but the company has not finalized how many of those will be new positions.

“Our strong economy didn’t just happen,” Holcomb said. “We did it the old-fashioned way—we earned it.”

Fiat-Chrysler, which is headquartered in Auburn Hills, Michigan, employs 92,000 people in North America, including more than 7,900 at three transmission plants and one casting plant in Indiana.

Also during his speech, Holcomb celebrated milestones at the state’s Department of Workforce Development: 10,000 Hoosiers have completed a Next Level Jobs Workforce Ready certificate program and more than 900 businesses have trained employees using Employer Training Grants. Both programs were part of previous legislative agendas.

As expected, Holcomb also addressed the issue of teacher pay—but probably not in the way educators were hoping.

Holcomb is proposing that the Legislature use $250 million from the surplus projected for the 2022-2023 budget (not in its current, two-year spending plan) to make a one-time payment on a teacher pension obligation. The move would free up $50 million the state currently spends on pension obligations annually that Holcomb says the Legislature should instead spend to boost teacher pay.

Educators and school officials have been lobbying Holcomb and legislators to put more money into education and teacher salaries this year, but Republicans have maintained that it’s not appropriate to do so because 2020 is not a budget-writing year.

Still, the governor raised the hopes of teachers last week when he made comments that some interpreted to mean he might take more direct action this year, in part because tax revenue is rolling in ahead of the state’s forecast. But instead, Holcomb is proposing to use some of the surplus revenue to fund six capital projects at higher education institutions in cash, as opposed to issuing bonds, to free up money for other spending.

Holcomb’s proposal is similar to one he announced during his 2019 State of the State address, when he said he wanted to use $150 million to pay down a separate teacher pension obligation. Lawmakers included the proposal in the current two-year budget, which they approved last year. Holcomb’s administration says the move is saving school districts a total of $65 million per year.

The new proposal is different in that it would free up money in the state budget, not in school budgets. So, the $50 million in annual savings would benefit the state’s general fund—and there is no requirement that lawmakers spend the money on teachers.

Holcomb said he’s still waiting to hear recommendations from the Next Level Teacher Compensation Commission, which should publish a report in the spring, before making other proposals about educator salaries.

Democratic leaders in the Indiana House and Senate said they were surprised that Holcomb did not reveal a plan to get money into teacher paychecks this year, especially since he is running for re-election.

Lanane said he doesn’t understand the delay, because lawmakers can open the budget and fund the proposal this year.

“The money is there to do something for teachers this year,” Lanane said.

House Speaker Brian Bosma said he thinks Holcomb’s plan is “sound fiscal policy,” but it will be up to the 2021 Indiana General Assembly to implement. Bosma is retiring at the end of the 2020 session.

The rest of Holcomb’s speech largely focused on priorities he outlined in his 2020 legislative agenda, including a proposal to pass a hands-free device driving law.

Holcomb said in his prepared remarks that distracted driving is one of the leading causes of death for teenagers in the U.S.

“This is unacceptable and avoidable,” Holcomb said.

House Bill 1070, authored by Republican Holli Sullivan from Evansville, would prohibit drivers from holding or using cell phones while driving, unless using hands-free or voice operated technology, like bluetooth.

But passage of that bill is no guarantee in the Republican-controlled Legislature.

Bosma said the bill is before the House Roads and Transportation Committee.

“We have some folks that are very supportive and we have some folks, on the more libertarian side, that perhaps think this is not how we should interfere in Hoosiers’ lives,” Bosma said. “I don’t know where were going to land on it yet.”

Some of Holcomb’s health care cost initiatives are more likely to pass, such as proposals to increase the smoking and vaping age to 21, create an all-payer claims database and end surprise billing.

“Because when you’re injured or ill, the last thing you need is a surprise when you get your medical bill,” Holcomb said.