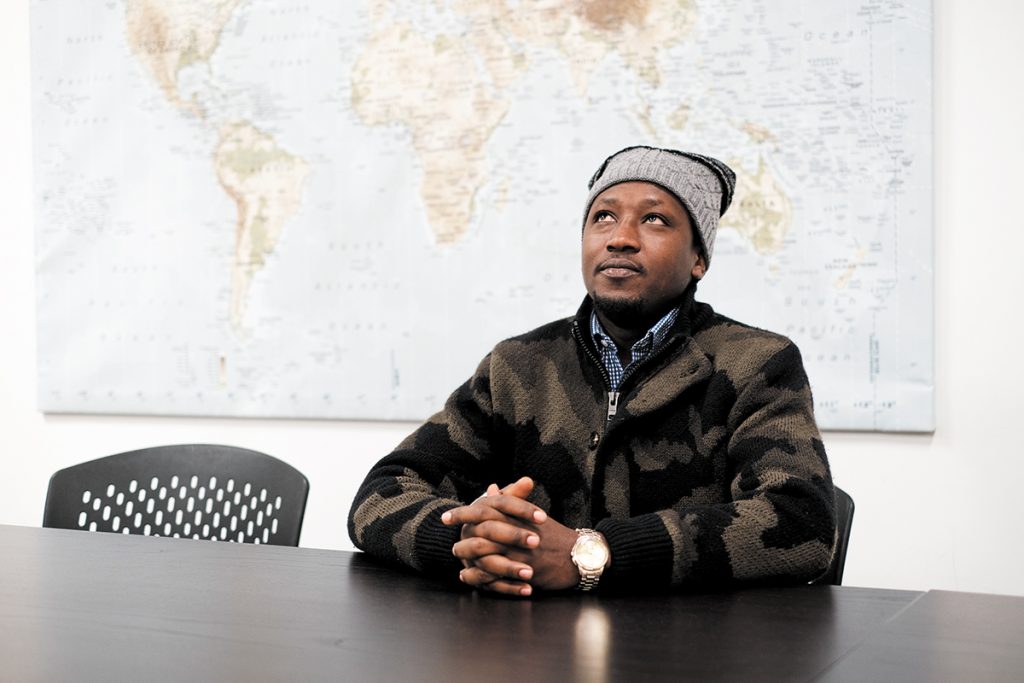 Jean Nsengiyunva, who escaped the Democratic Republic of the Congo as a child, has been trying for three years to gain refugee admittance for his wife and 3-year-old daughter. (IBJ photo/Eric Learned)

Gov. Eric Holcomb is giving the green light for federal officials to continue placing refugees in Indiana, following in the footsteps of a growing group of both Democratic and Republican governors who are opting in to the federal program.

The move comes after President Donald Trump issued an executive order in September that, for the first time, required states and local government to provide written consent to continue to receive even a handful of the 26 million refugees worldwide.

It’s part of the Trump administration’s larger effort to reduce refugee resettlement in the United States.

And even though the state has allowed refugees to resettle here for years, Holcomb’s decision was not considered a slam dunk—he’s a Republican in Vice President Mike Pence’s home state at a time immigration (which is different but related to refugee resettlement) is especially controversial. While governor, Pence tried to block federal officials from placing Syrian refugees in Indiana.

Holcomb “could have effectively vetoed refugees from coming to the state,” said Cole Varga, executive director of Exodus Refugee Immigration Inc., a group that helps bring refugees to Indiana and receives federal funding for its programs. Exodus is affiliated with Church World Service, which is one of nine national organizations that work directly with the federal government to settle refugees in the United States.

The initial deadline for submitting that consent was Dec. 25—90 days after the executive order was issued—but Varga said guidance from the State Department has indicated the deadline is now Jan. 21.

Holcomb sent a letter on Dec. 13 offering his consent.

“Our long tradition of welcoming and helping to resettle refugees with support from our federal partners, shows the world the compassion of Hoosiers and our willingness to give others the ability to grow and prosper in the great state of Indiana,” Holcomb wrote.

He is one of eight Republican governors who have given consent or said they will do so. Fifteen Democratic governors have taken similar action.

On Dec. 17, Indianapolis Mayor Joe Hogsett sent a letter with his consent, which was also needed for refugees to be allowed to continue coming to Marion County.

In other parts of the state, the responsibility is on county commissioners to offer consent. Varga said Exodus and the two other organizations in Indiana that help refugees once they arrive—Catholic Charities of Fort Wayne and Catholic Charities Indianapolis—are working to secure letters from other local governments.

Jenny Yang, vice president of advocacy and policy at World Relief, said her group targeted governors they believed might be on the fence about what to do and those in states that welcome large numbers of refugees.

Indiana has welcomed more than 11,600 refugees since 2011, and is home to the most Burmese refugees in this country.

Indiana took in nearly 1,900 refugees in 2016, just before Trump took office. It took in 865 last year and has placed just 116 this year. The steep drop has been the direct result of Trump’s efforts to cut back on the program.

Yang said she wasn’t necessarily surprised by Holcomb’s decision to continue to take in refugees, but she’s grateful he took that step.

“We wanted to make sure he was aware of how many churches and church leaders wanted to welcome refugees,” she said.

“I think that a good number of conservative individuals understand and believe that … they should help refugees,” he said. “But we’re also fearful about our safety.”

Immigration reform has been a top priority for Republicans as the Trump administration has pursued some controversial policies, like building a wall along the U.S. and Mexico border to prevent individuals from crossing it illegally.

Refugees, on the other hand, are individuals fleeing persecution for race, religion, nationality, political opinion or social group.

Holcomb stressed that point in his letter of support to Exodus.

“These are NOT illegal or unlawful immigrants but individuals who have gone through all the proper channels, were persecuted for their religious or political beliefs in their homeland and have sought and been granted refugee status in our nation of immigrants,” Holcomb wrote.

Downs said Holcomb can also make a compelling political argument for opting in Indiana, because he would not have wanted to be one of the only governors that didn’t do so. 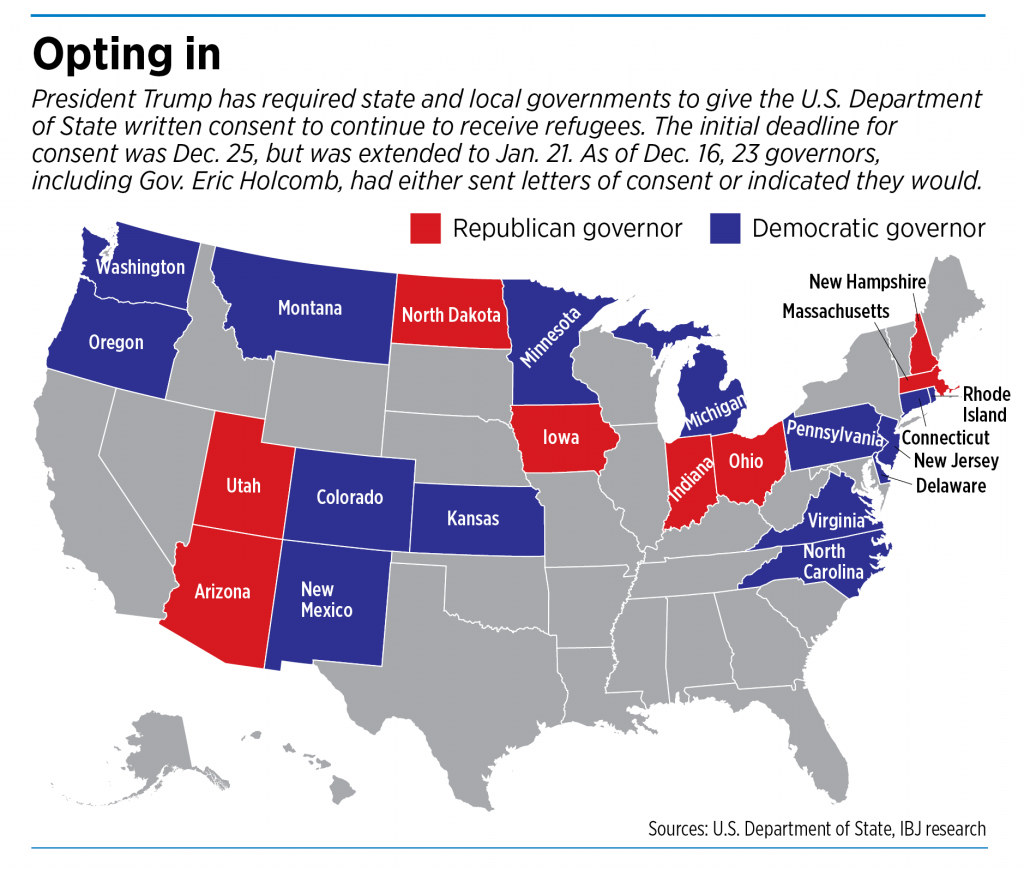 “Part of the beauty here is, this is a federal program,” Downs said. “If something goes wrong, he’ll be able to point at the feds.”

That doesn’t mean he won’t suffer at least a little political consequence from the far-right side of the Indiana Republican Party.

“But that’s a fraction of the party, and he’d only have to worry about that in the primary,” Downs said.

Republican Brian Roth has announced plans to challenge Holcomb in 2020, but Roth has to gather 4,500 signatures—500 from each of the state’s congressional districts—to even get on the ballot. Even if Roth meets that threshold, Holcomb is expected to easily survive the primary.

Downs said an issue like this could change the minds of some voters, but it’s likely most Republicans approve of Holcomb’s decisions on other topics, like spending or taxes.

“It could be that someone says, ‘Yeah, he got that wrong, but he got tax policy right,’” Downs said. “It’s just hard to imagine it being enough to energize anyone.”

Jean Nsengiyunva has been trying for three years to get his wife and daughter to Indianapolis. Without the written consent from Holcomb and Hogsett, that process would have essentially been stopped for the foreseeable future.

Nsengiyunva’s family fled the Democratic Republic of the Congo when he was 6 years old. He spent the next 20 years in a United Nations refugee camp in Uganda waiting to come to the United States and considered the camp home.

“We had lost hope of coming to the USA,” Nsengiyunva said.

Varga said refugees in the camps are often uncertain when they’ll be selected, but those who are the most vulnerable or who already have family members or other connections to the United States are usually priorities.

In 2014, Nsengiyunva finally started the interview process to come to the United States after 18 years in Uganda. It took two years to complete all the necessary paperwork, interviews, and background and medical checks, but in 2016, he made it to Indianapolis—a place he had never heard of before. 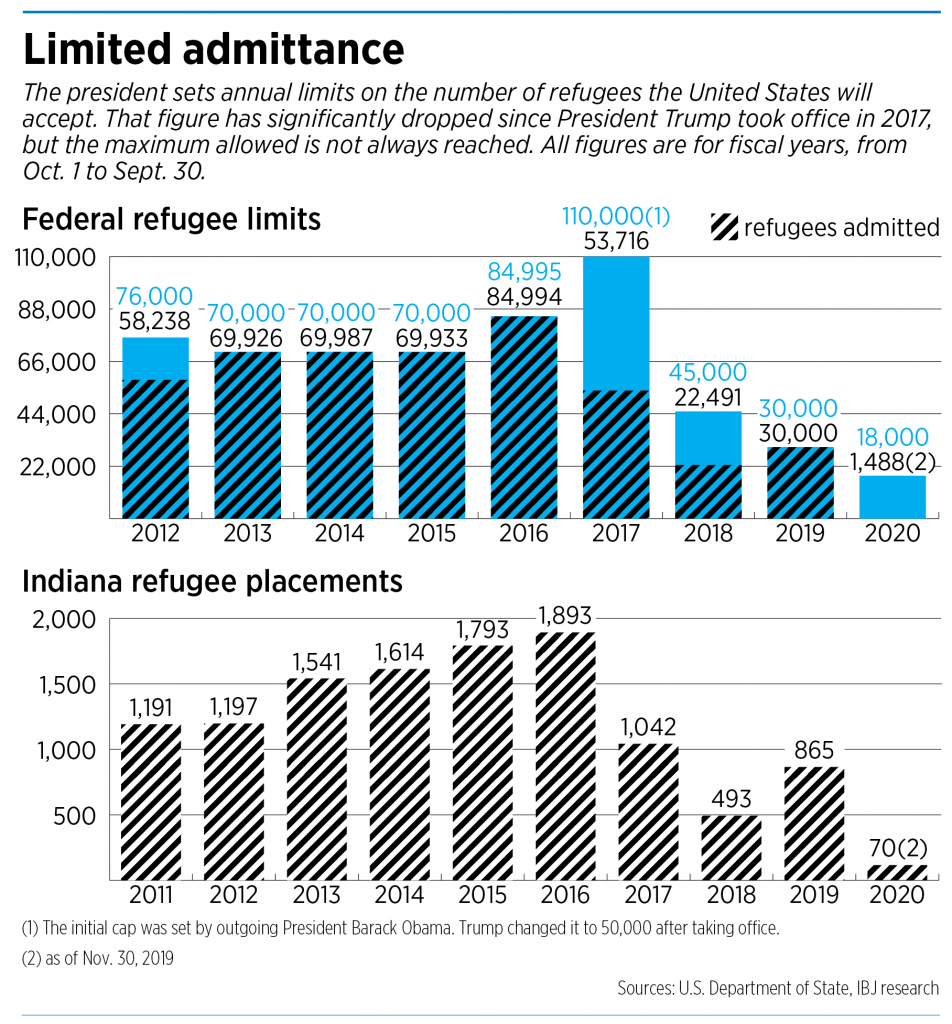 During that two-year period, Nsengiyunva met his future wife. He tried to add her to his case, but that would have essentially restarted the process. The couple made the decision that Nsengiyunva should go without her, believing it wouldn’t take as long for her to get through the system.

The federal government limits the number of people who can come into the country through the refugee process, and that number can change annually.

Trump has since significantly slashed the program. For fiscal 2020, Trump has set a limit of 18,000 refugees—an all-time low for the program. That greatly narrows the chances that Nsengiyunva will be able to bring his family here.

“We didn’t know things were going to change,” he said.

Critics of Trump’s executive order have argued it’s another way his administration is trying to limit access to the United States for people from other countries. But the White House says the order makes sure refugees aren’t being placed in communities that would be unwelcoming.

The months following the executive order have been full of uncertainty for the organizations, like Exodus, that work to place refugees. Varga said that details—such as how to actually submit consent letters, who has the authority to issue the consent at the local-government level, and who is responsible for getting these letters to the State Department—have all changed at least once.

In addition, a federal lawsuit challenging the executive order is pending, and a judge could rule before the Jan. 21 deadline to at least temporarily block it from taking effect.

Yang said Holcomb’s decision helps send a strong message to the Trump administration that, “regardless of what party you’re from or political spectrum you’re on, this is something most Americans support.”

“It just makes sense to welcome, to open our doors to people,” he said. “We’re helping make Indianapolis more diverse and interesting, in addition to helping people.”

Varga also said refugees are helping with the state’s workforce shortage, because they’re filling jobs and contributing to the economy.

Nsengiyunva works full time at a Nike warehouse in Lebanon, and lives in an apartment with his mother, father and brother, who joined him here shortly after he moved in 2016.

The New American Economy Research Fund estimated that Indiana would have lost $4.6 million annually in economic impact by not welcoming refugees.

Holcomb also referenced how refugees help the state’s economy in his letter of support.

“Developing a 21st century skilled and ready workforce is a high priority of our administration and we will welcome those who are ready to participate fully in our economy, showing civility and compassion to those who have suffered persecution,” Holcomb wrote.

Nsengiyunva is still hopeful that his wife and 3-year-old daughter can move here soon. His wife has started the interview process, but the limit of 18,000 refugees nationally could push back her timeline.

6 thoughts on “Holcomb opts in to accepting refugees”