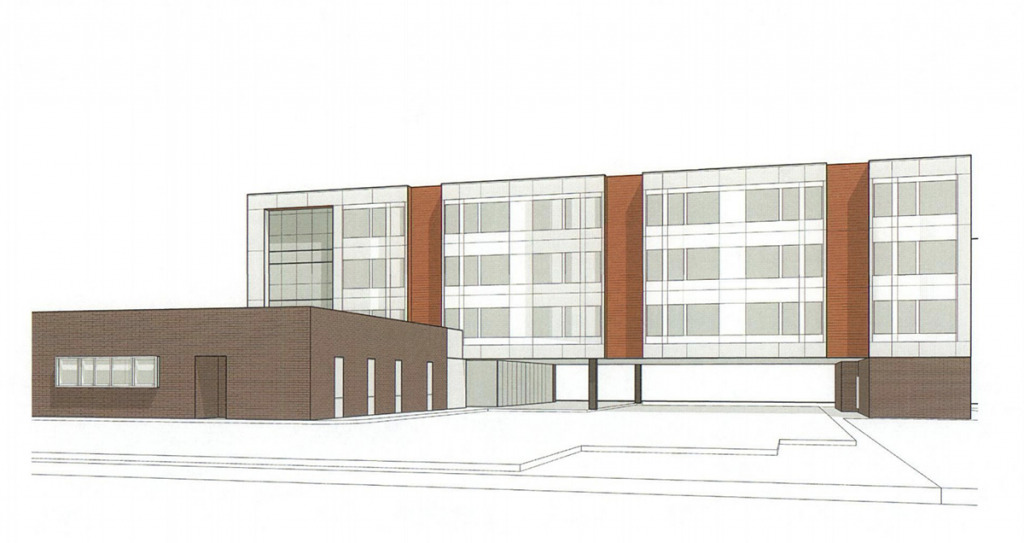 A rendering of the Compass project at 1133 E. Washington St. (Image courtesy of the city of Indianapolis)

Two Indianapolis not-for-profits are teaming with a local development firm to build a mixed-use project on the eastern edge of downtown with housing and services for people experiencing homelessness.

The four-story development will also feature office space for Horizon House, which is located adjacent to the Compass site at 1033 E. Washington St. and has provided services for homeless individuals since 1990.

According to a filing with the city’s Department of Metropolitan Development, each of the 36 one-bedroom apartments would be about 515 square feet and fully furnished. The apartments would be on the upper three floors of the building, while the first level would feature amenities for the residents, including a large community room, a covered porch and a meeting room.

About 5,300 square feet office space is also expected to be part of Compass as part of one-story annex fronting East Washington Street. The annex would feature a rooftop amenity for tenants in the housing development. A 29-space parking lot would be developed to the rear of the project.

The office space would be used by Horizon House’s 13-person housing program team, which was formed in 2018 and has helped house 124 households and 201 individuals with permanent housing challenges.

In a development plan, Horizon House said Compass is intended to be a permanent residence for individuals struggling with homelessness, and is a “direct response” to the city’s ongoing homelessness issues.

“We have really embraced the permanent supportive housing program and developed best practices here within our city,” said Marcie Luhigo, director of development and communications for Horizon House. “For us, the next step was to enter into a project where we were actively participating in solving the housing crisis.”

Luhigo said Horizon House has a 98% success rate for its housing placements in its first two years, but that finding permanent housing is often a challenge.

“It’s really awesome for us that there will be these additional units and we’ll be able to directly work with (homeless) individuals by having staff housed within the building, and it’s right next to the rest of the services that Horizon House provides,” she said.

Compass is expected to have three full-time staff members, including two provided by Horizon House to provide tenants with supportive services. Englewood Community Development Corp. would be the property manager, while Gratus has been retained as the site’s developer.

In addition to helping with the city’s homelessness issue, Compass is intended to create more sustainable and transit-friendly development in the East Washington Street corridor, according to filings with the city.

On Aug. 5, the city’s Metropolitan Development Commission is expected to consider a request to rezone the property from the C-5 commercial district designation to D-P for a planned development. In addition to the intended uses for the property, the rezone would also allow for a school or community center, as well as accessory uses like a community garden and outdoor recreation.

City staff recommends approval of the rezoning request, provided the surface parking lot does not exceed 27 parking spaces, the project sticks to the designs provided to the city, and the development group constructs a sidewalk connecting the proposed parking lot to a lot directly west.

A Horizon House representative on Tuesday could not immediately provide a figure for the cost of the project, but it is expected to be funded primarily by equity generated from the sale of Low Income Housing Tax Credits provided by the Indiana Housing and Community Development Authority.

The development group also plans to use HOME and Housing Trust Fund dollars from the IHCDA, while committing to not requesting any funding assistance from the city.

Indianapolis-based One 10 Studio is the designer on the project.