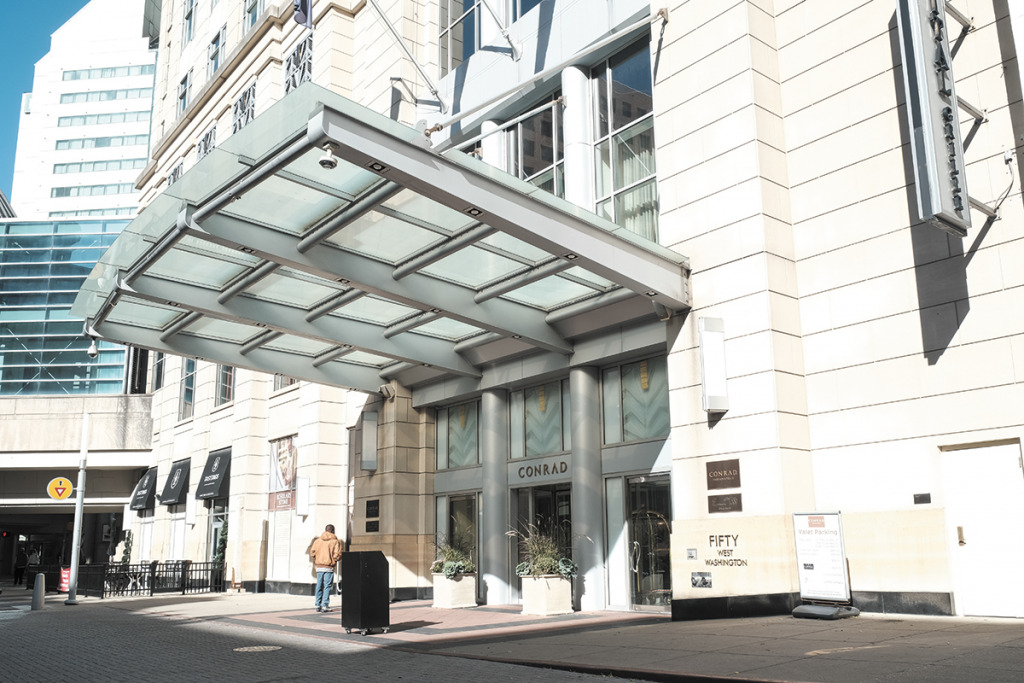 Indianapolis hotels have taken drastic steps to survive the pandemic, including temporarily shutting down, skipping payments, and depleting cash reserves.

So far, those tactics have largely worked, allowing many hotels on the brink to take a step back and regroup.

But with travel and convention business continuing to stagnate and COVID-19 cases on a steep rise, many properties—including the Conrad Indianapolis—now find themselves scrambling for longer-term solutions and pleading for help from lenders as they stare down massive debt payments over the next few years.

Among the most pinched are those with loans in the form of commercial mortgage-backed securities, also known as CMBS. IBJ reviewed records for 34 properties with these loans—a financing method used by about 30% of U.S. hotels—based on public data through Oct. 15 from Bloomberg.

Of the 36 outstanding loans, 10 (including two from the Conrad) are already delinquent on payments, most by more than 30 days. By comparison, a similar IBJ analysis in May found only six loans behind on payments, none by more than a month.

If conditions don’t improve, the market could see additional delinquencies and even defaults. Average occupancies have been well below 50% for more than seven months in a market that last year averaged 70%. Daily rates and revenue per room have also dropped drastically.

“Clearly, the Indianapolis market has not seen any improvements, due to the fact that we’ve not been able to hold conventions in our city,” said Jim Dora Jr., president of Indianapolis-based hotelier General Hotels Corp. “That makes it very tough to survive for any kind of business and … when you don’t have people [renting rooms], it makes it extremely difficult for properties like ours.”

An IBJ analysis found at least 22 of the city’s CMBS-backed hotels could experience revenue losses dramatic enough to default on their loans or put the properties in a spot where paying the bills becomes extremely difficult.

The newspaper determined at-risk properties by evaluating the debt service coverage ratio for each loan—a figure that indicates whether a hotel has enough net operating income to meet its debt obligations. Typically, a ratio of 1 means a property has enough cash flow to break even when accounting for debt service.

For the analysis, the ratio was slashed by half, representing a cut to half of a property’s net operating income. The assessment used available financial data for 30 loans; information for the remaining six was not available.

Even without slashing income, 14 properties already have a ratio below 1, based on financials for most through the end of June—a few months into the pandemic.

A similar IBJ analysis in May also found 22 properties were at risk, although that list included the Conrad, Hyatt Regency and downtown Fairfield Inn properties as being in peril, none of which were included in this examination due to a lack of updated property-specific data.

Since March, 16 loans have been added to an industry watchlist, indicating that lenders think those properties could be at risk of default. The hotels join another five that were already on the watchlist before the pandemic. 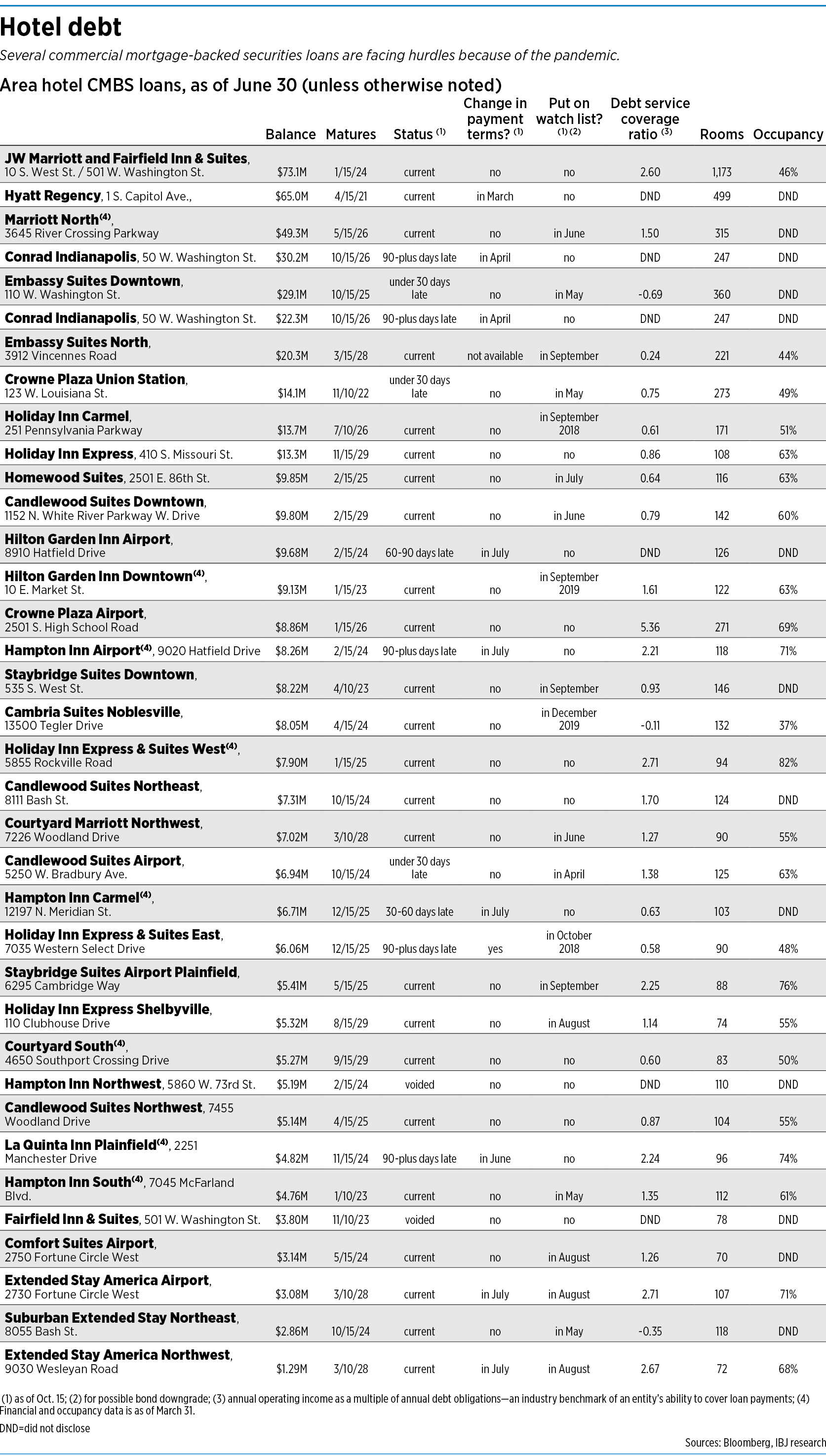 Dora’s General Hotels owns several properties in Indianapolis, including the Crowne Plaza locations at the airport and downtown—both of which are backed by CMBS loans. Dora said the company is working with its lenders for relief for those properties and others in its portfolio, but that has so far been challenging.

The Crowne Plaza at Union Station is listed as having missed its September payment, and has a ratio of 0.78, while the airport hotel is current on its payments and is outperforming most every other CMBS hotel, with a ratio 5.36.

Dora said contracts with the state, and now the city, for rooms at the airport location have helped it keep its occupancy—and revenue—fairly stable. Those rooms are generally used as overflow for COVID-19 patients and homeless individuals.

But he added that hotels across the city, including his own, are likely to face big challenges in the months ahead and that most won’t be able to rehire many laid-off or furloughed employees. General Hotels is running at “absolute minimum staffing” at all properties, he said.

“It continues to be a tough time in our business,” Dora said. “We have to get back to work or our people will continue to be really, really hurt. Lots of opportunities have been [lost] this year because of COVID. And hopefully, we can get things started again and get doors to those opportunities back open.”

Several hotels have had to burn through reserves to either make debt payments or simply keep their doors open, IBJ research shows.

For example, the JW Marriott had $18 million in its loan reserve (a repository that acts as a rainy-day fund and is intended to help the hotel meet future debt obligations) at the start of 2020. Now, that fund is below $1.1 million.

In fact, a majority of the hotels with outstanding debt don’t have enough in their dedicated reserves to make payments for more than a year, and some have been actively depleting those funds to cover operational expenses.

Still, some, like the airport Crowne Plaza, can afford to make payments for several years at their current reserve burn rate, while a handful of others can dip into reserves for anywhere from one to three years.

At least four local CMBS properties are listed as being in non-cashflow mode, which indicates their lenders are aware they aren’t bringing in enough money to make debt payments.

Doug McCoy, the Al and Shary Oak director of real estate at Indiana University, said hotels will likely face massive financial hurdles for the next few years as they claw their way back into the black and most CMBS properties will see negative cash flow through next year.

But he said the long-term outlook for hotel properties isn’t as bleak as numbers might suggest, although some hotels might change hands due to foreclosure or because their owners no longer have an interest in holding onto the property.

“There’s a good chance that a lot of these will survive one way or the other, whether it’s with a new owner, refinance or stimulus; really, probably some combination of all those different levers will get us through this,” he said. “We have to manage ourselves the best we can through this, coming back from the pandemic.”

Nine hotels have already secured aid from their CMBS lender in the form of special servicing, which often changes the parameters by which debt is collected. Nearly one dozen others have inquired about similar help.

Patrick Tamm, president of the Indiana Restaurant and Lodging Association, said he expects banks will look to make plays on properties where they’ll be able to recover most of their investment, if current owners aren’t able to pay the bills—repossessing the property and selling it to another owner.

“We’re very concerned,” he said. “We think we’re going to have a lot of attractive properties that will get foreclosed on, and the banks will take that in a pretty good equity position, and sell them and engage [the new owners] when business comes back.”

Tamm said the lobbying group would like to see industry-specific language in future coronavirus-related legislation that allows owners to meet debt obligations and hold onto their hotels.

For most hoteliers, general expenses don’t seem to be a concern, as most have enough revenue to keep the lights on and the rooms clean—at least at minimal staffing levels. But throw mortgage payments into the equation and the situation becomes challenging, said Bharat Patel, CEO of Sun Development & Management Corp.

Patel’s company owns several Indianapolis hotels, albeit only one with a CMBS-type loan. That property, the Holiday Inn Express & Suites on the east side, has not made its $34,500 monthly payment since April, as Sun officials work with the lender to secure special servicing or other relief.

He said it’s “very well known” that hotels and restaurants are all operating far below normal levels and unable to make their debt payments—some shutting down as a result. But because of the way CMBS loans are handled, “the process for receiving relief is far more challenging” during the pandemic, Patel said.

He said the lack of flexibility with property taxes is creating additional problems, because they come due in a lump sum rather than on payment plans.

Even more challenging, many owners who have started dipping into their reserves face massive balloon payments on their properties in the next several years. About 26 of the properties are funded through ballooned amortizing loans, all of which are expected to mature by the end of the decade.

The Hyatt Regency, which does not list its financial data, has its loan coming due in April 2021. So far, its owner, Columbia Sussex, has made no interest payments nor paid down any part of its loan, according to Bloomberg data.

Sources told IBJ the Cincinnati-area property owner has essentially walked away from the hotel due to continued financial challenges, leaving it in a precarious spot. Calls to Columbia Sussex were not returned, and the hotel’s manager could not be reached directly.

Only a handful of other hotels have loans that will come due by the end of 2023, but experts say those properties could face challenges.

“Our need for debt servicing has never been greater, because we don’t know what type of business we’re going to have on a daily basis,” Tamm said. “We’re in budget season for next year and most hotels are not banking on any group or convention business. That’s pretty painful.”•

One thought on “Hotels’ vacancy woes cause debt headaches”