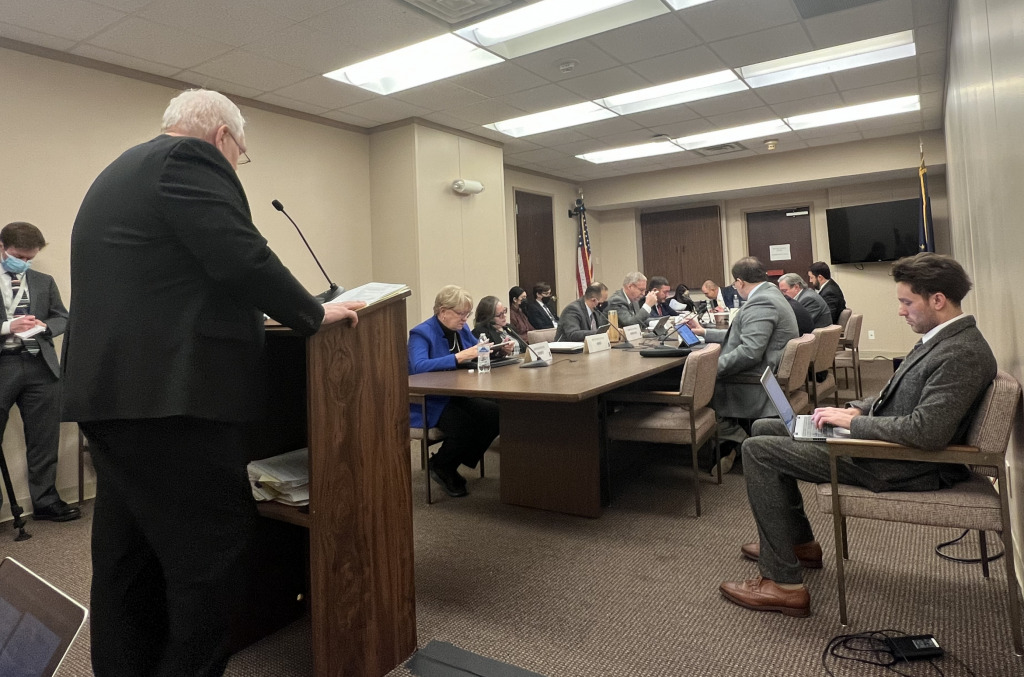 The House Employment, Labor and Pensions Committee passed House Bill 1001 to move it to the full House for consideration (IBJ photo/Emily Ketterer)

The Indiana House Employment, Labor and Pensions Committee on Thursday passed a controversial bill that would restrict employer COVID-19 vaccine mandates by a vote of 7-4, moving the bill forward to the full House for what is expected to be a quick passage next week.

The vaccine-mandate provisions of the bill would effectively force employers to accept any medical or religious reason to exempt employees from getting a vaccine, without question.

The vote was mostly along party lines, with Rep. Cindy Ziemke, R-Batesville, joining Democrats in voting against the bill.

The committee approved an amendment authored by the bill sponsor Rep. Matt Lehman, R-Berne. Lehman said the 16-page amendment addresses some concerns brought up during 14 hours of public testimony and adds a penalty to employers who reject medical or religious exemptions.

The amendment would allow employees who are denied exemptions and fired to be able to draw unemployment at the expense of the employer. Lehman said there was concern that employers would claim that employees who refused to get vaccinated were leaving by choice, making them ineligible for unemployment.

Rep. Dan Leonard, R-Huntington, said he would prefer using a different form of penalty because all employers pay differently into the unemployment system. He said some employers already pay the highest rate for unemployment, meaning they might not be penalized with the provision, while others who pay less would. He supported the overall amendment, but wanted to work on the penalty provision.

“I think the penalty of this is just kind of rushed into. I don’t think it’s well thought out. I don’t think this is the way we want to do it,” Leonard said.

The amendment also added language to allow employers who require COVID-19 testing as an alternative to getting the vaccine to get reimbursed by the state for the cost of testing, which must be done at no cost to the employee. Reimbursements would be managed by the Department of Workforce Development, which would have to come up with a system to disperse them. The cost would come out of state or federal pandemic dollars set aside for COVID-19 testing, and each test cost should not exceed $50.

It would also not allow employees who live out of state or employers with federal contracts to be eligible for the exemption requirements in the bill.  It would additionally allow for temporary medical licensing to retired or inactive emergency medical services personnel, retired or inactive health care professionals, out-of-state health care professionals, or recent graduate students in the medical field.

HB 1001 will move to the House floor next week for consideration. House Republicans have prioritized a speedy passage of their version of the bill, while the Senate has their own plan for legislation to address ending the public health emergency.

Senate Bill 3 mirrors the first half of HB 1001 by creating administrative tools to ensure Indiana can end the public emergency and continue receiving the same federal reimbursements for SNAP and Medicaid, and maintain the state’s ability to hold voluntary community vaccination clinics. Vaccine mandate language is absent from the bill.

Lehman said that he thinks the state of emergency and vaccine mandates should be addressed in the same legislation.