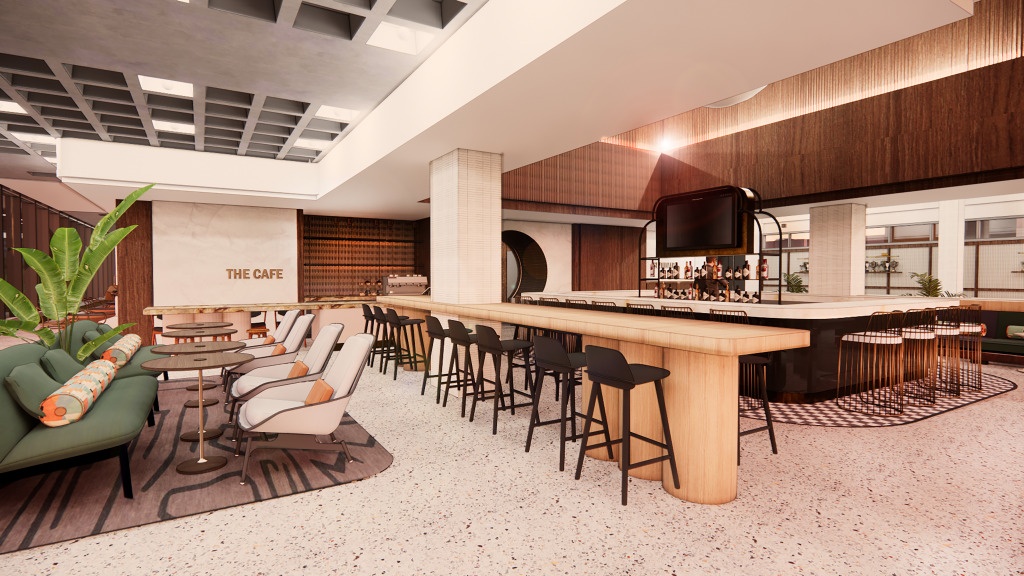 A new restaurant in downtown Indianapolis will bear the name of a legendary Indiana business family when it opens later this year.

The Hulman, which will feature a traditional American menu with dishes ranging from sandwiches and salads to steaks and seafood, is set to open in October at 141 E. Washington St. as part of the new Hotel Indy.

The restaurant name honors Anton “Tony” Hulman Jr., who purchased Indianapolis Motor Speedway in 1945 to prevent the track from closing, with his family maintaining ownership of the property until it was sold to Roger Penske in 2020.

The restaurant—and the 90-room boutique hotel—will feature homages to the Hulman family and a variety of Indianapolis-area celebrities. It will also have a private dining room called 1945 and an outdoor courtyard and dining area called The Paddock.

The Hulman restaurant is the result of a partnership with the IMS Museum, which holds rights to Tony Hulman’s name and likeness and is permitted by the family to license the name for what it considers appropriate uses. Financial terms were not disclosed.

Jocelyn Kraus, general manager for Hotel Indy, said this is the first partnership of its kind for the Hulman family—something she considers an honor.

The full menu for The Hulman has not been finalized yet, said Kraus, but it is expected to be rotated on a seasonal basis and feature locally sourced ingredients.

The $35 million hotel bears a Tribute by Marriott flag, and will feature high-end amenities. Indianapolis icons like Major Taylor, Steve McQueen and Madam C.J. Walker will be showcased throughout the hotel, along with the city’s arts, culture and sports scenes.

As part of its Hulman partnership, Hotel Indy is also being given the designation of the “preferred hotel” of IMS Museum.

“This partnership with Hotel Indy presents an incredible opportunity to honor and share Tony’s legacy as a man dedicated to hospitality, who elevated the city of Indianapolis on the global stage,” IMS Museum President Joe Hale said in written remarks. “We’re excited to provide a visually unique experience at The Hulman. For the IMS Museum, it’s an important step in sharing our story on a broader scale as we work to be a more inclusive, state-of-the-art community asset.”

In written remarks, the Hulman family said it is supportive of the hotel’s decision to use its name, adding they also are hopeful guests also remember family matriarch Mary Fendrich Hulman as part of the experience.

“Among many other important values, they instilled in us the importance of first-class hospitality and creating a welcoming environment, and we believe Hotel Indy officials are creating a venue that mirrors this,” the family’s statement said. “We’re pleased and honored that, in partnership with the IMS Museum, Hotel Indy wishes to pay tribute to our family with The Hulman.”

KennMar LLC is the developer of the hotel, and the property is managed by Coury Hospitality—the same management firm as the Hotel Carmichael in Carmel.

The property is also expected to feature a glass-enclosed rooftop bar called The Canon Ball Lounge, named after Erwin “Cannon Ball” Baker, who won the first motorized race at IMS in 1909. It also includes Brandon Coffee Bar, which will serve brews from Indianapolis’ Tinker Coffee Co.