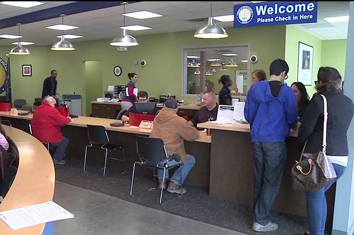 Some Hoosiers are pleading with the Indiana Bureau of Motor Vehicles to keep local branches open as the agency debates additional closures and pushes for more digital service transactions.

The Indiana BMV has completely closed eight branches around the state since 2019, according to agency data. More than a dozen other locations have additionally downsized or relocated.

Indiana BMV Commissioner Joe Hoage on Wednesday told legislators that staffing challenges and decreased foot traffic within certain branches has caused most of the recent closures. He added that the agency is encouraging more Hoosiers to conduct BMV business online or at digital kiosks.

But an Indiana Capital Chronicle review of dozens of public comments submitted by those who live in communities with pending shutdowns show that local residents believe their branches are a vital and necessary resource.

Hoage announced last week the latest BMV branch closure in Nappanee. The location will cease operations Oct. 28. The BMV will instead install a kiosk in the city, which lets residents complete most common transactions on their own.

The decision was made even after dozens of people from Nappanee and surrounding communities submitted written testimony and showed up at a public hearing to oppose the closure. Many expressed concerns about the impact on the Amish community there, citing the increased distance to be traveled by those without cars to the next nearest BMV branch.

Hoage said in a statement following the closure that “it is never easy for us to make the choice to close a branch.”

“However, as Hoosiers choose to conduct their transactions online and at kiosks more and more often, it is critical for the agency to respond and adapt to those trends,” he said.

Currently, the BMV operates 124 branches statewide. The agency is required by Indiana law to operate at least one branch in each of the state’s 92 counties.

BMV spokesperson Melissa Hook said the agency conducts regular assessments of transaction activity “to make sure we are most effectively using state resources.” She noted that those assessments can prompt a review of whether a branch should remain open or have an adjustment in its operating hours.

The agency’s process to determine whether a branch should be closed requires BMV staff to collect and analyze data to determine who uses the branch and how, in addition to a review of the fiscal effects of the closure.

“When we identify branches that we think are not being used as often, the first thing we look at is the data,” Hoage told lawmakers Wednesday during an interim study committee meeting. “Then we look at the money, and then I go have a conversation with those constituents in that community.”

Sometimes, those public hearings can stave off a closure.

After nearly 40 people in Alexandria attended a hearing in August to push back against the potential closure — including multiple local and state officials — Hoage said the agency decided to keep the branch open, for now.

“We saw very good turnout from the public,” he said. “Basically, I said we’re not going to close the branch, but we’re going to continue to monitor these transactions over the course of the next two years.”

But if those transactions continue to go down, the commissioner said the branch could still be shuttered by 2024.

If the Alexandria branch is closed, only the Anderson branch will remain in Madison County — the 13th largest population in the state.

Thirteen other branches have relocated since 2019. BMV officials said the moves happen “frequently” to add space or move to buildings better equipped to meet the needs of a particular community.

A recent Indiana Capital Chronicle analysis found that the BMV shed employees during the pandemic, but its losses were part of a larger trend dating back to December 2018, when the number of employees peaked at about 1,600 — compared to a low of about 1,350 in September 2021.

At that time, about 10% of Indiana’s BMV branches were closed for more than three weeks due to staffing shortages. Agency officials said that about 12% of all BMV branch jobs were not staffed on a daily basis as a result of vacant branches or because workers were out due to COVID-19 precautions.

“Attrition has occurred as part of the changes lowering overall headcount needs,” Hook said in a statement. “The BMV is at appropriate headcount to maintain operational need and customer satisfaction. In a customer service environment, there will always be turnover and as such there is always a need to recruit.”

With nearly half of all BMV transactions this year completed online, Hoage noted that fewer agency employees are needed inside branches.

He emphasized, too, that the 50 BMV kiosks located across Indiana allow Hoosiers to renew vehicle registrations and driver’s licenses, among other tasks. In 2021, almost 1.2 million of the BMV’s roughly 14 million transactions were completed at the kiosks. Hoage estimates that number to jump to 2 million annual kiosk transactions in the next two years.

“There’s always going to be a branch in every county, and there’s going to be counties where we need more branches than just one,” Hoage said. “The resources are following the customers’ ways of doing business with us.”