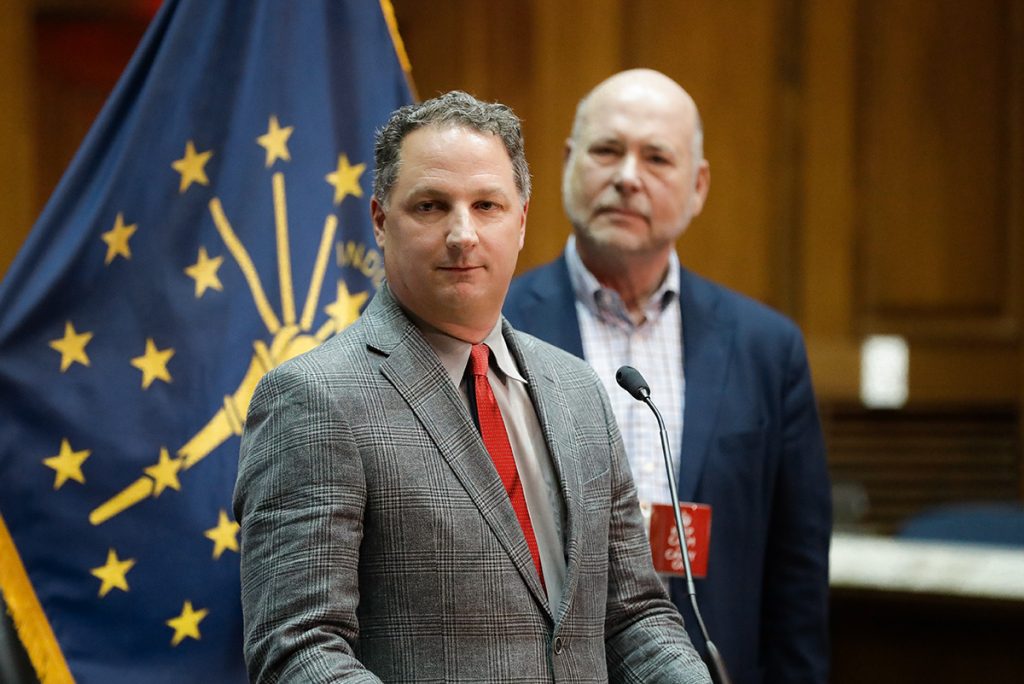 Rep. Todd Huston (left) is set to take over as speaker—replacing Rep. Brian Bosma of Indianapolis (right)—at the end of the 2020 session. (AP photo)

The top leadership position in the Indiana House changed hands Monday for the first time in a decade in an unusual transition just as this year’s legislative session is about to wrap up.

Longtime House Speaker Brian Bosma, R-Indianapolis, stepped down and was replaced by Rep. Todd Huston in the powerful post that largely controls which proposals are considered and appoints leaders of its some two dozen committees reviewing legislation.

Bosma and Huston have been close allies, with Huston serving last year as the top House budget negotiator. House Republicans made Huston their new speaker pick soon after Bosma announced in November that he wouldn’t seek reelection this year to extend his 34 years in the Legislature.

Bosma said the transition just before the legislative session adjourns this week avoids confusion over House leadership and gives Huston a few days “to get his feet wet.” No other House speaker changes stretching back several decades have been in mid-session and most have followed election outcomes changing which party controlled majorities.

Huston said Monday he would look to build on what he called state government’s good financial position.

“I want to make sure Indiana is a great economic environment for folks to earn higher wages, for companies to hire more people, for great teachers to succeed and for a strong educational system,” Huston told reporters.

Huston, 47, is from the Indianapolis suburb of Fishers and was first elected to the House in 2012. He was the state Republican Party treasurer and was chief of staff for former Indiana Superintendent of Public Instruction Tony Bennett before joining the Legislature.

Bosma is the longest-serving House speaker in state history with 12 years total in the position. He’s been the top House Republican as either speaker or minority leader since 2001. He was first speaker in 2005-2006, after which Democrats regained House control for four years, but Bosma returned to the top position for the 2011 session.

He also spearheaded the GOP push to make Indiana the first Midwestern state with a “right to work” law barring companies and unions from signing contracts that require employees to pay union fees. That bill prompted lengthy boycotts by Democratic lawmakers in 2011 and 2012 that ultimately failed as Republicans imposed $1,000-a-day fines against them.

Several lawmakers credited Bosma for taking the lead on many tough issues.

“In the history books, some of us will have a sentence, some will have a chapter. Speaker Bosma, I think you will have multiple chapters,” said House Majority Leader Matt Lehman, a Republican from Berne.

Bosma, 62, was first elected to the Legislature in 1986 from a suburban Indianapolis district, following his father who served in the Indiana House or Senate between 1963 and 1983. House Minority Leader Phil GiaQuinta, a Fort Wayne Democrat, jokingly blamed Bosma’s knee and hip replacements on walking the Statehouse’s marble floors for more than five decades.

Bosma told House members in his farewell remarks that they should be courageous because incremental change often doesn’t make a big enough difference.

“We each need to think a decade down the line,” Bosma said. “Figure out what we want and work every day to try to make that happen.”

Huston was Bennett’s chief of staff in 2009 and 2010 as the state schools superintendent worked with then-Gov. Mitch Daniels on contentious education overhaul plans, including launch of the nation’s broadest private school voucher program, a merit pay system for teachers and pushing for state takeover of public schools with records of low student scores on standardized exams.

Much of that agenda won legislative approval after Republicans regained House control with the 2010 election, and Bosma took over as speaker. But Bennett became a lightning rod for teacher anger and lost his 2012 reelection bid.

Huston took active role in education issues when he first joined the House, including sponsoring a bill to expand eligibility for the private school voucher program. But he soon moved to the budget-writing Ways and Means Committee and focused more on fiscal-related issues. Huston was the top House negotiator last year on the new two-year state budget.

Huston takes over GOP caucus leadership heading into the November 2020 election, when all 100 House seats will be on the ballot and Republicans will be seeking to retain the two-thirds supermajority they’ve held since the 2012 election that allows them to take action even without any Democrats present.