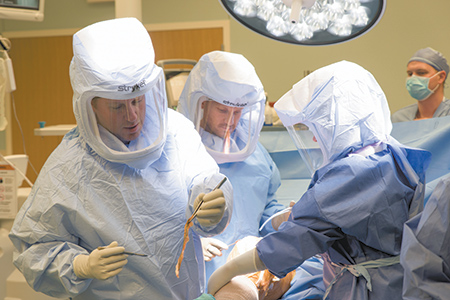 An Indiana Senate panel voted Wednesday to advance a bill that would prohibit non-compete agreements between physicians and their employers.

The bill was heavily supported by physicians and medical-consumer groups, who said that non-compete agreements hurt doctors and their patients, reduce access to medical care and interfere with the free flow of labor.

On the other side, hospitals and business groups opposed the bill, saying non-compete agreements are needed to help protect trade secrets and to provide a return on the money and time needed to attract and train doctors.

It’s the latest in a series of bills meant to address the high cost of health care in Indiana, as well as the physician shortage and patients’ rights.

Sen. Justin Busch, R-Fort Wayne, the bill’s author, said the measure would ease some of the pressures on Indiana’s health care system. He said 78 of the state’s 92 counties have a shortage of doctors.

“Ask yourself this question: Amid the shortage, can we afford to have physicians sitting on the sidelines, waiting out non-competes that can sometimes last more than a year?” Busch said.

Non-compete agreements prohibit physicians from practicing in a specific geographic area for a set amount of time after they leave a certain practice or group.

The Indiana State Medical Association, Hoosiers for Affordable Healthcare, the Employers Forum of Indiana, and several other groups supported the bill.

Dr. Pardeep Kumar, an internal medicine physician from Terre Haute, said non-compete agreements can interfere with patient care, because a doctor who wants to leave a practice or group must either stop practicing for a year or more or move to another community, sometimes out of state.

“Patients will lose their physicians because of non-compete clauses,” said Kumar, who is president of the Indiana State Medical Association. “This is especially true in communities with very few physicians or those communities near the state border.”

Dana Stutzman, a health-law attorney at Hall Render, representing the Indiana Hospital Association, said banning non-compete agreements could destabilize the health care system in Indiana. Hospitals in smaller communities, including critical-access hospitals, often spend money to attract doctors, and could lose physicians to employers that can pay more under a non-compete ban.

Ashton Eller, vice president of health care policy and employment policy at the Indiana Chamber, said non-compete agreements are a standard business practice across many industries to protect employers’ investments in attracting and training physicians, and equipping their clinics.

“The Chamber believes that non-competes are a reasonable tool for protecting this investment,” he said.