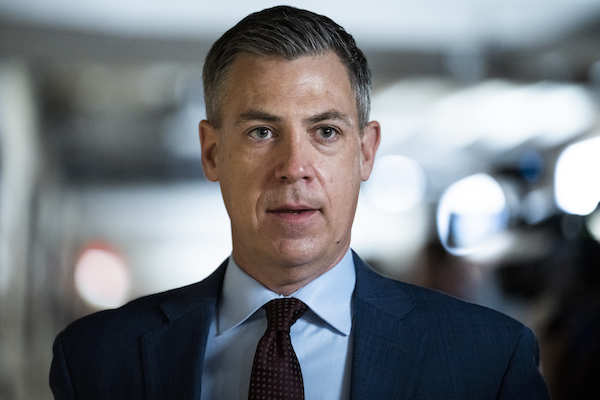 Northeast Indiana congressman Jim Banks jumped into the 2024 race for the U.S. Senate on Tuesday, becoming the first candidate in what is expected to be a crowded Republican field.

The conservative lawmaker is known for his fiery tweets and has served the Third District in the U.S. House since 2017. He just began his fourth term in office.

He used the word conservative 20 times in a 10-minute interview with Indiana Capital Chronicle. He dropped a video about his run Tuesday morning and plans to file today. In the video he says “only in America could a small town kid from a working class family do what I’ve been blessed to do.”

Banks grew up in Columbia City, the son of a factory worker and a nursing home cook. He was first in his family to go to college and met his wife while at Indiana University.

In Congress, he has focused on veterans issues — he served in Afghanistan for parts of 2014 and 2015 while in the state Senate — and holding China accountable. Just last week he launched an “anti-woke” caucus and has been on Fox News in recent days highlighting it.

Banks said the Senate would provide an opportunity to do even more on national security and defense issues he cares so much about.

“I think it was obvious to me after being in the House for a few terms is that there aren’t enough conservatives in the Senate. We saw the massive omnibus spending bill get passed in the Senate here recently with Republican support and that’s only paved the way for our $32 trillion national debt to grow even more. So, we need conservatives in the Senate who are going to fight back against the Democrats and the Biden agenda, not to go along with it,” he said.

“I’ve led the fight in Congress to hold China accountable for stealing our jobs and for giving us COVID,” he said in his video. He also invokes transgender girls athletics, abortion and critical race theory.

A Senate term is six years, rather than two, giving more breathing room between campaigns. But a Senate campaign will likely take millions to win.

In 2018, Braun spent $4.5 million in the GOP primary. According to Vox, altogether, the three candidates spent more than $9 million in one of the most expensive and negative primaries that year.

Open Secrets, which researches and tracks money in politics and its effect on elections and policy, found Banks’ top contributor from 2015 to 2022 was Club for Growth—$104,066.

Mark Lubbers, a personal adviser to Daniels and longtime friend, didn’t mince words about the ad and Banks.

“A majority of Americans are ready to embrace conservative policy … but loser grifters like Club for Growth keep making conservatism ugly and unlikable.  At some point genuine conservatives will have to go to war with these bully goons to save us from baby-Trumps like Jim Banks,” Lubbers said.

He said he heard Club for Growth plans to continue its investment in Banks, possibly reaching into the millions.

Banks sidestepped a question on Daniels but said he had called Donald Trump to tell him of his decision and he “would be very glad to have his support.” Banks has visited with Trump numerous times and his video includes two pictures with the former president.

“Hoosiers deserve to have another tried and true conservative in the Senate, and Jim Banks is by far the best person for the job. Jim and I are both veterans of the U.S. Navy Reserve, and we need Jim in the Senate to build a strong military that will defend the homeland and stand up to our adversaries like Communist China,” Bucshon said. “Jim isn’t afraid of the radical left and will fight to remove ‘woke’ training from the military that harms our readiness. Jim’s an unapologetic champion for conservative values, with a strong record of defending the unborn and protecting parents’ rights in education. I’m confident Jim will continue the fight for Hoosiers’ conservative values in the Senate, and he has my full support.”

Cotton said “we need more leaders like Jim Banks in the U.S. Senate — leaders with military experience who will defend our rights and our national security. For six years he’s been an indispensable partner in the House and I know he will be an even stronger partner in the Senate. Jim is a proven conservative fighter who puts Hoosiers first and I’m proud to endorse him.”

Banks previously served six years in the state Senate and hails from Columbia City. He and wife Amanda have three daughters.