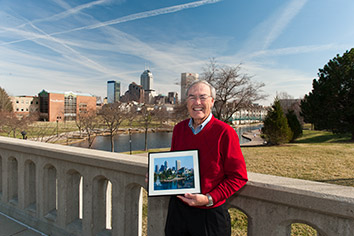 Attorney Rich Bell displays his Indianapolis skyline photo that has been used as the basis to sue hundreds of people who shared the photo online. (IBJ file photo)

A federal jury in Indianapolis ruled against an attorney photographer Tuesday who has sued hundreds of people for using his online photo of the city’s sunny skyline.

The verdict raised dark clouds over the presumption that the lawyer owns a legitimate, enforceable copyright of the photo.

Jurors ruled against attorney and photographer Richard Bell of Fishers, who sued Carmen Commercial Real Estate Services in 2016. The jury answered “no” to this decisive question: “Do you find that by a preponderance of the evidence that Richard N. Bell authored the Indianapolis Skyline Photo, that he owns a copyright in it, and that he registered it with the Copyright Office?”

The jury awarded Bell no damages, raising the likelihood that Indianapolis-based Carmen Commercial — and potentially other defendants — will move against Bell for attorney fees and costs incurred in defending lawsuits he filed against them.

“Because the jury found that Bell does not own the photo, this is finding is ‘res judicata.’ That means that all the other defendants that Bell has sued across the country should be able to use this jury finding to get their cases automatically decided their favor,” Overhauser said. “And since copyright suits are one of the few types where a ‘prevailing party’ can recover its attorney’s fees, Bell is likely to be ordered to pay the attorney’s fees for all of those defendants.”

Bell and his attorney, Maura Kennedy, did not immediately respond to a request for comment Wednesday.

Bell has sued hundreds of defendants over the years, although few cases have gone to court. In some of those cases that did proceed to court, Overhauser and other attorneys defending clients attacked the validity of Bell’s copyright. They have claimed, among other things, that when Bell snapped the photo from a bridge overlooking the Indianapolis canal, he did so while employed at his former law firm, Cohen & Malad. In such a case, they argued, the photo was a work for hire properly owned by his firm at the time, therefore nullifying his copyright that was obtained several years after the photo was taken. Bell has consistently defended the validity of his copyright.

Carmen Commercial president Christopher Carmen said in an interview Wednesday he was “very pleased by the outcome and pleased that it might help others going forward.”

Bell sued Carmen in 2016 after discovering that the company had used the photo on a blog post. Carmen, whose four-employee business represents clients looking to lease commercial or industrial property, said he had used the photo in a blog post he had written on economic development, contrasting Indianapolis and Chicago, where his company also has a presence.

Carmen said he researched the photo before using it and found no indication of copyright. He said his company has purchased rights to use copyrighted material in the past and would have done so in this case had he known the image was copyrighted.

He said the blog post and the image had been online for a couple of years before Bell approached him, demanding $5,000.

Carmen said he apologized to Bell, and he had the photo removed from the blog post immediately. “I was honest with him,” Carmen said, telling Bell that he didn’t realize the image was copyrighted, and he also offered to pay Bell $1,000 — double what Carmen said his company had ever paid to license copyrighted art.

“He rejected that and said he was going to sue me,” Carmen said. At that point, a litigation-averse defendant began investigating Bell and made the tough call to fight back after Bell filed papers.

“I know that it put me at greater risk by hiring an attorney and taking a run at it to defend myself, but I’ve always been of the mind that right is right and wrong is wrong,” Carmen said. “… I continue to believe the best way to protect yourself is to stay out of court altogether.”

But even in victory, the three-year legal odyssey had an impact, and Carmen said he wonders how many others — particularly other small business owners — have felt the same when faced with what many refer to as “copyright troll” litigation.

“I’m not spending full time on it, but it’s a continual interruption to the business,” he said. “It’s taking the number one resource — my time — out of the business from time to time. … And it’s just the emotional hassle of someone filing a suit against you, in particular when you know that the suit was baseless. Mr. Bell’s history kind of reinforced that feeling, that belief.”

Other factors also appeared to lead the jury to conclude they could not find Bell owned the photo or had a copyright — including close examination of the photo itself.

For example, Overhauser said Bell testified in a prior case that he took the photo, which shows an operating fountain in the canal, on March 8, 2000.

“A week or so before the trial, I tracked down the people that maintain the fountains in the Canal Walk – the Indianapolis Marion County Building Authority. They were able to supply me with page 11 from their ‘Canal Maintenance Specification.’ It confirmed that they do not turn on the Canal Walk fountains until April 1 of each year,” Overhauser said. “… So in the end, the water fountain proved fatal to Mr. Bell’s case.”

Carmen said the lush green trees and spring foliage depicted in the photo also threw shade on Bell’s claim of the photo’s origin.

“That’s not March in Indiana,” he said. “I’m not sure that’s March in South Florida.”