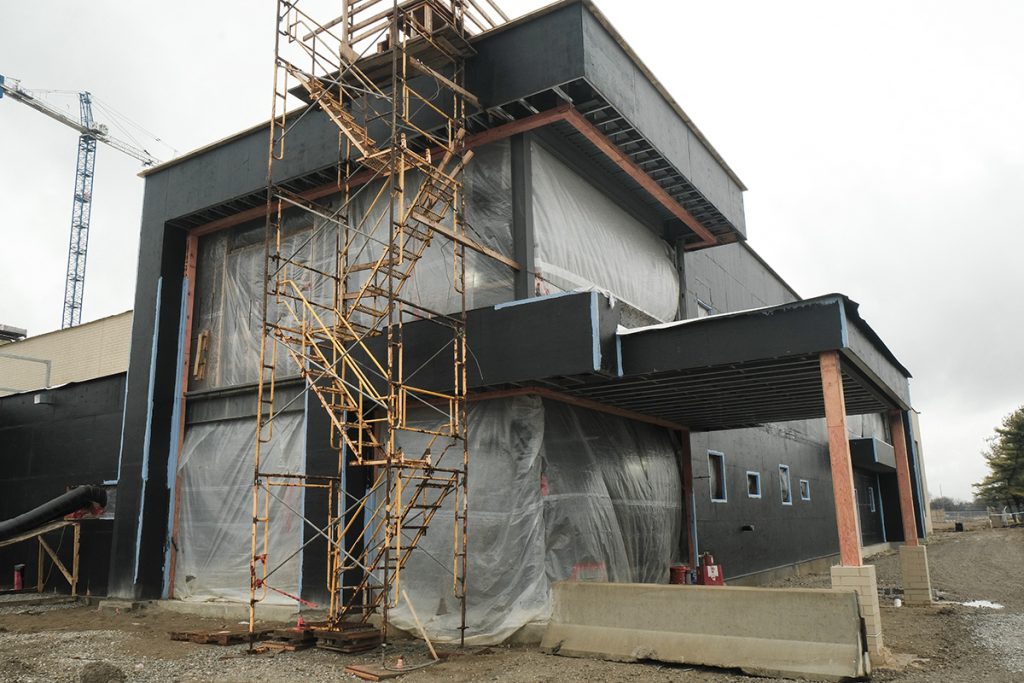 The Assessment and Intervention Center, which will serve people with addictions and mental health issues, is expected to open in late summer and will be the first building completed at the Criminal Justice Campus. (IBJ photo/Eric Learned)

City leaders can look southeast out the top floors of the City-County Building and see the Community Justice Campus taking shape in the Twin Aire neighborhood. Finally.

“It’s cool to see,” said Tim Moriarty, special counsel to the mayor. “To see where we’ve come from to where we are today.”

After years of planning, the city of Indianapolis officially broke ground on its $572 million criminal justice complex in July 2018 at the site of the former Citizens Energy coke plant along Southeastern Avenue. The campus is 140 acres and is expected to transform the Twin Aire neighborhood while revitalizing an old industrial site.

Today, officials are just six months from a tentative opening for the first piece of the project, the 37,000-square-foot Assessment and Intervention Center. Construction on other buildings in phase one is well underway, and the city has started planning for phases two and three.

City leaders expect the first phase—with nine buildings, including the assessment center, the adult detention center, the courthouse and the sheriff’s office, plus other professional buildings for departments related to or working closely with the criminal justice system—to be finished in 2022.

City leaders say the $10 million center, which will serve individuals suffering from mental health and addiction problems, is slated to open a few months ahead of schedule, sometime from July to September. 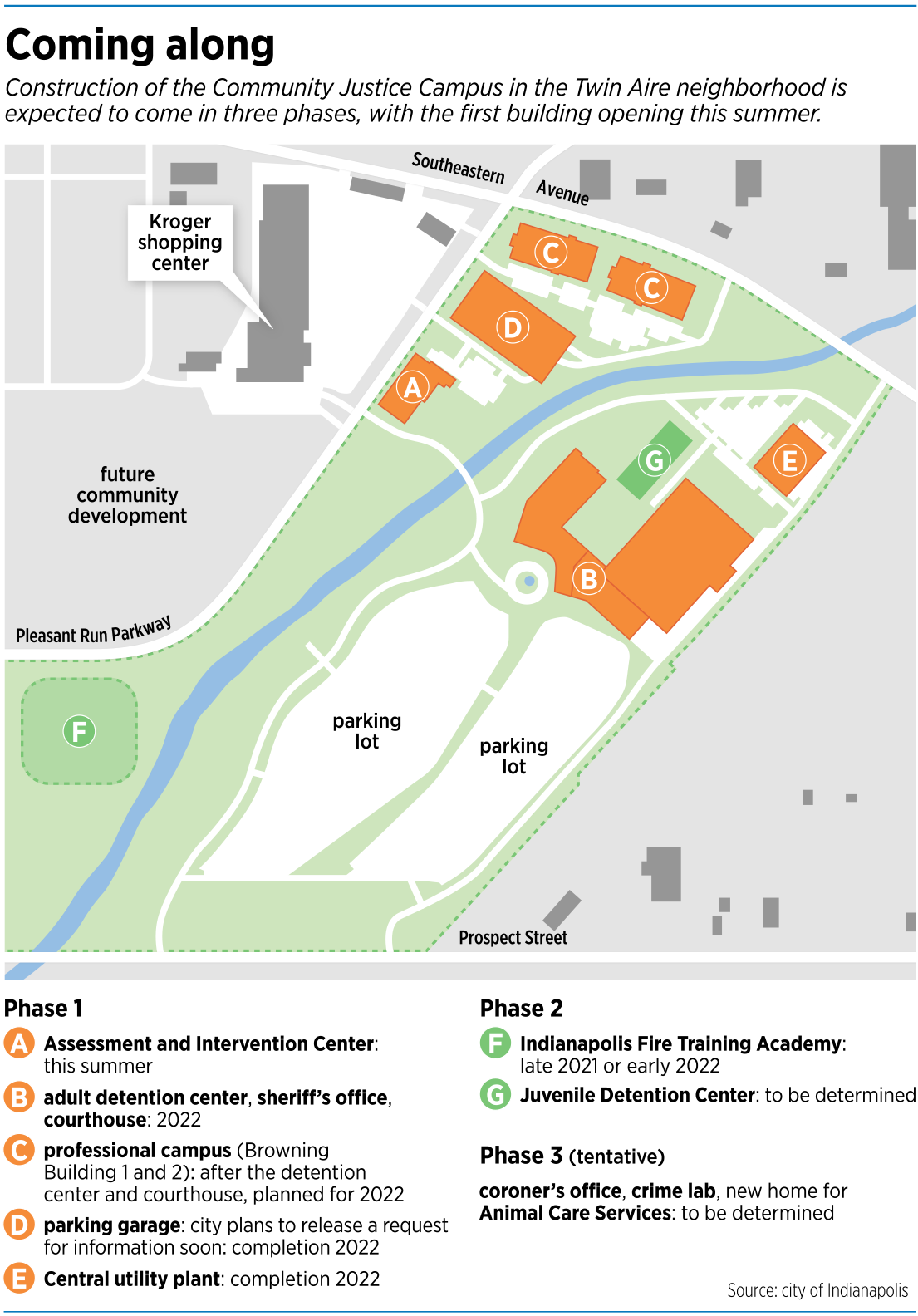 The Hogsett administration is describing the treatment center, to be operated by the Health & Hospital Corporation of Marion County, as the first of its kind in the state. It will offer more services and more space than is available now at the Reuben Engagement Center, which tries to keep people who are homeless and addicted out of jail.

Low-level, non-violent offenders struggling with addiction or mental illness will be sent to the new center—rather than to jail—as will some individuals who haven’t been arrested.

The goal is to keep folks who shouldn’t be in jail out of it, reducing recidivism and jail overcrowding in the process and addressing some of the causes of crime.

Moriarty told IBJ the city wanted at least a full year to get the diversion program right, through trial and error, before opening the jail and courthouse.

The center will be large enough to serve 60 people at once and aims to move folks through its services within 72 hours.

One portion of the building will remain empty when the assessment and intervention center opens. Called the innovation space, the city has purposely left that area in shell form to later be used as needed, whether as a clinic or for more beds.

In addition to a diversion center, the building is also expected to include an ambulance bay that will result in improved service to the near-southeast side.

“This facility includes multi-disciplines. It’s so much more than what we’re currently doing at the Reuben Engagement Center,” said Paul Babcock, director of the Office of Public Health and Safety. “We learned a lot of lessons from there; we’re transforming some of those operations, but we’re really trying to expand and enhance.”

Since the justice center’s groundbreaking, the city has added plans to build a fire training center in the southwest corner of the site, south of Pleasant Run Parkway and west of Pleasant Run Creek.

The center will give the Indianapolis Fire Department, the state’s largest fire department, its own training facility for the first time in decades.

The $15 million project is expected to significantly cut travel time for department recruits and firefighters who currently drive to the Emergency Service Education Center on High School Road on the west side or drive out of Marion County to use other departments’ training facilities.

The Indianapolis Fire Department Training Academy will include a two-story building for offices and classrooms, a fitness room, a kitchen and more. It will also include a three-story live burn structure and a fire training tower, and a driving course for firefighters to practice driving firetrucks and other fire vehicles.

“We rely heavily on neighboring departments to give us access to their training facilities,” IFD Training Chief Eric Dreiman said. “We have 56 recruits in our current class. For them to travel from downtown out to the facility out on High School Road, it eats up a better part of half a day in moving all of them, their equipment, all their other stuff they need for the training itself.”

Construction of the facility is expected to begin by July, with an opening by late 2021 or early 2022.

For now, concrete and steel are rising from the site of the jail and sheriff’s department (under construction by Smoot and AECOM-Hunt) and the courthouse (Wilhelm Construction). The city is preparing to issue a site completion bid package, which will deal with trees, the parking lot, a trail and more.

“What they told us at the outset of the project is, once your foundations are in, when you start going up, the project becomes less complex and much more predictable,” Moriarty said. “We’re past that stage now. That’s why we make the point of saying, ‘If you want to know how it’s going, just look.’”

The city is also working on infrastructure bid packages to be issued soon that will address traffic concerns on Southeastern Avenue, Pleasant Run Parkway and an intersection known as “dysfunction junction,” where Southeastern, Rural Street and English Avenue all merge.

Next comes plans for phase two, which will include the fire training center and the juvenile detention center.

The mayor said last week he’ll form a juvenile justice reform effort similar to the adult criminal justice reform that came before plans for the new jail. Consideration of policy changes and system improvements will work in conjunction with building design, Moriarty said. “We’re already working through the needs, the programming, things like that,” he said.

The city also will soon release a request for information on the campus’ parking, which includes a parking garage.

Then attention will turn to a piece of land between Hoyt Avenue and Pleasant Run Parkway that has been reserved for significant community development. That process will be public, and the city will work with the Twin Aire neighborhood on plans for the site.

Moriarty said that work will be vital and is something everyone is looking forward to. It will start soon and will happen concurrently with completion of phases one and two, he said.

Two tracts of land south of Prospect Street might also be redeveloped as part of the campus. Phase three could potentially include new facilities for the coroner’s office, crime lab, and animal care and control, which are desperately needed.

It makes sense to have the coroner and crime lab near the site, he said, but those plans are preliminary.

“It’s an awesome site. We made the right decision to buy all 140 acres from Citizens,” Babcock said. “It’s been the mayor’s mantra from Day 1 to think big. Our goal is to really be able to transform from not only a criminal justice reform issue but really an economic development perspective of, ‘How do we help an economically distressed area … by utilizing public funds and public goods to really transform the area?’”•