Hoosiers might have the chance to shop sales-tax-free for a couple of weeks this summer, if a Senate bill succeeds in the Legislature.

Indiana would be following the lead of 16 other states that have some form of sales tax holiday, including nearby Ohio and Tennessee.

Nearly all these states have a tax holiday targeted at families shopping for back-to-school items. Their sales tax holidays typically last two to three days over a weekend in July or August where specific items such as clothing, shoes, school supplies and computers can be purchased with no sales tax applied. 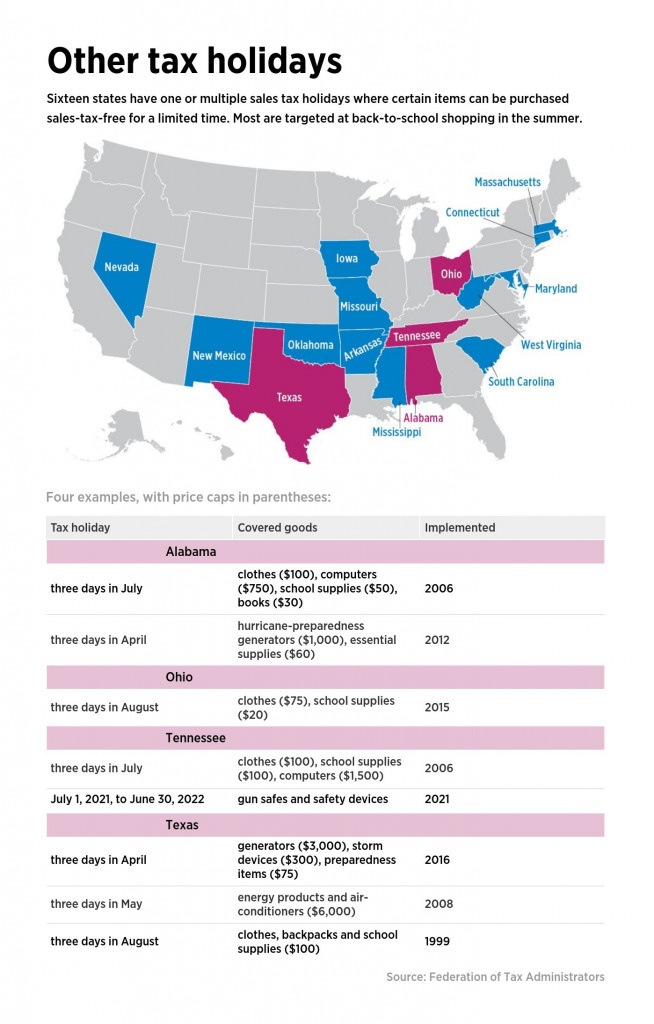 Some states have more than one holiday, with different targets. In Alabama, where hurricanes are common, an additional sales tax holiday—on generators and essential supplies—happens in April, before hurricane season starts. Texas also has a tax holiday in April on generators, storm devices and preparedness items.

Tennessee implemented a second, year-long tax holiday last year, to encourage gun safety. Purchases of gun safes and safety devices are tax-free from July 1, 2021, to June 30 this year; the Tennessee General Assembly is considering a bill to extend that holiday for another year.

The Indiana tax holiday proposed in SB 325 is much broader than any other state’s. It proposes a temporary tax reprieve on any retail purchase. Holdman, who’s from Markle, told IBJ in an interview earlier this month before he filed the bill that he wanted the tax holiday to target families purchasing clothes, school supplies and other large items.

The fate of the bill and where Senate GOP leadership might stand on it is unclear. Holdman declined another interview with IBJ after SB 325 was filed, saying he wanted to wait a few weeks before speaking on the topic.

SB 325 adds to the mix of several tax-cut proposals under consideration at the Statehouse this year, as lawmakers bask in the glow of a budget surplus that is projected to rise to $5.1 billion by July.

House Republicans are pushing forward with their broad, $1 billion individual and business tax cut plan. Senate Republicans have expressed more caution, wanting to see how the state economy fares after an influx of federal pandemic relief money runs its course.

The unrestricted sales tax holiday as now proposed in Holdman’s legislation would result in a decrease next year of $492 million to $537 million for state coffers, according to the Legislative Services Agency.

The fiscal analysis is based on the experience of Massachusetts, which held similar unrestricted sales tax holidays in 2014 and 2015 and saw retail purchases rise 40% above normal during the holiday windows.

The tax holiday likely would be particularly welcome to Indiana consumers.

The Hoosier state has one of the highest state-level sales tax rates in the nation, second only to California’s 7.25% and tied with that of three other states at 7%, according to the Sales Tax Institute.

However, several states allow broad local sales taxes that can combine to push up the overall sales tax, putting Indiana’s rate near the middle of the pack, the Tax Foundation reports. Tennessee’s combined rate, 9.55%, is the nation’s highest.

Molly Frische, owner of Brick Street Boutique in Franklin, said having a tax holiday would likely increase the number of customers coming to her store, and they might buy more items. She said sometimes customers might hold off spending on more expensive items because of the sales tax.

“Even though everyone understands, yes, there is the sales tax, sometimes it’s like, ‘Oh, I didn’t consider that when I thought about how much I was going to spend today,’” Frische said.

Brick Street Boutique sees mostly adults or young adults buying clothes, so back-to-school shopping is not necessarily a busy season for the shop. But a lot of customers shop for seasonal fall clothes at the boutique, and a sales tax holiday in July would be perfect timing for that, Frische said.

“Our customers tend to love fall clothing,” she said. “If there was no sales tax going to be charged for a certain period of time, people would plan their shopping sprees for during that time to avoid the added sales tax.”

Sales tax holidays in other states are highly favored by customers and businesses, Rachelle Bernstein, vice president and tax counsel at the National Federation of Retailers, said in an email to IBJ.

“These tax-free events can help drive customers to stores, and result in increased sales, because customers may purchase additional items that they were not shopping for that day,” Bernstein wrote.

The Indy Chamber has not taken a position on the proposed tax holiday, Government Affairs Director Adam Burtner said in an email. But he said the chamber is generally supportive of helping families and retailers that would benefit from such a reprieve.•