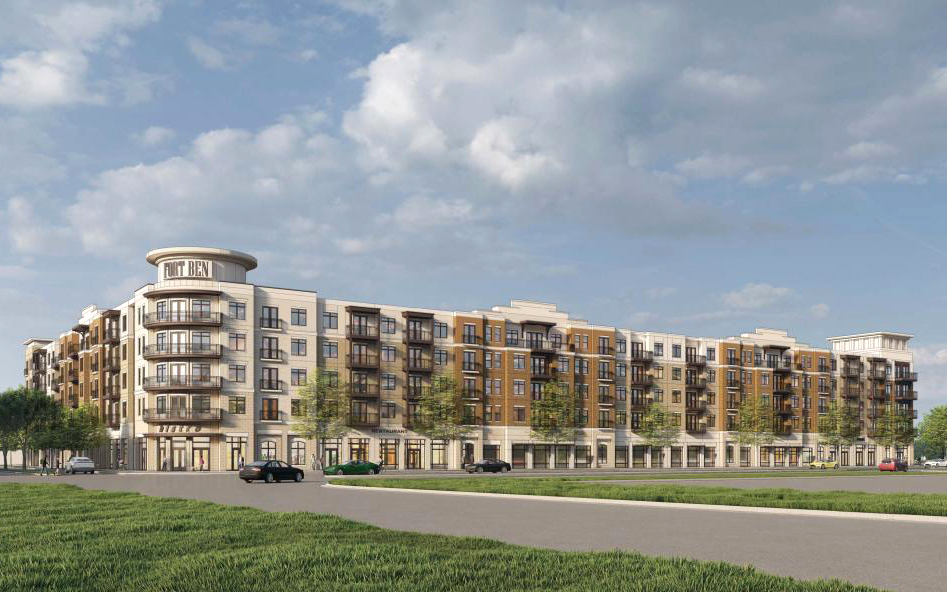 A conceptual rendering of Keystone Group's planned project on East 56th Street in the Fort Benjamin Harrison area. (Image courtesy of the city of Lawrence)

The developer has been working for more than a year with the Fort Harrison Reuse Authority to outline the project and acquire a 3.8-acre parcel on the north side of East 56th Street between Lawrence Village Parkway and Melner Drive.

The mission of the reuse authority, which owns the parcel, is to encourage economic development on land formerly used by the sprawling Fort Benjamin Harrison Army Base, which was decommissioned in the 1990s.

Portions of the base have since been redeveloped for a variety of uses, including private homes, retail and office space, an Ivy Tech Community College campus and a YMCA branch.

The Keystone project “will be the most ambitious private undertaking that the City of Lawrence has ever seen,” Jeff Vest, president of the reuse authority, said in a media release. “The goal for this project is what the FHRA envisioned when the board was created in 1995 and will anchor the final portions of the former military base remaining to be redeveloped.”

The Lawrence Common Council voted unanimously (8-0) on Oct. 3 to issue up to $12.5 million in bonds to help fund the project, which Keystone and FHRA said was necessary to make the development feasible.

Through the creation of a tax-increment financing area, property taxes from the new development will be used to pay off the bonds over 25 years, according to Bruce Donaldson, a partner with Indianapolis-based law firm Barnes & Thornburg, representing FHRA.

The developer has agreed to back the bonds, meaning that Keystone will be responsible for any potential funding shortages, not the city.

FHRA has offered the 3.8-acre parcel of land to Keystone for $10 as an incentive to go ahead with the project, according to Heather Millikan, FHRA’s executive director.

A low acquisition cost “has been one of the few incentives that the FHRA has been able to offer on projects of this scale,” Millikan told IBJ. “We viewed the incentive as an opportunity to attract a project of this scale and importance to the Fort Ben community. The economic value of this project is significantly greater than the incentive provided.”

The five-story building is designed to be U-shaped, with the central portion poised along 56th Street to highlight the first-floor retail offerings and create a high-visibility, signature project for the area, according to Kelly Mulder, vice president of development for Keystone.

The retail space likely would be split between one or more restaurants and other offerings, potentially including a grocery.

The apartments would be located on the upper four floors, with about 60% of the units set aside for studios and one-bedroom abodes, and the remaining 40% for two-bedroom units.

The interior finishes would include wood flooring and stainless-steel appliances. “It’s going to feel like a modern house, more than an apartment,” Mulder said.

The exterior would be a mix of colored bricks, stone at the base and glass.

Mulder assured Lawrence councilors that Keystone had no plans to flip the property to a new owner after completion. “Everything we build is a long-term hold,” he said.

Keystone still must submit its final plans to FHRA and Lawrence officials for architectural and construction review. Assuming approval, construction of the project is expected to begin mid- to late-2023, with completion potentially in late 2024.

“We are delighted to have Keystone Group as part of the Lawrence community,” Lawrence Mayor Steve Collier said in a media release. “The addition of this mixed-use development will bring new businesses and restaurants to Lawrence for our residents and visitors to enjoy while helping meet the housing needs in our growing city.”