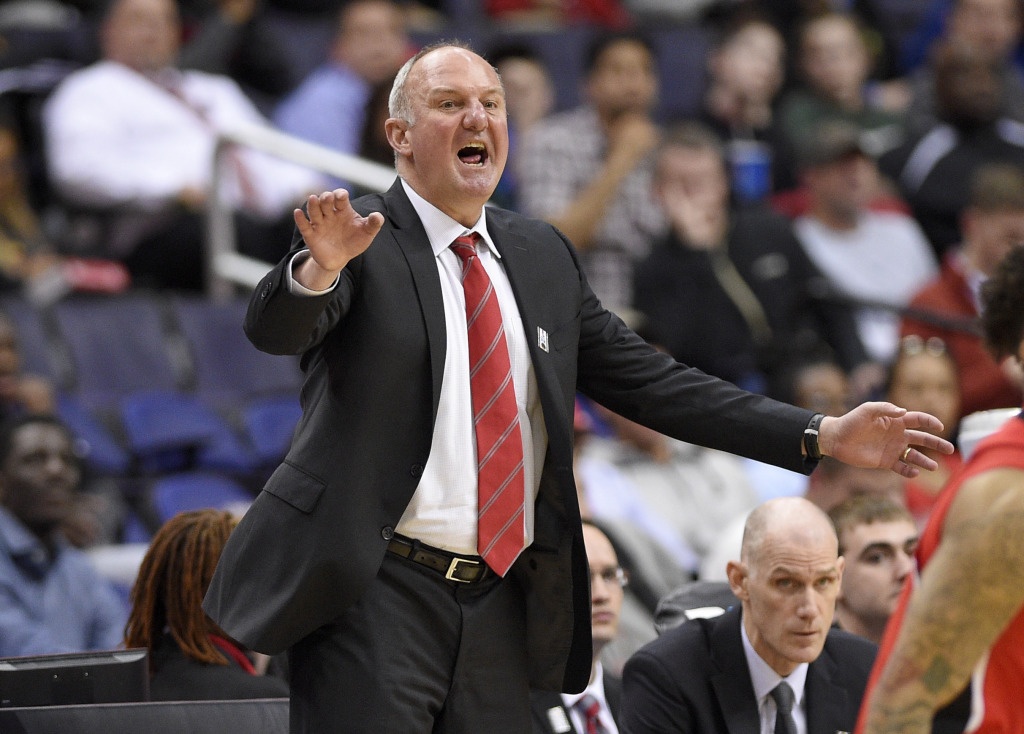 In this March 8, 2017, file photo, Ohio State head coach Thad Matta gestures during the second half of an NCAA college basketball game in the Big Ten tournament against Rutgers, in Washington. Butler University has named Matta its next head coach. (AP Photo/Nick Wass, File)

This time, he hopes to stick around a little longer—with a familiar script that helped the Bulldogs reach unprecedented heights in the decade following his departure.

On Wednesday, more than 20 years after Matta left his alma mater, the 54-year-old former Ohio State University basketball coach was reintroduced to a fan base that embraced him for three seasons as a player, six seasons on the coaching staff and that one, memorable season he ran the show.

It seemed he never left.

The Bulldogs appreciate Matta, too.

They like the fact he’s a proven winner with a championship pedigree who has a deep understanding of Butler’s unwavering principles. Matta said he coined “The Butler Way” one day after then coach Barry Collier accepted the Nebraska job, putting Matta in line as the replacement.

“I had no idea that The Butler Way was going to stick the way it did,” Matta said, drawing laughter. “There’s something special about a Butler guy. So when the call came, I wanted to get back and be a Butler guy again.”

This will be a very different situation from the one Matta inherited in 2000-01.

Back then, the Bulldogs were an emerging mid-major power. They posted a then school-record 24 wins in Matta’s first and only season, won the Midwestern Collegiate Conference tournament title and beat Wake Forest for their first NCAA Tournament win since 1962.

When Butler lost to Arizona in the second round and Matta left for Xavier, many thought the Bulldogs had peaked. But as Matta continued winning with the Musketeers and later at Ohio State, where he posted a school record 337 of his 439 career wins, Butler’s program continued to ascend.

Despite going through five coaches and two conference changes over the next 17 seasons, the Bulldogs made 11 more NCAA tourney appearances—a run that included back-to-back national runner-up finishes in 2010 and 2011.

Now Matta must rebuild a program that hasn’t appeared in an NCAA tourney since 2018 (although it probably would have made it in 2020 when the event was canceled because of COVID-19) and hasn’t been to the Sweet 16 in five years. Butler also is coming off its first back-to-back losing seasons since 1988-90

So Collier, now Butler’s athletic director, fired his former player, LaVall Jordan, last week and replaced him two days later with his former assistant. The 42-year-old Jordan was Butler’s first Black basketball coach and only the second coach the Bulldogs fired in 96 years. Joe Sexson, Collier’s predecessor, was the other in 1989.

“We looked all over the world for this kind of man and we found him across the street,” Collier said, referring to Matta’s nearby house.

Yes, Matta said, he had other head coaching offers over the past five years but none felt right. Plus, there were lingering questions over Matta’s health.

He agreed to leave the Buckeyes following the 2016-17 season over concerns that chronic ailments related to a back surgery he had in 2007 affected Ohio State’s results. Matta used a taller chair to endure practices and games for several years and his last season in Columbus, Ohio, marked the only time he failed to win at least 20 games.

Chris Holtmann then left Butler and was hired as Matta’s successor.

Two days after Jordan’s firing, Collier made the offer and Matta didn’t hesitate to accept.

While Matta hasn’t decided whether to use the chair or prioritize hiring an assistant with head coaching experience in case the physical ailments return, he plans to work the transfer portal, try to keep players on Butler’s current roster on campus and finish the job he and Collier started all those years ago.

“I have done every single thing you can do in coaching except one—a national championship. I’ve played for it,” Matta said. “I say that from the standpoint of where the goal is and what the mission is. This program has been to that level and that’s what we’re shooting for and that’s what we’re going after.”