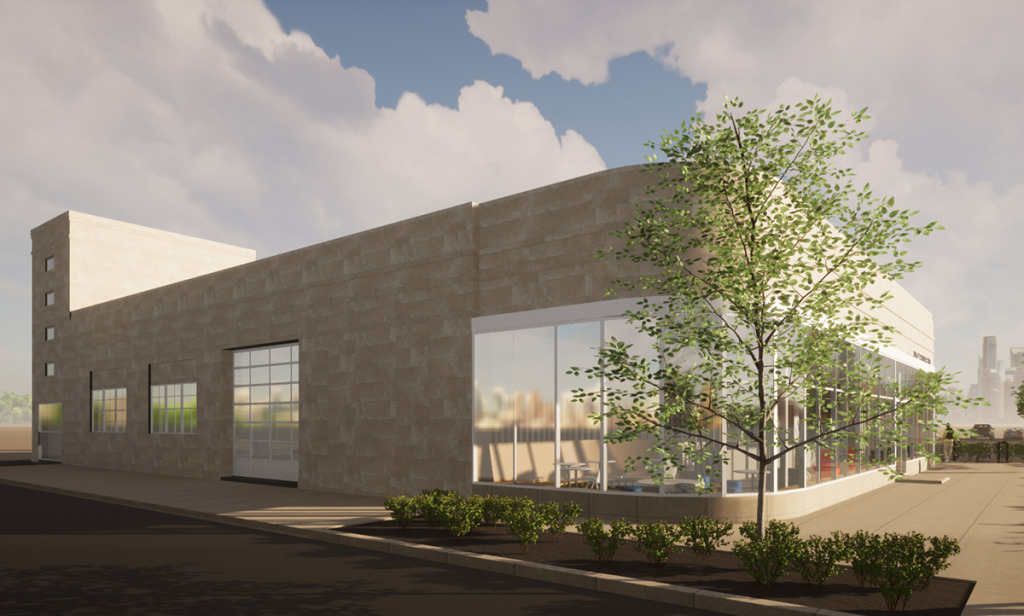 The 17,176-square-foot building at 3902 N. Illinois St., which includes a full basement, has been vacant since the brewpub Happy Brewing Co. closed in October 2018. (Rendering courtesy of One 10 Studio)

The owners of Indianapolis-based Naptown Fitness are hoping to help revitalize a major commercial hub in Midtown by renovating a classic, 83-year-old edifice and adding a gym, a coffee shop and several community-minded tenants

The 17,176-square-foot building at 3902 N. Illinois St., which includes a full basement, has been vacant since the brewpub Happy Brewing Co. closed in October 2018 after seven months at that location. Prior to that, the building had served as a Double 8 Foods grocery store.

The smooth limestone building with streamlined Moderne design touches (including a rounded corner facing Illinois Street) originally opened in 1938 as the Hoster-Hiser Ford and Lincoln-Zephyr car dealership. It includes an elevator that was used to move cars between a service department in the basement, a first-floor showroom and rooftop storage.

Currently, the partners are finalizing their financing and construction bids, with the goal of beginning construction within the next 30 to 45 days, Byczko said. Based on a spring construction start, the building should be ready for tenants by early 2022.

The partners are pursuing National Historic Landmark status for the building so that they can qualify for tax credits for renovating the structure.

The project architect is One 10 Studio.

Naptown Fitness plans to open a fitness center in about 5,000 square feet of the building’s street level, with a 1,000-square-foot yoga studio in the basement.

The fitness center will be a replacement for Naptown’s location at 5255 Winthrop Ave. in Meridian-Kessler, which closed late last year due to the pandemic.

In addition to the fitness spaces, the Illinois Street facility will also include a street-level coffee shop of about 2,000 square feet, plus patio seating. Byczko declined to say who will operate the coffee shop because the deal hasn’t been signed yet, but he said it will be a locally-based company.

The coffee shop will offer some food items and lower-cost menu options, Byczko said, in acknowledgement that the neighborhood is classified as a food desert because it lacks a grocery store.

“We’re trying to be as cognizant as possible of blending and making this space as available as possible to all people,” Byczko said.

The partners are still looking for tenants for the remaining 5,000 square feet of basement space. Byczko said tenants could include community groups or not-for-profit groups. He has visions of using the space as a springboard for a number of community partnerships such as a mentorship program for minority youth; and free fitness classes in Tarkington Park, which is directly across Illinois Street.

The 38th and Illinois Street commercial hub has been the focus of much attention in recent years with the renovation of Tarkington Park and being named among several neighborhoods targeted for redevelopment support from the Local Initiatives Support Corp.