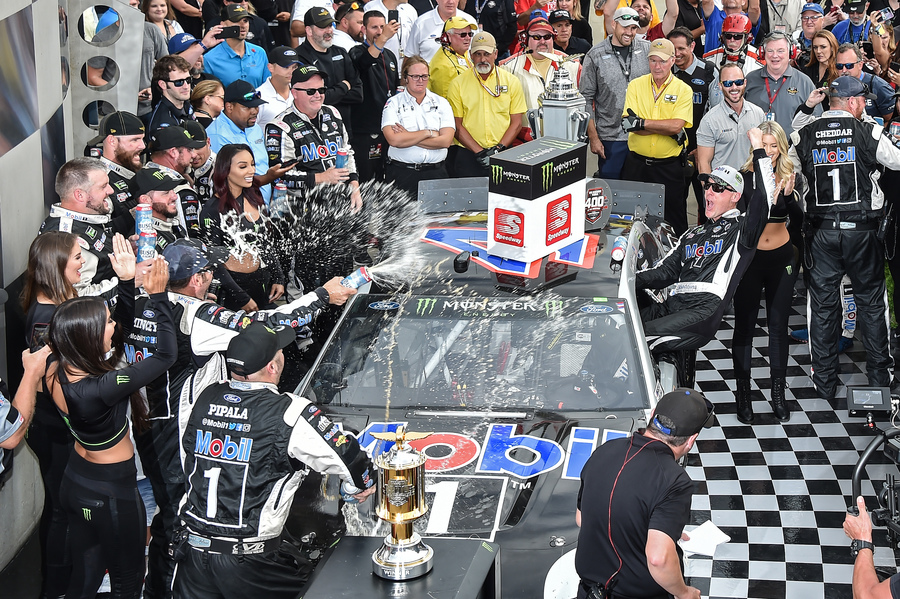 Kevin Harvick climbs out of his car celebrating after winning the 2019 Brickyard 400 race at the Indianapolis Motor Speedway. (Photo courtesy of IMS/John Cote)

The Brickyard 400, which has taken place on the oval track at Indianapolis Motor Speedway every year since 1994, will be moved to the speedway’s road course in 2021, IMS officials announced Wednesday.

The 28th annual running of the race will be part of a doubleheader in which IndyCar will race on the road course on Aug. 14, followed by the NASCAR race on Aug. 15, making it a doubleheader for the second year in a row.

It will also mean a date change for the race. This year’s Brickyard 400 took place July 5 before empty stands at IMS.

The road course at IMS is nearly 2.5 miles long and has 14 turns.

NASCAR promised radical changes to the 2021 schedule and delivered Wednesday with six road courses, the first dirt race for the Cup Series since 1970 and new stops in Nashville, Tennessee, and Austin, Texas.

Atlanta Motor Speedway and Darlington Speedway in South Carolina each added a second race to their schedules.

“Brickyard Weekend” also will feature a new IndyCar Series race, making it a doubleheader for the second year in a row.

Indianapolis joins Road America in rural Wisconsin and the Circuit of the Americas in Austin as new road course events on a schedule that already included Sonoma (Calif.) Raceway, Watkins Glen (N.Y.) and the Charlotte Roval. NASCAR for decades ran at just two road courses eac season and will now have six to satisfy fans who have begged for more diversity on the schedule.

“Everything is bigger in Texas, including our passion for NASCAR and NASCAR will be even bigger and better in Texas in 2021 with the addition of this race in Austin,” Texas Gov. Greg Abbott said.

The All-Star race began in 1985 and was held at Charlotte Motor Speedway every year but one until this season, when the pandemic caused a relocation to Bristol Motor Speedway in East Tennessee.

Bristol will also experiment with a dirt race by filling the 0.533-mile bullring with dirt for the first race of its kind since Richard Petty won at the half-mile State Fairgrounds Speedway in Raleigh on September 30, 1970.

The March 28 dirt race will replace Bristol’s traditional spring race on the concrete as NASCAR chose the track over dozens of existing and proven dirt tracks across the country. The most noticeable snub was to the Tony Stewart-owned Eldora Speedway in Ohio, which hosted the Truck Series from 2013 until this year’s race was canceled by the pandemic.

Kentucky Speedway is off the schedule for the first time since 2011. The original owners of the track in Sparta filed a federal lawsuit against NASCAR for the right to host a Cup Series race and the fight dragged on from 2005 until 2009. Speedway Motorsports eventually bought the property and moved a race to Kentucky in 2011.

The battle to land Cup races has long been difficult as NASCAR controlled the schedule and tracks paid sanctioning fees to host events. Because NASCAR also owned most of the major facilities, it controlled the market and dictated which tracks got Cup races.

Little has changed to the schedule since Kentucky was added, and in 2015 NASCAR signed five-year sanctioning agreements with the tracks that guaranteed race dates through 2020. The contracts left little room for overhaul, but NASCAR understood fans had grown disgruntled with the same old schedule.

NASCAR vowed to address it in 2021, the first year after the contracts expired. The pandemic this season forced a slew of changes, including doubleheader weekends, midweek races and a shared weekend with IndyCar.

The 2021 schedule has no midweek races on it because television ratings did not match the perceived fan enthusiasm for Wednesday nights.