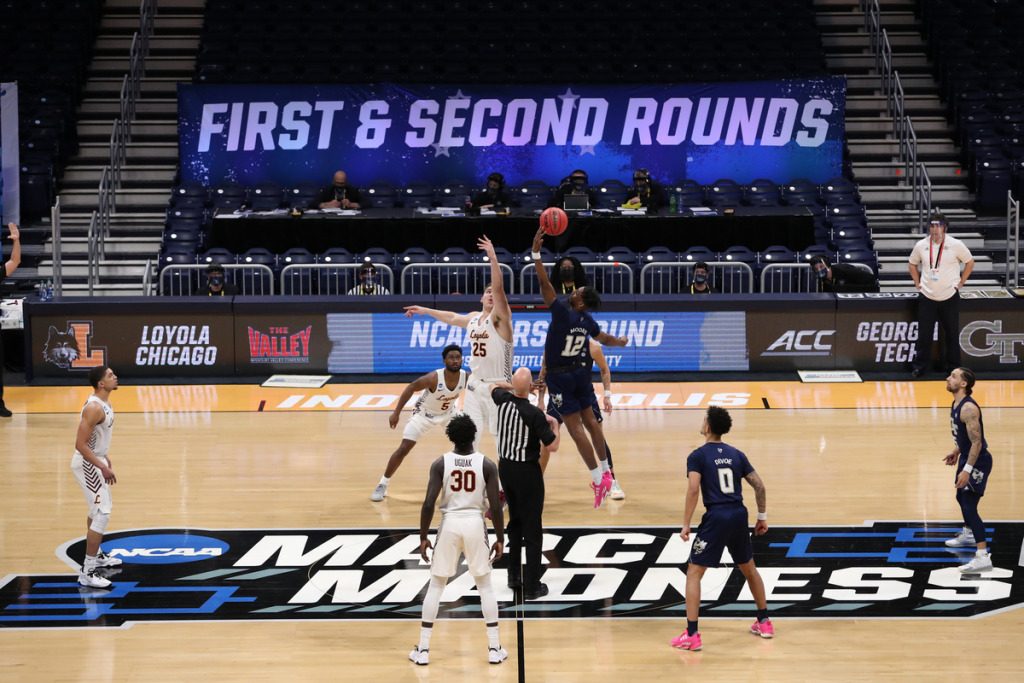 Cameron Krutwig, #25 of the Loyola Chicago Ramblers, and Khalid Moore, #12 of the Georgia Tech Yellow Jackets, compete for the opening tipoff in the first round of the 2021 NCAA Division I Men’s Basketball Tournament at Hinkle Fieldhouse on March 19, 2021, in Indianapolis. (Photo by C. Morgan Engel/NCAA Photos via Getty Images)

The NCAA men’s basketball tournament bolstered the local economy by about $46.5 million when it was held in central Indiana earlier this year, according to a new research report.

Information from the report, conducted by West Chester, Pennsylvania-based research firm Rockport Analytics, was released Thursday by the Indiana Sports Corp., which commissioned the study.

Because of the COVID-19 pandemic, the entire tournament was played in one state for the first time. The study found about 66,000 “unique fans” attended games in Indianapolis, Bloomington and West Lafayette during the tournament, which took place from March 18 to April 5. Total attendance for the 68-team event was 173,592.

The report, which the Indiana Sports Corp. declined to release in its entirety, found about 850 jobs were supported by the tournament, specifically at hotels, restaurants and event venues.

The largest amount of spending involved hotel rooms, transportation and dining and entertainment, which together accounted for about 88% of the total, according to Ryan Vaughn, president of the Indiana Sports Corp. The remainder of the financial impact came from game tickets and other unidentified ancillary expenses.

The economic impact figure was much lower than the amount that had been anticipated pre-pandemic for the NCAA Final Four alone. That amount had been pegged at upward of $100 million for the city in tourism and restaurant dollars. The number also was far lower than the nine-figure sum that local officials teased when they made an announcement in January about the area officially playing host to the entire event instead of just the Final Four.

But Vaughn said his organization is satisfied with where things ended up, calling the event a “tremendous success,” particularly since it brought in 300% more tourism revenue compared to the same period in 2020—when the city first shut down due to COVID-19.

“The economic impact … I thought was fantastic—I feel really good about it,” Vaughn told IBJ. “The brand exposure was even more than we anticipated, so if one pendulum swung one way, this one swung the other. Putting Indianapolis on the [international] media stage for every bit of three-and-a-half weeks was pretty great for us.”

The NCAA said total attendance was 111,000 in the first and second rounds of the tournament, although none of the six host sites accommodated more than 25% of their typical capacities due to COVID protocols. Games were played at Assembly Hall in Bloomington and Mackey Arena in West Lafayette, and at Indianapolis venues Gainbridge Fieldhouse, Hinkle Fieldhouse, Indiana Farmers Coliseum and Lucas Oil Stadium.

Economic impact studies are done for most major events hosted in Indianapolis—particularly sports—to evaluate the financial benefits such activities have on the city’s economy.

Rockport has done several studies on Indianapolis-area facilities and events in the past, including a 2015 study of Grand Park, multiple reports for Visit Indy and the 2012 Super Bowl economic study. Another economic impact report is expected to follow the College Football Playoff Championship Game in January, with that game expected to bring $150 million to Indianapolis over a four-day period.

Vaughn said the dollar figures in the studies don’t measure the full effect of the events.

“There are real stories that go beyond just the roughly $47 million in impact,” he said. “These are moments that change the economy trajectory of a person’s life, because we’re able to host these events.”

He said the impact of the NCAA tourney was especially meaningful considering the pandemic.

“There was probably no industry hit as hard—absent maybe the airline industry—as tourism was during this pandemic, so … to infuse events like this back into the economy in a city that was relatively stale downtown and bring people back to work, there’s heart behind that number. It’s not just a number that should just be casually dismissed. These are real people.”

— The lowest attendance for a game in the tournament was the First Four game between Texas Southern and Mount St. Mary’s at Indiana University, which featured 232 spectators. The game wasn’t open to the general public.— The two Final Four games were attended by 8,131 people each, compared to the championship game, which was attended by 7,923.— The average attendance for the tournament’s 65 contests was 2,671, with a median of 1,292.