From a look at the numbers, Indiana is not a great place to buy health coverage through the Affordable Care Act marketplace.

While the number of insurers selling plans around the country in 2020 is increasing by one-third over this year, the choices in Indiana have decreased in recent years. Just two insurers—CareSource Indiana and Celtic Insurance—are offering individual plans next year. That’s down from nine in 2015.

And unlike the rest of the country, where prices are dropping an average of 4%, prices in Indiana are climbing next year: an average of 4.9% on CareSource’s plans and 18.9% on Celtic’s.

Meanwhile, marketplace enrollment in Indiana is falling sharply—down 32% since the state peak in 2015, compared with a decrease of just 2% nationally during the same period.

Add it all up, and it looks like troubling news for Indiana, a state with a higher percentage of people lacking medical insurance (8.3%) in 2018 than any neighboring state, according to the U.S. Census Bureau. Research shows people with health insurance are more likely to receive preventive and screening services and are better able to manage chronic conditions.

Indiana ranked 41st last year in overall health, down three spots from 2017, according to America’s Health Rankings, a national snapshot of the nation’s health issued by the United Health Foundation, which measures such behaviors as drinking, smoking, drug use and physical activity.

For people who want to get or stay healthy, and aren’t covered by employer health plans, this is the time of year to go shopping for coverage.

Open enrollment on the Affordable Care Act marketplace—also known by its supporters and opponents alike as “Obamacare”—runs through Dec. 15. Plans cover essential benefits such as doctor’s care, hospitalization, prescription drugs and behavioral health. They also cover, at no additional cost, preventive services such as annual physicals, cancer screenings and prenatal care. All plans take effect Jan. 1.

It’s the seventh year for the marketplace exchanges, which were set up with the goal of providing comprehensive coverage at affordable prices and reducing the number of Americans without health insurance. 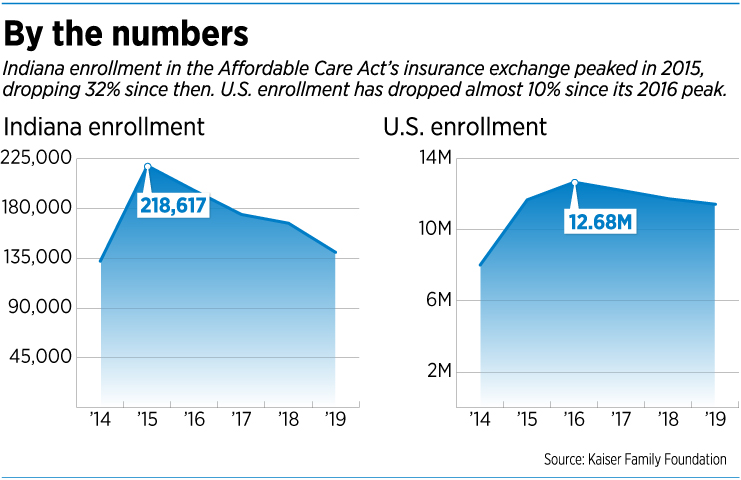 People who don’t qualify for income-based assistance must pay full price, and that’s before any deductibles and copays.

This year’s enrollment period, however, comes during a time of uncertainty. The Trump administration is asking a federal appeals court in New Orleans to overturn the entire Affordable Care Act as unconstitutional. A decision could be handed down any day.

Nationally, 11 million people are covered through the marketplace, down from a peak of 12.68 million in 2016. Two years ago, a Republican Congress repealed the so-called “individual mandate”—the requirement that everyone buy health insurance or pay a stiff penalty. Some say that probably played a part in pulling down enrollment numbers in Indiana and nationally.

“The shift to zero tax penalty for the individual mandate does not help or encourage new entrants,” said Paul Ashley, managing director of First Person Advisors, an Indianapolis-based benefits firm.

But other factors are at play in Indiana. In 2015, just as Indiana’s marketplace enrollment swelled to a high of 218,617, the state dramatically expanded its Healthy Indiana Plan, a Medicaid program for low-income residents funded under the Affordable Care Act. In one year, the plan, now known as HIP 2.0, grew from about 40,000 people to nearly 400,000.

That move “directly contributed to migration out of exchange plans and onto HIP 2.0 and other Medicaid programs in 2016,” Ashley said.

And there’s another factor that might be draining off enrollment. Some people buy Obamacare plans when they are between jobs, or for just a few months until new coverage kicks in from a new job. 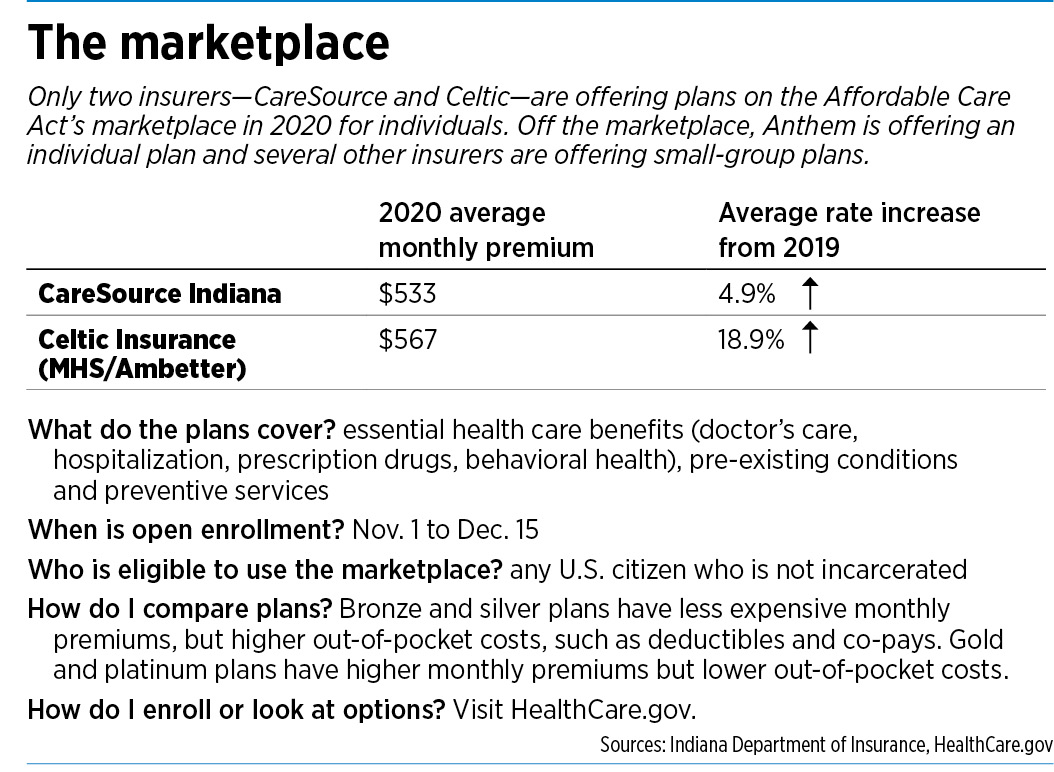 But under a new Indiana law, insurers since July have been able to sell short-term plans (up to 364 days, which can be renewed up to three years) on the private marketplace. Eight insurers offer short-term plans in the state, possibly attracting customers who previously bought short-term, temporary plans on the public exchange.

In addition, Indiana does not have a reinsurance plan—a state-approved plan that protects insurers from very high claims. The plans usually are set up to have a third party pay part of an insurance company’s claims once they pass a certain amount. Ten states—including Oregon, Colorado and Wisconsin—have reinsurance plans.

In states without such plans, insurers have been leery to stick around on the public exchanges. Just four years ago, Indiana’s list of insurers offering plans on the marketplace included Anthem, Aetna, Physicians Health Plan and MDwise Marketplace. All have since dropped out, many blaming steep losses from a sicker population than in the private markets.

Some insurance experts say they don’t expect that to change anytime soon.

“I don’t hear any great enthusiasm for jumping back in,” said Stan Jackson, chief innovation office at Indianapolis-based Apex Benefits.

David Blish, director of health care for consulting firm Katz Sapper & Miller, said “insurance pickings will be slim” until the financial stability of exchange products is improved and the uncertainty of the Affordable Care Act is settled in court.

Indianapolis-based Anthem said it has no immediate plans to return to the marketplace in Indiana, although it sells ACA plans in several other states, including California, Colorado and New Hampshire, and parts of New York, Kentucky and Georgia.

So what does that portend for the future of President Obama’s signature law? Could enrollment continue to slip—in Indiana and across the nation—and the number of uninsured people continue to climb?

Some say that, while the law has faced a huge amount of pushback from insurers and political opponents, they aren’t writing it off yet.

“There has been an overall decline in marketplace numbers across the nation,” Terry said, “although nowhere near the predicted ‘Armageddon’ death spiral numbers.”•