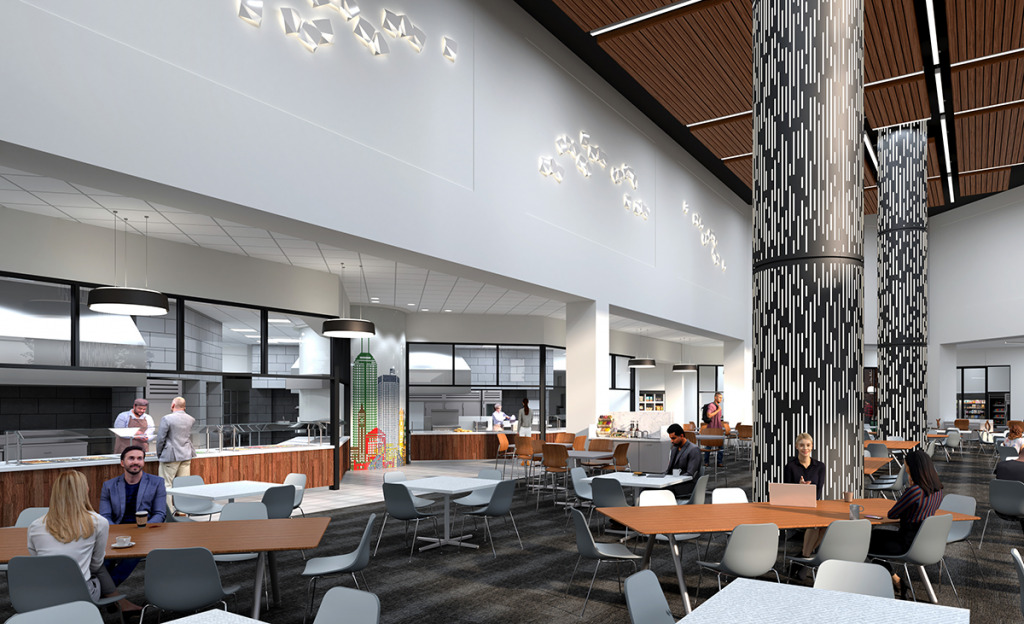 The new restaurant, an 18,267-square-foot space that has been rebranded as Atrium Market, is set to open in late November. (Image courtesy of OneAmerica)

OneAmerica Tower, the downtown headquarters of insurance and financial services firm OneAmerica, is in the final stages of a major renovation to its in-house restaurant and coffee shop, which have been dark since Sahm’s Restaurant Group closed its cafeteria there a year ago.

As was the case previously, both the restaurant and the coffee shop will be open both to OneAmerica Tower tenants and to the outside public. They’re located on the ground floor.

The coffee shop will operate from 7 a.m. to 5 p.m. The restaurant, which will serve food between 7 a.m. and 2 p.m., will feature three separate serving stations, each devoted to different menu options: burgers/wraps, pizza/pasta, and sandwiches/salads.

Another area will offer freshly made packaged salads, sandwiches, and snacks between 7 a.m. and 4 p.m.

The Atrium Market space will also include a designated area where customers can pick up food that they’ve ordered and paid for online or via an app.

The remodeling projects mark the first significant upgrades to OneAmerica’s public eateries since the company moved into the building in 1983, said David Lies, OneAmerica’s vice president of real estate. “It’s an investment that we needed to do.”

Lies declined to say how much OneAmerica is investing in the renovations but called the upgrades significant. “We completely gutted it, took it down to the studs and concrete.”

Chicago-based Quest Food Management Services will operate both the restaurant and the coffee shop. Quest will also offer catering from this location.

Sahm’s, which had operated a cafeteria and catering operation at OneAmerica since 2009, decided to close that location in October 2020 because the pandemic and work-from-home arrangements had significantly diminished its customer base.

Lies said OneAmerica always intended to bring a restaurant back to the tower because it’s such an important amenity for both tenants and other downtown workers.

Lies said he’s not sure what level of business to expect when the revamped restaurant and coffee shop reopen, other than to say that they will add a much-needed quick-serve dining option to the downtown landscape.

“We feel like this is going to be a pretty unique situation for downtown that will draw people from inside the tower and outside the tower,” he said.

The company is calling some employees back to the office starting in November, with subsequent waves set to return to the office between November and January.