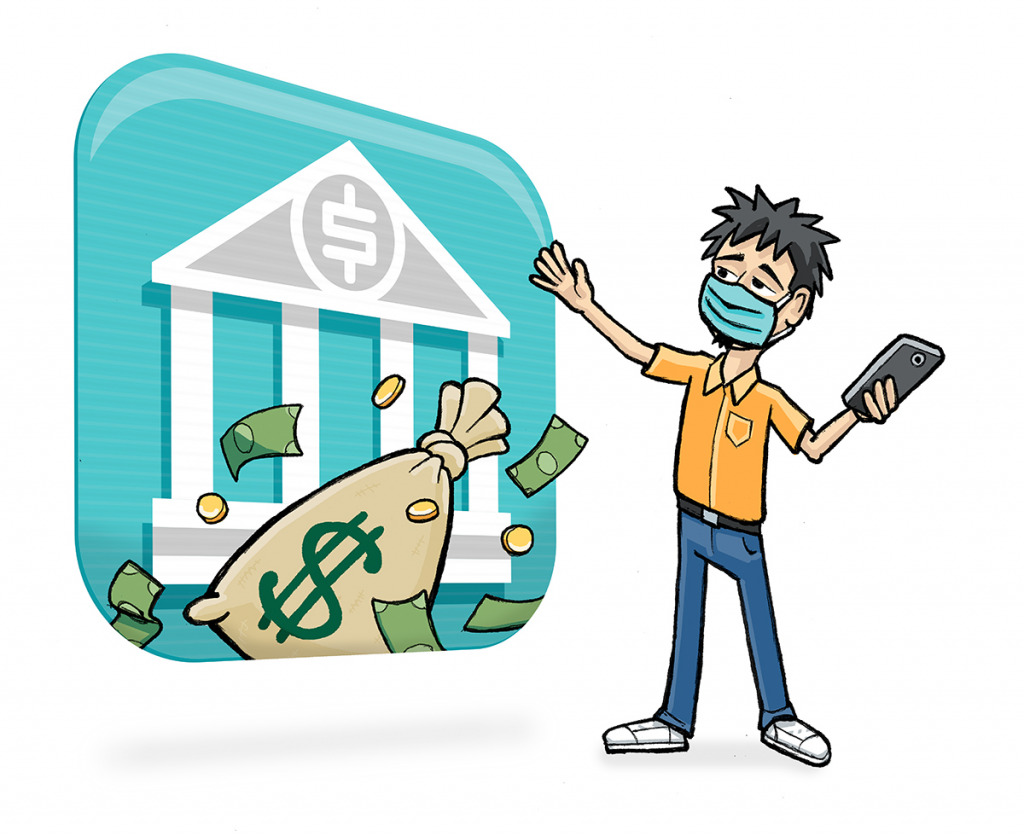 Hoosier banks say the COVID-19 pandemic is accelerating two long-standing industry trends—customers’ migration towards online and mobile banking and the related shift in how they use brick-and-mortar branches.

During shutdowns this spring, banks largely closed their branch lobbies to customers, conducting most of their business via drive-thru, phone and online. But even as branches have reopened, banks say digital banking activity remains higher than it was just a few months ago.

Before the pandemic, Reagin said, about 52% of customers used the bank’s mobile app and nearly 60% banked using North Salem’s website. During the COVID-19 shutdown, the bank saw a 5% increase in the number of customers using the app, and an 18% increase in online banking.

The bank reopened its branches June 1, Reagin said, but “we continue to see heavy use of both mobile and online banking.”

“For the latest of adopters, [COVID-19] started to sensitize them to the fact that, ‘Maybe it’s time to learn what the bank offers so that I can distance myself from a live person and decrease my risk during the pandemic,’” said Mike Baker, CEO of Brownsburg-based State Bank of Lizton. The bank has nine branch locations in Boone and Hendricks counties.

First Merchants also saw a big bump in new online account openings, Stewart said. Before the pandemic, only 4%-5% of customer accounts were opened online. During the first three months of the pandemic, that jumped to 12%.

Fifth Third Bank has seen a 20% increase in mobile logins since the beginning of the pandemic, regional President Kevin Hipskind said via email. About two-thirds of the bank’s consumer transactions are digital.

Customers are handling a wide variety of transactions digitally, Hipskind said, including sending and receiving money and setting up mobile alerts. “We’ve seen customers using all of their options because of the stay-at-home orders, as well as general caution about going out.”

The vast majority of banks use digital platforms developed by third-party vendors, and those vendors are seeing a big increase in demand.

Baker Hill specializes in cloud-based lending software for banks and credit unions. Its customers range from small community lenders with assets of $500 million or less to “super-regional” banks with operations in multiple states and assets of $500 billion or more.

Mike Horrocks, the company’s vice president of product management, said the rollout of the Paycheck Protection Program spurred many banks to upgrade their digital offerings. “I think it really forced everyone’s hand in terms of digital.”

The PPP, which launched in early April, offers forgivable loans to help small businesses weather the pandemic. The Small Business Administration is overseeing the program, but banks and other lenders are the ones submitting applications. Applications must be submitted using an online portal, and early interest in the program was high. In the first few weeks, the portal was clogged with lenders scrambling to submit applications before funding ran out. (Congress appropriated a second round of funding after the initial round was depleted.)

“I think when you have that combination of fear of COVID-19, volume and user experience and you have all three of those coming together, that created the perfect storm to realize, ‘Wow. We have to digitize and we have to digitize fast,’” Horrocks said.

He said health concerns are an especially big driver of the trend in areas hardest hit by COVID-19.

“We have customers in major metropolitan areas and they’re trying to go as digital as they can in their loan applications,” he said.

Reagin, the chief financial officer at North Salem State Bank, said her bank isn’t able to move as quickly as it would like on some digital upgrades because its vendors are so swamped.

“All of the products and services that go along with remote access are just really backlogged right now,” she said.

One of North Salem’s plans is for a “virtual” bank branch staffed by local employees who could help customers complete digital transactions. A customer having trouble accessing an online account, for instance, or who needed help completing an online money transfer, could contact the virtual branch for assistance.

Even before the pandemic, the number of bank branches was in steady decline. According to a Quartz analysis of Federal Deposit Insurance Corp. data, between 2010 and 2019, the number of full-service bank branches in the U.S. fell from almost 95,000 to just more than 83,000.

But bankers say they won’t disappear entirely any time soon.

True, they say, the rise in digital banking has reduced branch traffic in recent years. But those physical offices are still important for a variety of reasons.

Customers might not visit a branch to cash a check or make a deposit, Clark said, but when it’s time to take out a mortgage or discuss financial plans, they still want to meet a banker face to face.

Fifth Third’s Hipskind said the bank’s branch network is “critical to our franchise, as convenience and nearby ATMs are still the No. 1 factor for why people choose a bank.”

And for smaller banks, branches can play an even more integral role.

Robb Blume, president and CEO of Kokomo-based Community First Bank of Indiana, said his bank has seen a bump in digital activity since the beginning of the pandemic, and the bank is continuing to upgrade its digital offerings.

At the same time, Blume said, the bank has built its brand around the relationships it has with its customers.

He also believes branch traffic will largely rebound once the pandemic ends. Community First has six locations, including two branches in Westfield and one in Noblesville.

“We think that’s our strong point, that face-to-face contact,” Blume said. “we want to meet the people we’re doing business with.”•