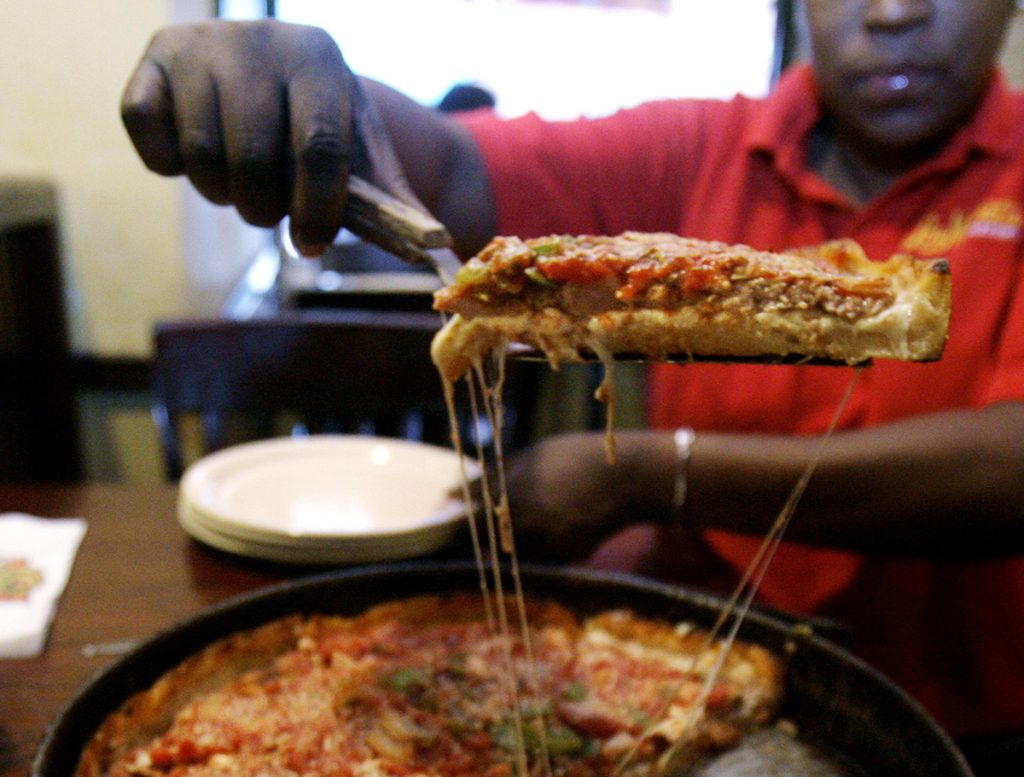 A server dishes up a slice of deep dish pizza at Lou Malnati's Pizza in Chicago. (AP Photo/M. Spencer Green)

Chicago-style pizza chain Lou Malnati’s Pizzeria, which confirmed to IBJ last month that it plans to enter the Indianapolis market with an 86th Street location, is also planning sites in Broad Ripple and Carmel.

The Malnati Organization LLC has purchased a 5,145-square-foot retail building on 0.37 acres at 6320 Ferguson St. in Broad Ripple. The site is just north of the Central Canal and about a block northeast of the Fresh Thyme grocery store at 6301 N. College Ave.

Lou Malnati’s, which is based in Chicago, also has signed a lease for a 1,549-square-foot space at 11435 Spring Mill Road in Carmel. The site is part of The Bridges, a 65-acre mixed-use development developed by Indianapolis-based Gershman Partners and Pittman Partners. The development includes 250,000 square feet of retail space.

The pizzeria will occupy a spot adjacent to the Starbucks coffee shop in that development.

These two Lou Malnati’s sites will join an Indianapolis-area location at 2902 W. 86th St. The 1,600-square-foot space is in the Willow Lake West shopping center just east of Michigan Road, near The Pyramids office complex.

IBJ identified the site in a story in March about the chain’s move into the central Indiana market.

Lou Malnati’s operates full-service restaurants and carryout-and-delivery-only locations. The company confirmed to IBJ last month that the 86th Street location would be for carryout and delivery only.

The company did not immediately respond on Tuesday morning to queries about the two other locations. The sizes of those spaces would suggest that the Broad Ripple location would be full-service restaurant and the Carmel location would offer carryout and delivery only.

A Lou Malnati’s spokeswoman told IBJ last month that the company was unsure when it would open the 86th Street location because of “uncertain times” caused by the coronavirus pandemic. She also said the chain had plans to open additional locations in Indianapolis and the surrounding suburbs “down the road.”

Lou Malnati’s was established by the husband-and-wife team of Lou and Jean Malnati, using a deep-dish pizza recipe that Lou Malnati’s grandfather helped create. The couple opened their first restaurant in the Chicago suburb of Lincolnwood on St. Patrick’s Day in 1971.

When Lou Malnati died in 1978, his sons Marc and Rick took over the company. In 2016, Lou Malnati’s sold a minority stake in the company to Oak Brook, Illinois-based private equity firm BTD Capital Partners so the restaurant chain could focus on growth. The restaurant chain had 46 stores at the time of the BTD Capital deal, according to a 2016 report from Crain’s Chicago Business.

Lou Malnati’s also ships its frozen pizzas to customers throughout the U.S.