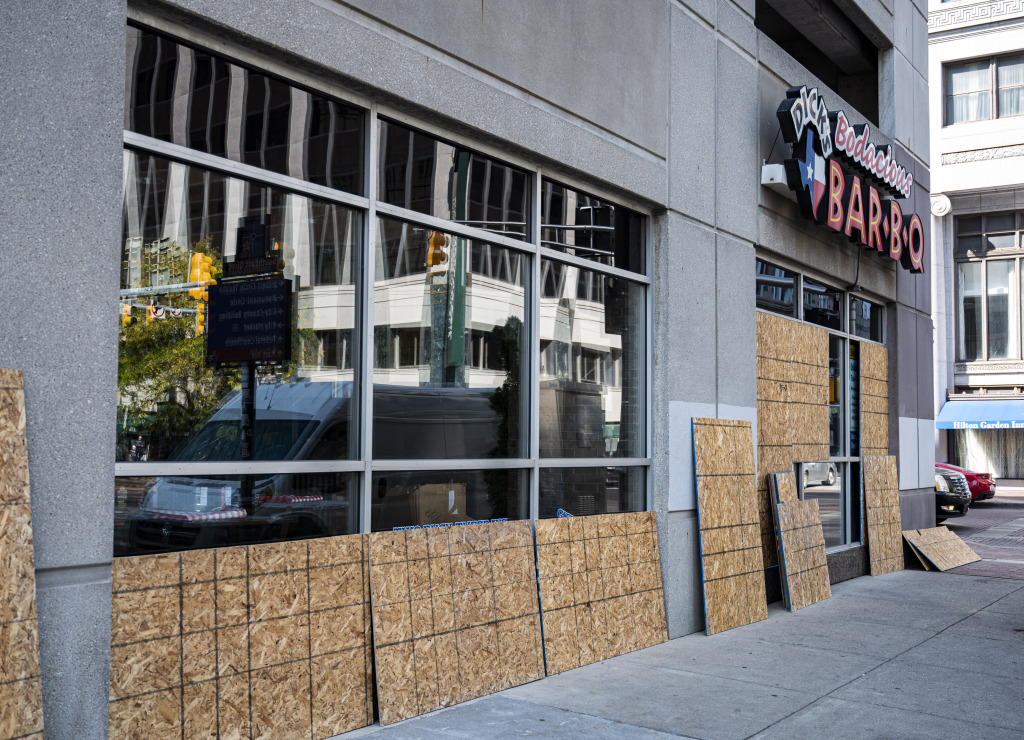 The former Dick's Bodacious BBQ restaurant at the corner of East Market and North Pennsylvania streets is boarded up on Thursday, Sept. 24, 2020.

Local officials say a few small protests are planned this weekend in Indianapolis, but there’s little expectation the demonstrations will give way to destructive rioting like they did in May.

Protests planned for the Indiana Statehouse and elsewhere in the central business district on Friday and Saturday follow a grand jury’s decision this week to not charge white police officers in the March death of Breonna Taylor, a black woman, while executing a search warrant during a drug investigation in Louisville.

Joshua Barker, deputy chief of operations for the Indianapolis Metropolitan Police Department, told IBJ late Thursday that he said he is optimistic the weekend protests—planned for downtown and near the governor’s mansion—will remain peaceful, with no indication those events will draw large crowds or create problems for downtown businesses.

“I think a lot of the community has recognized that the events that unfolded [in May] were counterproductive to the beneficial conversations that are taking place across the country right now about a variety of issues,” Barker said. “I also think that we were plagued with a high influx of outside people who came in with a plan to destroy property, and riot, and cause trouble that weekend.”

He said there’s been little activity or discussion on social media about the protests, indicating that only a small number of people are expected to attend.

Even so, a few downtown building owners are taking precautions, including reinstalling plywood on their building facades to avoid a repeat of the property damage they experienced during riots on the weekend of May 29, which happened following peaceful protests revolving around the death of George Floyd in Minneapolis.

Barker said some of the business owners with whom he has spoken are apprehensive about future protests, but added most do not plan to board up their buildings. He met with a group of about 25 business owners Thursday afternoon.

“The decision to board, that’s a decision that each business specifically is going to have to make,” Barker said. “Right now there’s little to no information that leads me to believe that we’re going to have anything (bad) occur.”

Other cities have seen protests escalate in the two nights following the grand jury decision. Tensions are still running high in Louisville, where two police officers were shot and wounded Wednesday night. Incidents involving violence or vandalism have been reported in Seattle, Portland, Atlanta, Philadelphia, Buffalo, and Durham, North Carolina, among other places.

In downtown Indianapolis, the main entrance to Market Tower, 10 W. Market St., was covered in plywood Thursday afternoon, as was the former Dick’s Bodacious BBQ space at East Market and North Pennsylvania streets. Some businesses—including now-vacant spaces along Washington Street and spots along Monument Circle—have not yet removed boards put in place in the wake of the earlier protests.

Contents of the barbecue restaurant are expected to be auctioned off in the coming weeks, which is why the space is being boarded up, said Sherry Seiwert, president of Downtown Indy Inc.

Other businesses that have been boarded up this time—the figure is in the single digits—have done so because the glass is expensive and difficult to replace, building owners told IBJ. The May riots led to national shortage of plate glass and a backlog of orders for glass-repair companies.

Downtown Indy Inc. is leading a Downtown Recovery Committee initiative aimed at getting businesses back open following both the rioting and the challenges of the pandemic. Barker is part of that initiative, which is intended to create a more integrated security and safety system for the corridor.

Seiwert said most business owners downtown have “made the decision not to board” after discussions with IMPD.

Greg Bires of Windsor Jewelry near Monument Circle, another business ransacked by rioters earlier this year, said he hasn’t decided on whether he will board up his business. But he noted he is taking additional precautions to protect his inventory, which he declined to discuss in detail for security purposes.

Similarly, Mike Wells, president of REI Real Estate Services, which owns the 300 North Meridian office building, said he has opted not to put plywood on the building for now.

“I think you could actually be escalating the situation a little bit if you’re acting like you’re expecting [property damage],” he said. “Right now, we’re in a kind of a hold pattern. We’re prepared to put it up if we have to, but we’re gonna try to see how it develops.”

Chris Karnavas, owner of Jack’s Donuts on West Market Street, said business owners are “on edge” about what could come from this weekend’s protests, but said he is not putting up window boards. His business was one of the most severely damaged during the first night of riots in May.

“I would hope that the Mayor [Joe Hogsett] and government officials will do the right thing and call in the National Guard and it won’t become crazy like it did before,” he said.

“I’ve done enough. The city is responsible—the mayor is responsible—to keep us safe. The mayor’s responsible to keep our businesses safe. And if he doesn’t, shame on him. It’s not my responsibility to keep boarding up and un-boarding. It’s just unbelievable that we would have to keep doing this.”

In a statement, a spokesperson for Hogsett said the city will closely monitor the situation throughout the weekend.

“We continue to work with IMPD and our state law enforcement partners, and we are prepared to respond as necessary to protect the safety of the community, as well as the ability for Indianapolis residents to let their voices be heard,” the statement said.

Barker said IMPD will continue coordinating with the Indiana State Police and the Marion County Sheriff’s Office for this weekend, although it is not clear whether the police department or mayor’s office plans to request assistance from the National Guard.

IMPD is likely to use de-escalation tactics similar to those it used following the first few nights of protests in late May that devolved into rioting, looting and vandalism. Police cut off routes and began using pepper balls and tear gas after some members of the crowd began throwing water bottles and other objects.

Those tactics were used in a more limited manner—mostly to move a crowd gathered at the Statehouse out of the Mile Square, in later protests that took place during a city-wide curfew.

The curfew led to far fewer protesters downtown during the evening hours and little or no property damage on the days that followed. In fact, most all the protests the following week dispersed peacefully, without property damage—including a march to the Governor’s home that ended with an officer walking with protesters as a show of solidarity. Throughout those protests, police had a visible presence, but generally focused more on traffic control than crowd control.

Barker said police have had ongoing conversations with demonstration organizers over the past several months. He estimated about 100 other protests have occurred downtown since early June, none of which devolved into rioting.

“I think IMPD, not unlike any other police department in the United States right now, is cognizant of the fact that our tactics can appear confrontational to individuals who are trying to exercise First Amendment rights,” Barker said. “We want to be conscious that the decisions that we’re making—and the strategy that we’re employing—to maintain order and keep the public safety in downtown Indianapolis, are not seen seeing as confrontational.”

He said regardless of whether there are protests in downtown Indianapolis over the weekend, the corridor is safe for visitors. He said this weekend is an extension of what’s happened across the country since May, but that the situation is far more under control than it was at the start.

“I don’t know that this weekend is any different,” he said. “We have a public safety plan in place. We have a vested interest in seeing a return to downtown. Everybody wants to get back to what Indianapolis … prides itself on doing, and that’s playing host to thousands of people that recognize that downtown is a great place to be with a lot of great things to offer.”

7 thoughts on “Protests in Indy likely this weekend, but IMPD optimistic businesses aren’t at risk”